Delos: introducing Sparta vs Athens introduced the story of the Greek island of Delos. There I referred again to the influence Greece had exercised on Western thought, contrasting Athens and Sparta. I used a 1913 photo of dormitory at my old school to illustrate the concept of spartan.

By coincidence, I then found a copy of a 1923 magazine from that school. This led me to write 1923: Classical Greek in the New England countryside. The editorial sets out the views of a rather precocious schoolboy, William Charles Wentworth, on the continued importance of Classical Greece.

The vision of TAS (The Armidale School) as the Australian centre of Hellenic culture, a place where Australian boys wishing to go to an English university would study, may seem rather quaint now. However, it wasn't seen as unusual then for a TAS boy to go straight from Armidale to study at Oxford or Cambridge instead of Sydney University.

Wentworth himself went to Oxford, as had David Ogilvie a little earlier. Ogilvie was the father of Judith Wallace, the writer I referred to in Ogilvies, Wrights, social change. Reporting on a visit by Ogilvie to the school in 1925, The Armidalian commented that a number of boys that year were considering going to Oxford.

The financial impact of the Great Depression on the school and its pupils probably marked the end of the tradition. Then came war. By the 1950s, the tradition had become a memory. Greek was no longer taught, while those TAS boys going to university went to local establishments. Still, the influence lingered, a localised example of the continuing influence of Greece on thought.

No-one lives on Delos now beyond a few staff. The whole island is a world heritage site. Here, as at so many other Greek historical sites, EU money has played an important role in protection and restoration. Greece itself does not have the resources to properly manage its historical heritage without support. 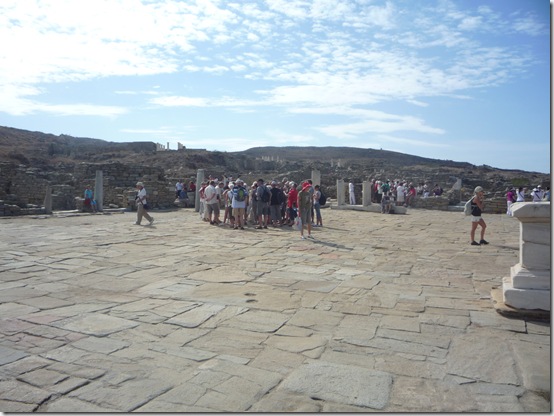 The ferries from Mykonos dock at the small commercial harbour. There is constant jockeying for position. We were there at the end of the tourist season. Even so, there were people everywhere.

Walking up from the wharf to the site entrance, the first impression is the sheer scale of the place. Ruins stretch to the right and left and then up the hill. It is simply hard to get a proper feel.

Guided tours are available, but there are also sign posted walks of various lengths. We chose the second. I am not sure that this was the best option. What I am sure of is that we didn't allow enough time. I also found that I didn't have enough historical knowledge to properly fit things together.

In Ancient Thera I described the overlapping history of that site on Santorini. Delos makes Ancient Thera look like a pussy cat! Millennia overlap in complicated ways. To my mind, the best way of handling this in the first instance is to look at the site as a working settlement, at the town as it was. Then factor in the history.

To illustrate, think of modern Sydney. This is a working city that has its own patterns determined by geography. Then, within this, you have various tourist sites - the Rocks for example - that form part of the city's history. If, and this is the way that the guidebooks and site signs generally work, you looked only at the sites in isolation from each other, then you just get a whole series of historical snapshots that don't really fit together.

Like Ancient Thera, Delos's greatest prosperity began in Hellenic times, the period after the death of Alexander the Great. It reached its greatest prosperity in late Hellenistic and Roman times, when it was declared a free port and became, it is claimed, the financial and trading centre of the Mediterranean. By 100 BC Delos had an estimated population of 30,000, which included foreigners from as far away as Rome, Syria, and Egypt. Each group built its own shrines and seem to have lived in relative harmony.

All this sounds nice, doesn't it? But Delos was also the greatest slave market in the Eastern Mediterranean, perhaps the greatest in the entire Roman Empire. Revenue from the sale of human bodies helped underpin that prosperity. 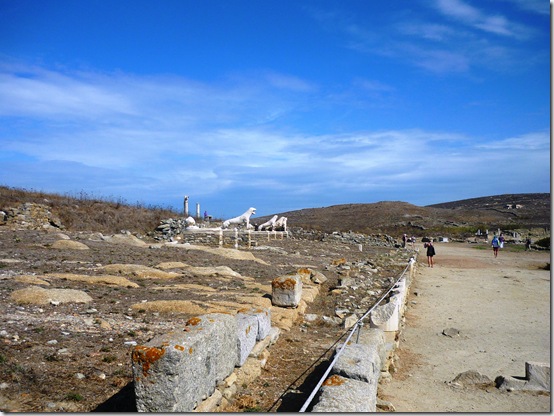 The main built environment dates from this long prosperous period. Within this, there are buildings and public places that date from earlier periods when Delos was a religious and political rather than commercial centre. There, frozen in time, are monuments to now vanished greatness. The photo shows the Lions of Naxos.

Naxos was once a considerable power in a regional context. Then it fell to the Athenians. Ruins here and at the religious centre of Delphi on the mainland are mementos to Naxos's once power.

Like so many other former centres on the Greek islands, Delos's prosperity depended on trade and that depended on peace. In 88 BC Mithridates, the king of Pontus, attacked the unfortified island as part of a revolt against Roman rule. The population now estimated at 20,000 was reportedly killed or sold into slavery, the sanctuary treasures were looted, and the city was razed to the ground.

The Romans partially rebuilt the city, but continous pirate raids made life difficult. In 66 BC the Romans built defensive walls around the city whose ruins remain. However, decline continued. In the 2nd century AD, Pausanius recorded that Delos was inhabited only by the temple guards.

Today's built remains reflect this turbulent history. Yet enough remains to get a feel for what life must have been like.

In writing this post, I haven't quite got to the point I said I would, the conflict between Athens and Sparta and the role of Delos in that conflict.  This will have to wait until my next post.