As kid, I liked the Dr Dolittle books.  One of them featured a caravan. For the life of me I cannot remember the details. I have read the summaries of the books on Wikipedia including the one with caravan in it’s title, but I’m still not sure!

Anyway, following my last post (Train reading – introducing H R Carter’s The Upper Mooki Valley) I was doing some research on horse drawn vehicles when I came across this. Now that’s a Gypsy caravan! Well, actually no, but its certainly my idea of a caravan.

Well, no again. This caravan is designed for a family with five berths including a double bed. I would like a slightly different design.  Still, it does look like fun.

The next shot from the family photo collection is subtitled A Squatter Goes to Town. It shows my grandfather as a young man in what was called, I think, a spyder sulky. And yes, it does look like a racing sulky. If I’m right, this would be the sulky that my grandfather placed my grandmother in after the wedding to take her on the 117 km drive back to Maxwelton, the place he was managing on on a share farm basis near Inverell. 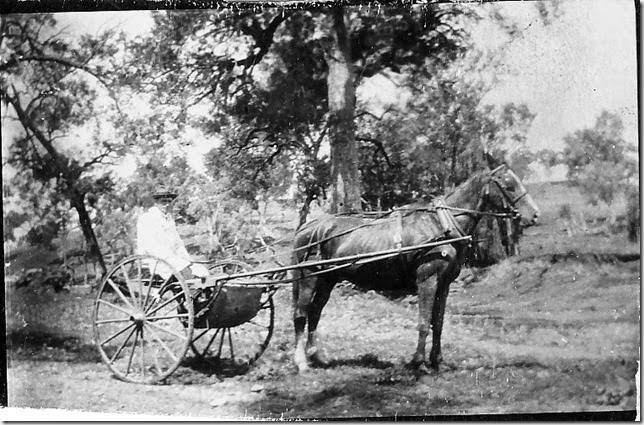 Today we think of horses and horse drawn vehicles as a thing of the past. The motor car has shrunk them to insignificance, Yet you cannot understand history if you do not understand transport, for transport formed life and the way people thought. 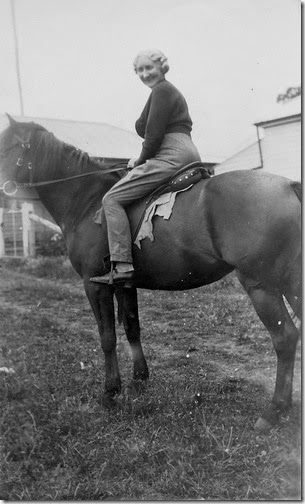 This is a picture of my grandmother on a horse taken at Forglen, my grandfather’s property, many years after the first shot.

While I had country connections, I grew up as a townie/gownie. I have just one shot of me on a horse, perched there with three other children at Forglen.

My grandfather decided to sell the property when I was very young. It would be many years before I got on a horse again. Then the country boys I was with assumed that I could ride. I couldn’t and was plain frightened for no-one told me what to do. It seemed a very long way down.   How did you steer the bloody thing? I was too embarrassed to ask. I feel silly to this day.

I think that we think of horse drawn vehicles as a static thing, an old fashioned thing replaced by the car. Again, it distorts our view of history.

The simple invention of the horse shoe was, in it’s way, as important as the invention of the computer. It was critical to warfare and to transport. It also encouraged the spread of blacksmiths, a group whose metal working skills would be of great importance to the industrial revolution.

I said that we tend to think of horse or other animal drawn transport as static, unchanging. We forget that the technological fervour of the industrial revolution affected every aspect of horse drawn transport, It led to new saddles, new vehicles, new ways of doing things,

Steam power transformed transport on land and sea. Outside the sea lanes or railways, it was animal drawn transport that carried the goods across the land, that supported communication between people. It was improvements there that allowed higher volumes of goods to be carried in shorter time.  We need to remember that.