This morning’s muse looks in a random way at the events of the last week.

Interesting piece by Guy Rundle, The deal with Clive Palmer, in today’s Saturday Paper. As was the case with the New England independents in the previous Australian Parliament, both reporters and commenters struggle when people don’t quite fit in with conventional models.

Paul Barratt has returned to Armidale to live. This is the view from his front steps. It is a five acre block. No town water, but big tanks, a bore and a gray water system.  You can see how dry it is. The New England Tablelands are back in drought. 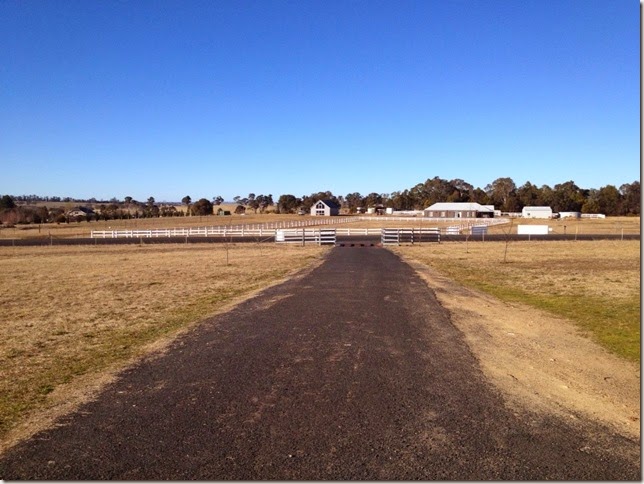 Argentina is now technically in default on its debts. This is a case where my sympathies lie with Argentina. I have no objection to vulture funds buying distressed Government debt and then trying to make a profit out of it. That’s business. However, you cannot expect a Government to simply bow down in the circumstances the Argentine Government found itself in. The national stakes are simply too high. No doubt a compromise will be reached that will give the vulture funds some extra cash, Meantime, 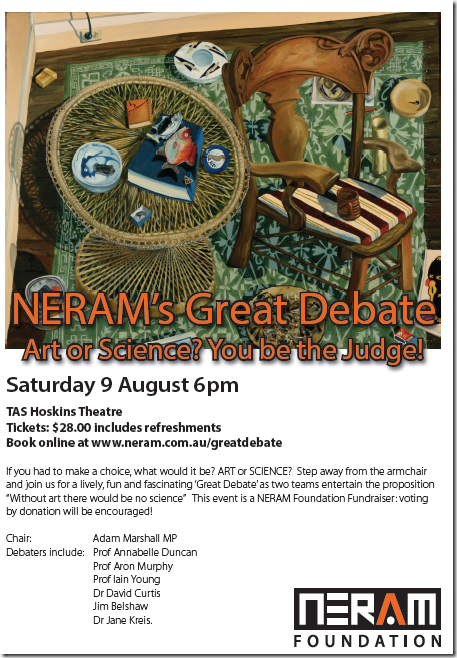 there is a lesson in all this for all countries. Be careful about holding too many assets in the US.

Returning to the local connection, I am off to Armidale next weekend for the Great Debate. This is the promo poster. I am third, rebuttal, speaker on the Art side.

Tomorrow is my target preparation day. As you might expect, I am behind.

Off to Sydney and Melbourne this week. Catching up with some old Qantas mates. What happened to dinner parties that finished at 2am? Now we have lunch and go to venues with no steps.

Now hang off at that old bit and no steps!

I do miss the old dinner parties. It’s not possible anymore. Part of that is overall social change, but part links to laws and the increasingly urbanised and fragmented society we live in.

I am well aware of the arguments for and against the drink driving laws. However, it remains a fact that multiple social activities especially in country Australia simply collapsed after their introduction and rigid enforcement.

I mentioned the proposed changes to the rules for the Newstart Allowance (dole) in An economic & political miscellany. I didn’t think that they were very sensible. Now Job Services Australia general manager Moya Drayton has advised the Senate estimates committee that no modelling was done on the job aspects of the changes, while National’s MP Andrew Broad has slammed the idea that jobseekers should be forced to apply for 40 jobs a month. That element will go because it just doesn’t make sense, but broader problems remain.

Finally, from the media coverage Australians could be forgiven for thinking that the country has swept the Commonwealth games medal count. The reality is a little different. As I write, England has 165 medals (56 gold) compared to Australia’s 132 medals (45 gold).

But wait, it gets worse. The Commonwealth Games are one sporting event where the nations that make up the United Kingdom compete in their own right rather than as a combined team. Are you ready for this? The UK as a whole has 265 medals, 81 gold!

But they didn't win the hockey and they can't win the netball. That would be us, or my father's country, over the ditch :)

Jim, how the mind wanders. I was looking at your flyer for the great debate, and wondered how "Dumaresq" came to be.

Which lead me to the Aus Bios of the brothers William and Henry, whose joint biography notes includes the gem:

A libellous attack in the Australian on 17 March 1827, 'Howe to live by plunder', resulted in a duel between Henry Dumaresq and Robert Wardell. After three shots were fired on each side without effect Wardell's apology was accepted

Which in turn lead to the wonderfully named grandson John Saumarez Dumaresq, who among other things was the first Australian to command our navy but more importantly can be said to have invented an early analogue computer which bears his name.

Enjoyed this ramble almost as much as I did reading your "invented the horse hoof" reference the other day.

Good luck in the debate; suspect you'll need it :)

Too true and just as well, kvd.

I didn't know that John Saumarez Dumaresq was the first Australian born person to command our navy, although I knew about the Dumaresq connection with Northern New South Wale. It's part of the story I am trying to weave.

Glad you enjoyed the horse piece. After all, no hoof no horse!

"...it remains a fact that multiple social activities especially in country Australia simply collapsed after their introduction and rigid enforcement"

Too right, this is PANSW thing, a product of police force over-manning, especially in non-metropolitan areas.

I am not quite sure why we need so any police in country areas. Its a bit sad that court houses and police stations have become some of the biggest buildings, a major growth area. No doubt country people are especially crime prone.

Much easier than fighting real crime in the inner city; also part of the bureaucracy's vision for keeping local economies vibrant - analogous to support for many small town hospitals that should have long been closed because of their inherent clinical risk.