I hadn’t actually thought of wattle seeds as food until I heard this piece. I did know that Australia had become a major supplier of Wagyu beef, although I still struggle with the idea of paying $1,060 per kilo for a 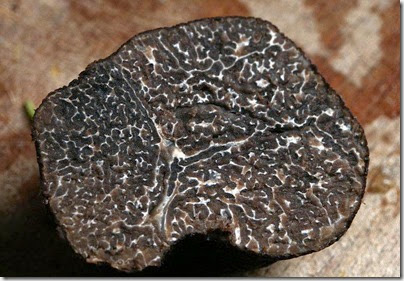 I also knew that after a slow start, Australia seemed to be becoming a major producer of truffles. So one local food that I did not know, two overseas sourced foods that I did.

So for his Monday Forum, have you eaten any of the Australian native foods? Why haven't they become part of the diet of modern Australians?

As always, in responding go in whatever direction you like.

Evan was concerned that there were no non-meat recipes involving Australian native foods. Here are a few:

In a totally different direction, Sue pointed to this piece by Dean Frenkel: The great Australian speech impediment. Are thing as as bad as all this?

If you look at the comments, you will see that kvd was far from impressed with Australian native foods.  However, he did point me to this web site setting describing a number of them.

Interesting piece on Bush Telegraph about the practical difficulties involved in the commercial cultivation of  the Australian  bush tomato.

Well, I can confess a liking for pavlova, and hamburgers with actual beetroot - but I expect these are outside your terms of reference? Never mind; still good. How depressing it is that this continent boasts so few enjoyably edible animal, vegetable and mineral items.

But if today is the 4th of August* perhaps it is worthy of note that the following things 'happened' on this day in Oz:

1860 - The 'Sydney Morning Herald' reports that gold has been found at Lambing Flat, later the scene of Australia's largest anti-Chinese riots.

* I say "if today is the 4th" because of Jim's whimsical sometime publishing of Saturday Musings on Sunday, and his Sunday Essay on Mondays; I'd ask him to consider the effect of this on future historians ;)

On the other hand, if your suggested topic is actual Aussie tucker (and leaving aside that old staple, the Iced Vovo) then you are running foul of my mother's injunction to never eat anything either shot from a helicopter, or scraped of your shoe.

Really not much left after the Vovo, Tim Tams and vegemite - is there?

There is an interesting article in The Canberra Times today by Dean Frenkel.

Here is the opening paragraph:

"Australia has a national speech problem that nobody is talking about. Despite a healthy rise in literacy and numeracy rates over the past century, most people, including the Prime Minister, still have poor speech skills. Yet this not acknowledged as a problem."

It is well worth reading especially when he gives examples of world-class Australian speakers. Sorry I cannot provide a link (too inept).

Oh, and I think the difficulty in sourcing native foods is one reason that they are not used in everyday cooking. I wish I knew more about native foods.

A couple of reasons.
At home we are largely (though not exclusively vego) and the recipes we find to use the bush foods seem largely to be meat accompaniments (like most western stuff).

The restaurants that use bush foods are largely meat based and quite expensive (for us).

Ah, kvd. They go up late, but always on the right date! Thus confusion should be avoided for the historian if not for the reader. Like the dates!

HI Sue. I will bring the link up in the main post. Yes , it can be difficult to find them. Maybe time to do an update on my earlier work.

kvd, you old cynic, you. Evan, I will bring some non-meat recipes up on the main post for you.

So, there are actually some nice native Oz foods. But spare me the claims of 'Japanese Pumpkin Frittata' and 'Blue Cheese Damper' and 'Baked Illawarra Plum Cheesecake'. I suspect Evan would rightly choke on the cheque, never mind the cheese :)

I suspect I would kvd

On the "Illawarra Plum" - from the (quite comprehensive) website following:

Tip: Cook Illawarra plum in a sugar syrup. Soak in liqueur for a minimum of 6 months. Drain and roll in dark chocolate.

- which is little like the old saw about when the brick is soft, throw away the [whatever] and eat the brick.

Anyways, this seems a fairly seriousy sort of source:

Heat 600ml vinegar to just below boiling,then pour over the bush tomato and cap tightly.

Allow to stand for 3 to 4 weeks for the flavour to develop fully.

Strain the vinegar through a damp cheesecloth or coffee filter one or more times until the vinegar is no longer cloudy.

So I rest my case (re the brick)

I am going to have to come back to you on this one, kvd.

Jim, re your 'postscript 2': it is not that I'm unimpressed - way far from it. I just think there's a marked difference between 'our' uses of 'bush tucker' and that of Aboriginals.

Please correct me if I'm wrong here. I admire very much the ability to survive in what, really, is not a very forgiving environment - and I've actually shared witchetty grubs with young mates long ago (tastes like nutty sh*t, just as they said) - but to suggest the examples I gave are indicative of 'native food' simply reinforces, in my mind, Chaucer's "Thanne is it wysdom, as it thynketh me, To maken vertu of necessitee"

Respect I have for 60,000 years of survival on a harsh continent; but not so much for Cook Illawarra plum in a sugar syrup. Soak in liqueur for a minimum of 6 months. Drain and roll in dark chocolate.

Still, if it pleases the masses, and turns a dollar, and Evan can afford "Bush Tomato Infused Vinegar" then who am I to complain?

What I wonder is (help me here - all you 52 silent 'followers' of Jim) does anyone think that "Japanese pumpkin frittata served with bush tomato chutney" is an indicative "Australian native food"?

Jim, you're going to lose that debate so bad it will probably hurt :)

Oh ye of little faith, kvd. But you have reminded me of the need to do some preparation.

I,d like to taste piece of beef for $1,060 per kilo. Article written about such delicious product made me hungry.