Saturday morning I was due to fly out to Armidale at 8:30 for the NERAM Great Debate. I had made arrangements to meet  fellow debater David Curtis at the airport for an initial review.

In an earlier post (Sunday Essay – NSW GPS rugby: when excellence destroys) I talked about the problems at the top of the NSW GPS competition. The thirds competition is very even, involves all nine schools and some very good Rugby. I really, really, wanted to see some of the games.

In the way of the world, there was fog at Sydney airport. Our plane was coming from Dubbo, could not land in Sydney and then had to go to Canberra to refuel. We waited and waited. There was only so much that David and I could do. In the end, I just dozed. 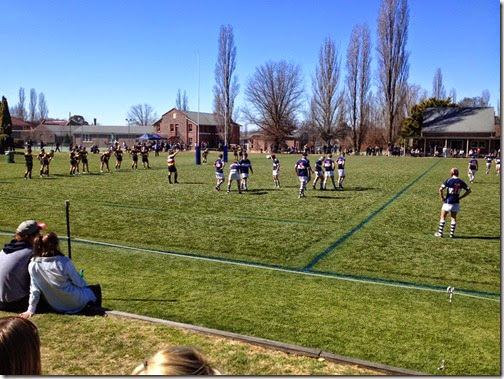 lear that I would not get  to Armidale in time for any of the matches. It would be that evening before I found out the results. I quote from a description of the game:

TAS won 32-22 in a very exciting game.  TAS started very strongly through the forwards with Pierce Hayden a standout performance including 2 tries. The backs were great in defence and made the most of opportunities in attack. TAS lost 3 players to yellow cards in the second half due to repeated infringements but held on.

Three yellow cards, each one involving time in the sin-bin. TAS really must have defended ferociously in the second half to survive that. The photo of the game is from Paul Barratt. TAS is on the right.

Turning now to to the main purpose of the trip, I fear that kvd was right, the art side did lose the Great Debate!

This is a shot of the teams. Adam Marshall MP as the adjudicator.

On the left from the left, myself third speaker, to my right Dr Jane K The debate was held at the TAS Hoskins Centre. This really is a fabulous venue that the School makes available for local events.

I am not sure just how many attended the debate, something over one hundred. It began with champagne and rather nice nibbles, then the debate, followed by drinks and further nibbles.

This was a funding raising even for the NERAM Foundation, so in addition to the ticket price, donation boxes marked art and science were circulated to encourage people to vote by donation. I’m not sure how much was raised in the end, something over $8,000 I think. The money goes to a permanent fund, with only the interest paid to the New England Regional Art Museum. 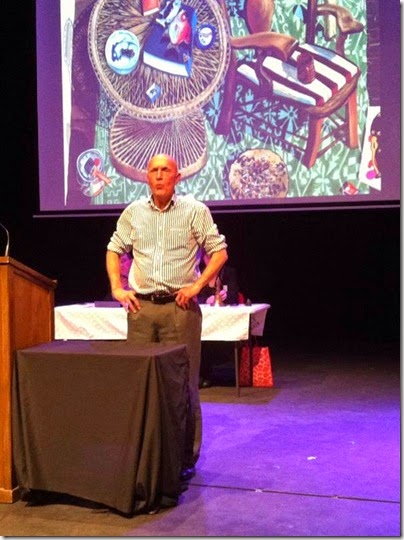 This is another shot from the debate. I had just been paper planed. Audience interaction was encouraged!

It was an interesting experience. I think that we on the Art side stuck a little too closely to debating rules. This was, after all, a Great Debate  in which just about anything goes.

Professor Ian Young, the third speaker  on the Science side, drifted somewhat from the rules (!), but he was very funny indeed. And that’s the point when you want people to pay.

It had been quite some time since I debated, I did quite a bit of it as an undergraduate in Oxford Union style debates, something I really enjoyed. My side was impressed that I spoke without notes or indeed mike, but it’s just technique, something that I need to brush up if I’m going to do this again.

I don’t know about you, but as I grow older I count my successes less and less by whatever career successes I may have had, more and more by things like the debate or the book, things that mark a contribution now.

I am about three quarters of the way through the book. I imagine I will write something on it in due course.

I had an "oh no!" moment just a little while ago reading of the death of Robin Williams. He was such a joy to watch, in a wide range of roles. He is said to have fought depression, something which I have also, and continuing, experienced. He's the sort of valuable human for whom I really do hope there is 'somewhere better' to go - although I have long since left my hopes for that packed away.

Sorry to rabbit on; his face always was to me the epitome of the clown mask, on which for some reason, they always paint tears. I might distract myself by trying to find out just where and how that traditional depiction came to be.

I am just too competitive for my own good, kvd. Robin William's death rocked everybody including my daughters. He was part of their childhood.

I didn't know that you suffered from depression. Its happened to me from time to time and its quite difficult. Laugh and the whole world laughs with you, cry and you cry alone.

I look forward to finding out about clown masks! :)