This post is a signpost, a post intended for later use. It’s creation was triggered by my reading of Emily Hahn’s Raffles of Singapore with its detailed descriptions of aspects of the operations of the British East India Company.

I had obviously been aware of the operations of the various trading companies such as the English later British East India Company (established 1600), the Dutch East India Company (1602) or the Hudson’s Bay Company (1670). There has always been a degree of romance and a sense of adventure associated with such companies,  one captured rather nicely by the original title of 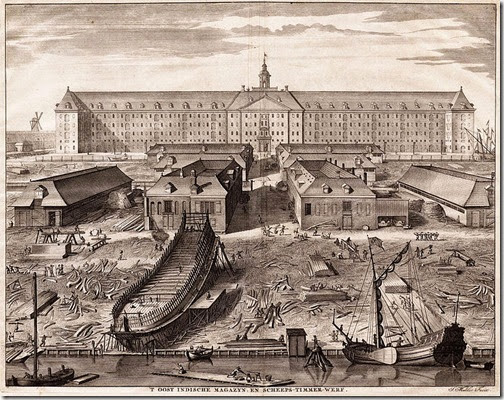 the Hudson’s Bay Company: The Governor and Company of Adventurers of England trading into Hudson's Bay. How could one not be attracted by a title like that?

While I was aware of the companies, I don’t think that I was properly aware of just how early they began, how big some of them were, nor of the critical role they played in gathering capital, organising trade and laying the basis for the outward expansion of Western Europe.

The illustration shows the shipyards of the Dutch East India Company in 1726.

To get a feel for what I mean, and assuming that you have some spare time (do any of us today?!), this Wikipedia page lists some of the trading companies.

Take an hour some time and just click through on the links. You will quickly get a feel for just what I’m talking about.