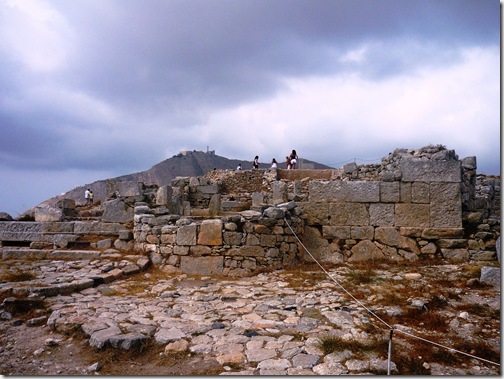 Just another shot of the ruins of Ancient Thera. As you can see they were quite something.

The day following our visit to Ancient Thera began hot and bright.

Over breakfast, I kept on hearing this distant noise. Finally, I got up and wandered off to investigate.

I had forgotten that the AFL grand final was on, even though I had seen the signs the night before. Now I found myself in a taverna full of Australians and their somewhat bemused friends watching the last moments of a live broadcast.

There were in fact two tavernas in different parts of Fira broadcasting it live from 6.30 am. This was the first grand final, the one that ended in a draw, and it was indeed very exciting.

The group split up this day. Three decided to return to Kamari to go swimming, another wanted to go sightseeing. I didn't want to do either.

This is the beach at Kamari 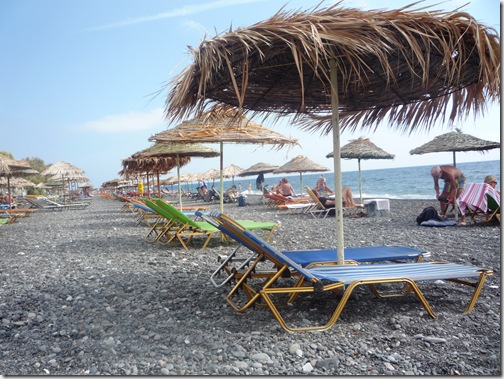 I really didn't want to go sightseeing either.  Not only was I sightseen out, but I had also developed a bad cold and was feeling a bit miserable and sorry for myself.

I decided instead just to do a few domestic things, check my rapidly diminishing money, check emails and even do a little bit of blogging.

I found a quite good internet cafe nearby, did what I had to, had a small picnic style lunch and a beer, and then a nap. By the time everyone gathered in the evening for a drink on a terrace and then dinner, I was feeling much better.