The morning after the dinner I described in Last night in Rethymno - Myrogdies we were up very early for we had to dive to Iraklion to catch the ferry. We left our friendly Hotel Leo and our little alley way and dragged our bags back to the car. It was very early.

I was  a little sad to leave Rethymno and Crete, but we were heading to the Cyclades and into the jaws of the tiger.

In some ways, human occupation of the Greek Islands is a bit like a Greek tragedy. Generations live in peace, but always with the knowledge  that human or natural disaster may happen at any time. It's like living in the jaws of a tiger, jaws that may close at any time.

In our case, we were going to the jaws that may have closed on the Minoan civilisation, bringing it to an end.

You can see from the map of the Aegean that the Cyclades lie north of Crete.

All Greek islands have long and complicated histories. The Cyclades are no exception. If anything, their history is especially complicated because their strategic location in the Aegean gave them wealth, but also made them vulnerable to attack. As a matter of idle curiosity, I tried to count up the various entities that had ruled the Cyclades in whole or part at one time or another, but gave up when I reached twenty.

I was now getting to understand something that had always puzzled me a little in an Australian context, the reason why those from various Greek islands identified so strongly with their island. Certainly they were Greek, but they were island first. "Don't say too much about the Kythirans,"  I was warned in the context of a piece I had written a year back, "they think that they own the world!"

Each Greek island has its own history. The chain migration that took place in the twentieth century and that almost depopulated many of the islands, concentrated people from each island in particular places in particular countries. There they clung to their identity, mixing with others from their island and indeed from their village, as a way of providing security in a new world. Ties of locality and family bound them together.

As they established themselves in their new lands, they sent money back. Old family homes were rebuilt, with people returning for holidays or even to live. In many ways, the re-birth of the Greek Islands was funded by money from Australia or Canada or the US. The nature of chain migration means that individual islands are closely identified with particular external countries.

Right at the end of the trip on the flight from Athens to Dubai, I sat beside an Australian woman married to a Kythiran. "We come back every year," she said. "This year my niece was getting married and wanted to be married on Kythira. We had seventeen people from Australia staying at our house."

We chatted about the Greeks in Australia and about the cafes and businesses they had owned in Canberra, Armidale and Sydney. As I mentioned particular names, she told me where they were from, how indeed the names had evolved. I was too drained to take notes, something that I now regret, for it was a real education. 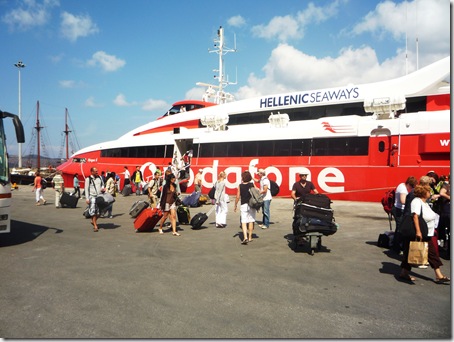 Our first task on arriving in Iraklion was just to find the ferry, a super cat. This was actually harder than it seemed. Inter-island ferries are a big business, and there were dozens of ferries in port.

"You can't miss it," we were told. "It's red and has a big vodafone ad". We kept walking, and indeed there it was.

We found our comfortable aircraft style seats upstairs in the business class section. We had decided to pay the extra because of the crowds. We were at the end of the tourist season, but there were still lots of people. This proved to be a wise decision.

Dumping my bags, I went back down to the back of the boat for a last look at Iraklion and Crete.  As always, the passing parade kept me entertained. I sympathised with the increasingly desperate man waiting for the rest of his party. I had a strong feeling that there had been a party the previous night, and people had slept in. Finally, he left the boat.

The jet cats are driven by tw 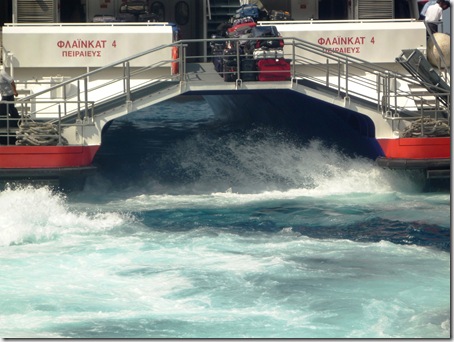 o powerful jet engines, one on each side at the back of the boat.

I looked for a shot to give you a feeling for the power involved This one may give you something of a feel.

With such engines, the jet cats are fast. They are also  normally quite smooth.

Not so today. There was a real chop on the water. Instead of gliding, the boat went bump, pause, bump. There was also a distinct sideways movement.

The first person threw up within minutes of leaving the harbour. Seasickness is clearly contagious. Within half an hour, people were throwing up everywhere. Part of the problem was that the boat was sealed in a sense, with no access to the outside and to fresh air.

I wondered about myself, but the motion was no worse than rides I had experienced elsewhere. I also found that when I got up - something that I had to do a fair bit to take the barf bags down to the disposal unit because one of our party was sick - the motion eased.

Quite unfairly, I started to enjoy myself. It was actually fun balancing against the pitch and roll, reeling from seat to seat on my regular visits to the disposal unit. To add insult to injury, I bought a beer and a snack, and settled down to enjoy the experience! 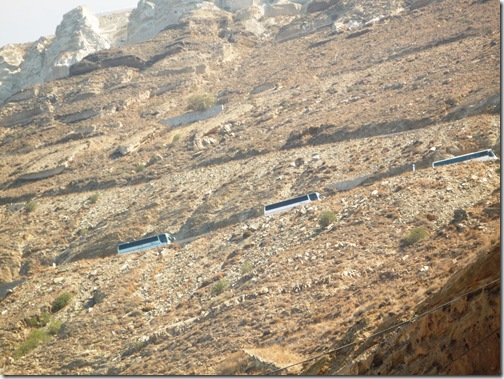 It was hot and dry when we decamped in Santorini at Athinos, the Island's main port.

We didn't rush to catch the bus to Fira, the little capital where we were staying. Instead, everybody just wanted to sit down on solid ground and have a drink.

While we waited, I watched the buses crawl up the side of the caldera (Santorini is a volcanic island) from Athinos to Fira.

Santorini is one of Greece's premier tourist destinations. My wife and mother-in-law had already been there, as had eldest, now studying at home in Australia. Clare and I had not.

I actually started with a prejudice against the place. I like pretty views, but the rave reviews from the family seemed to me to be too touristy, too enthusiastic. I generally like what I see as meatier stuff! I was to change my mind, but I am still not convinced about the sunsets, one of the standard tourist raves about Santorini.

Finally everybody was settled, so we caught the bus for Fira. 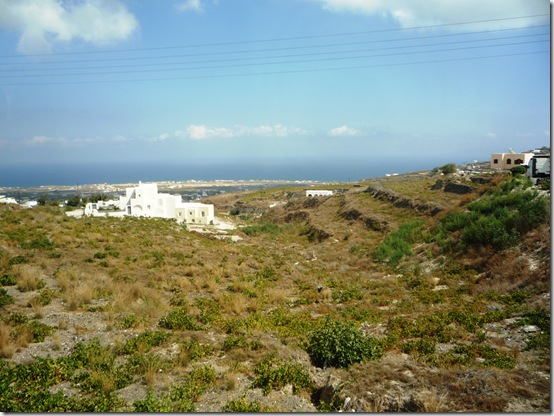 My first impression on reaching the top was not positive.

To my Australian eyes this was dry, even semi-arid country, with few trees to break the monotony. The generally white soils looked poor, lacking in humus, while the scattered white houses baked in the sun.

Santorini does, in fact, have a semi-desert climate. With an increased population especially in the tourist season, it relies on a desalination plant. The resulting water is not suitable for drinking, but is critical in meeting needs for washing and sewerage.

As we travelled, I kept seeing what I thought were grape vines sitting on bare ground without any fencing, but  the shapes were strange. In fact, Santorini's grape vines, the Island's wine is well known, do not run in neat rows such as those we are used to in, say, the Hunter. Rather, each vine is trained to grow in a circle, huddling to the ground. The green bushes at the front of the photo are grape vines.

It was really on Santorini that I came to realise the importance of water to Greek history, something not mentioned at any time when I was studying the subject. I had known this in a sense, but not really recognised it.

Many of the Greek Islands have no or limited permanent water. Human settlement depended on the collection and storage of rain water, placing an upper limit on population. Australians are used to droughts. I wondered what happened here when the rains failed. I don't think I have ever seen a discussion on drought in Greek history. 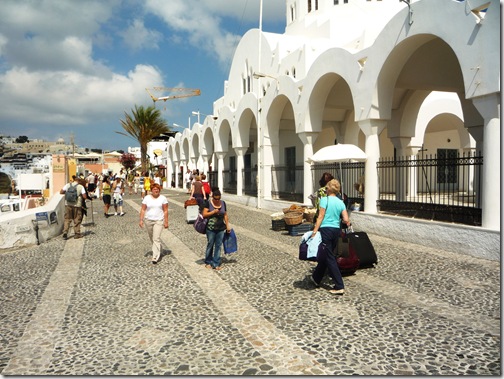 Finally, we arrived in Fira and followed the usual process, dragging our bags along the cobble stones towards our hotel.

I think that heavy bags are a girl thing. It's not just that women have more clobber, but they also shop more. I could barely lift some of the bags.

To my mind, the simple invention of wheels to go on bags is central to modern tourism. Without it, places lacking door to door transport would become unreachable!

We arrived at our hotel, dropped the bags with a sense of relief, and went out to find a late lunch. The Santorini leg of our adventure had begun.