Knossos and the Minoans

I fear that not everyone shares my current obsession with things Greek. I quote my cousin: "I do wish you would get over Greece as I am finding it all rather tiring!" Jamie, I promise to speed things up!

My last post in this series, The remarkable story of Arthur Evans, told the story of the discovery of the Minoan ruins at Knossos. Two things were critical to intense human settlement on the Greek Islands, agriculture and sea transport.

It was the Australian prehistorian Gordon Childe who coined the phrase "Neolithic Revolution" to describe the transformation in human life that occurred following the domestication of animals and the development of farming. Starting around 10,000 years ago, this revolution progressively replaced hunter-gatherer societies with larger farming communities.

There is a bit of a myth that this revolution automatically increased standards of living. We actually know from the Australian Aborigines that hunter gatherer societies could have a more varied diet achieved in less hours work than their farming equivalents. What it did do was to create a food surplus that allowed for greater populations and for people to work full time in activities other than food gathering or growing. The town had arrived.

Sea transport facilitated the growth of human settlement on the Greek Islands because it allowed not just food but other products to be distributed as well . Humans from all ages have attached value to particular artifacts for religious or ceremonial reasons, for practical use, for decoration. The agricultural surplus allowed full time artisans whose products could then b 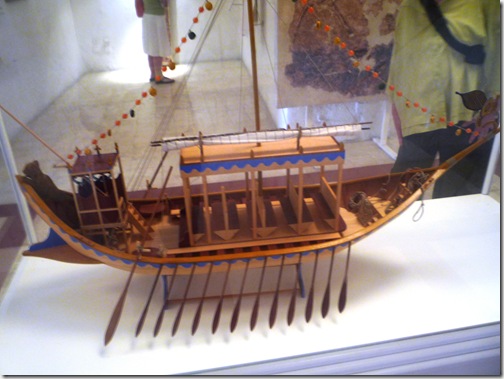 e shipped. The merchant had arrived, to be followed by the banker.

The photo from Santorini shows a model of a Minoan ship. To our eyes it may not look especially sea worthy, but those ships carried goods right across the Eastern Mediterranean.

Agricultural surpluses plus larger populations also allowed the creation of organised military forces that could be kept in the field for longer times, while providing increased incentives for warfare. Power rested on control of the agricultural surplus and of livestock, while the presence of artifacts with a market value provided ample incentive for individual or group endeavour. Both organised warfare and piracy had arrived.

The first has been called the Cycladic centred on and named after the group of islands now bearing that name. The islands form a natural circle around Delos. Their closeness to each other and to the Greek and Turkish mainland's gave them a natural trading advantage.  Their stone and especially obsidian resources provided an export valuable when stone tools were still critical, a resource later valuable for building. The earliest Cycladic civilisations date fr 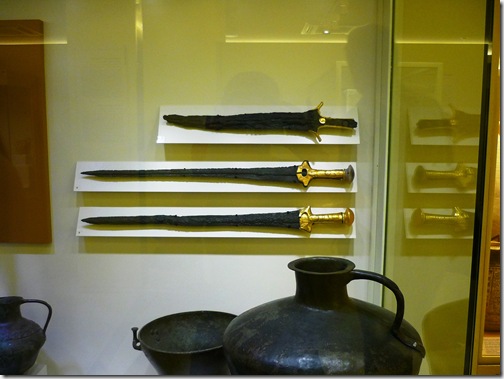 The Minoans were the second civilisation. While farming appeared on Crete around 7,000 years BC, what is now called the Minoan Civilisation first arose around later 3,650 BC. From around 2,700 BC, bronze first appeared on Crete following the invention of smelting and came to be used for weapons and implements. The  photo from Clare shows some of the bronze artifacts recovered from Knossos.

Thinking of Jamie, I suspect that all this sounds excruciatingly dull, yet its quite important.

The sea giveth and the sea taketh away. The Cyclades' strategic position gave them wealth and sometimes power from 3,000 BC to the twentieth century, yet made them vulnerable to invasion. They often became pawns in other people's strategic games, as well as victims to the piracy that infested the Eastern Mediterranean.  In this case, they fell within the growing orbit of Minoan influence.

The Minoans were seriously wealthy. This wealth allowed them to build towns, palaces and administrative centres on Crete and elsewhere.

The Palace at Knossos sits on the top of several hills. 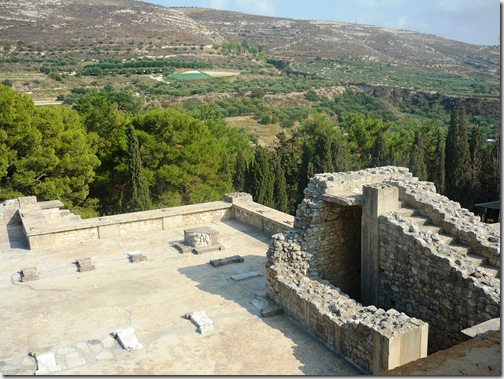 This provided a degree of protection, while giving access to the resources of the surrounding countryside. This photo from Clare will give you a feel. Part of the reason for Minoan wealth and power lay in the combination of access to both a relatively large land area and the sea.

The site is large, over five acres, occupied by some thousand rooms, corridors, walk ways, workshops, open areas and storage areas. The labyrinthine nature of the complex  gave rise to Evan's name for the whole civilisation because it reminded him of King Minos's fabled labyrinth.

While Arthur Evans called it a palace, it was more than this; a religious centre, residences and administrative centre. In the centre was a paved Central Court perhaps 25x50 metres square linking the wings.  From the Palace a narrow road stretched down to the sea flanked by merchants' and other residences.

To modern eyes, many of the rooms and walkways here and on other ancient sites are small and must have been very dark in buildings that could reach three stories. Toilet, water collection and drainage systems were built in. Population sizes can be difficult to estimate. However, one population estimate based on nearby cemeteries suggested that the city had a population of around 100,000 at its peak. That's a seriously big 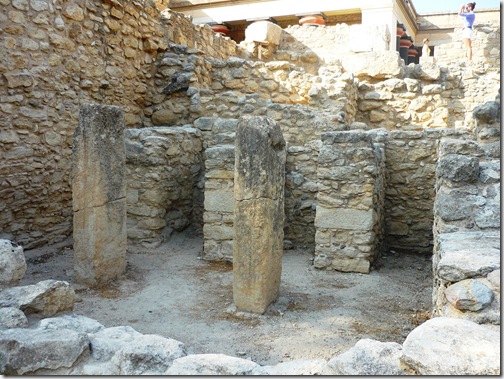 The scale of the Palace itself is actually difficult to comprehend, not just because of its size but its sheer complexity. I found myself constantly comparing view with map just trying to work out where I was. Perspectives keep shifting as you walk around.

If you have time, I suggest that you start with a walk around the outer perimeter of the place just to get yourself oriented to some degree. While we chose not to do this, a guided tour can help.

I mentioned in my previous post that some aspects of Sir Arthur Evans' work on the site had been seriously criticised. Essentially, he re-built parts of the site to show what it might have looked at when alive. Knossos today is actually a meld of original ruins with Evan's reconstructions. Further, and as happened in other parts of Greece during the Second World War and Post War period when funds were very tight, both original ruins and reconstructions suffered significant damage. Greece's 1979 accession to the European Union brought access to EU funds that has played a major role in the preservation and restoration of aspects of Greece's past. 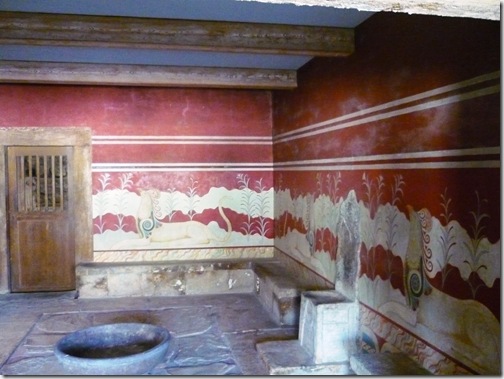 Whatever the arguments for and against, whatever the degree of difficulty for the visitor in knowing what is original, what reconstruction, I cannot begrudge Sir Arthur Evan's decisions.

This photo from Clare shows one aspect of the Palace. Original? I'm not sure.

Without Evans, we would know far less about Knossos and the Minoans. Without Evans, the site may well have been robbed or damaged.

Beyond this, Evans' reconstructions give a feel for the site as it might have been.

With a site of this size, it took quite a while to gather the whole party together. As we waited, we drank freshly squeezed orange juice and wrote postcards. To Australian eyes conditioned by our supermarkets, Cretan oranges look small and blemished. They sure are sweet. 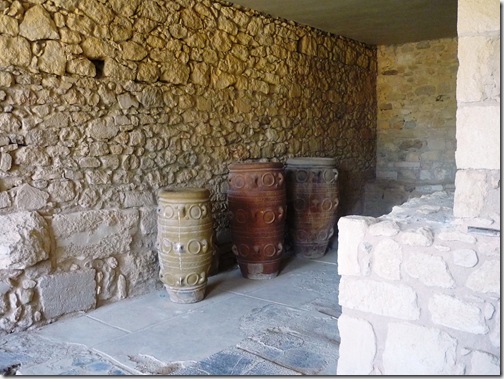 Party finally gathered, we drove back to Rethymno through the late afternoon sun, well satisfied with our day in Iraklion in general, our visit to Knossos in particular.

I will leave you with a final Knossos photo from Clare.

One of the things that struck me here and in other parts of Greece was the sheer size of the pottery jars used for storage. I was going to say amphora, but that is just one type.

If you look at these ones here and think of them filled with, say, olive oil, you can imagine just how hard they would be to move around.