The Australian prehistorian Vere Gordon Childe (1892-1957) was a remarkable man.

After graduating from Sydney University in 1914, he went to Queens College Oxford where he acquired an interest in European prehistory and Hegelian and Marxist philosophy which transformed into his commitment to socialism.

In 1918, Gordon Childe returned to Australia to take up a position as Senior Resident Tutor at Sydney University's St Andrew's College. He was fired after addressing a pacifist rally, and was then denied an academic position at Sydney. He became private secretary to the NSW Labor Parliamentarian John Story, staying with Story when he became premier. Childe's 1923 book How Labor Governs, one of the first books of its type, reflected his experiences with Story.

After Story's death in 1921, Childe returned to Europe where he became Abercombry Professor of Archaeology at Edinburgh University in 1927, a post he was to hold until 1946. Childe was energetic and multi-talented; he had the capacity to synthesize and wrote with great clarity, making his work accessible to a wide audience.

Flowing from his Marxist views, Childe attacked the idea of environmental determinism, arguing instead that technology helped form society. He also argued for a world view of prehistory. In doing so, he invented terms like the Neolithic and Urban Revolutions, and transformed the term Bronze Age from a dating point to a description of a social and technological phase. His influence was profound, and continues today.

Gordon Childe may seem a long way removed from the last post on the story of our Greek trip,  On the road to Iraklion, but a key reason for our day trip to Iraklion was to visit the Bronze Age Minoan ruins at nearby Knossos.

Iraklion (population about 137,000) is Crete's capital and the fifth largest city in Greece. In an earlier post, I talked a little about the complicated history of Crete.

The first city at what is now Iraklion was founded by Saracen invaders who in 824 AD had captured Crete from the Byzantine or Eastern Roman Empire. Under their rule, Crete became a nest of pirates, a constant threat to Byzantine shipping and settlements. In 961, the Byzantines finally regained control, killed the inhabitants and burnt the city to the ground. They built their own city. This fell under Venetian control in 1204. 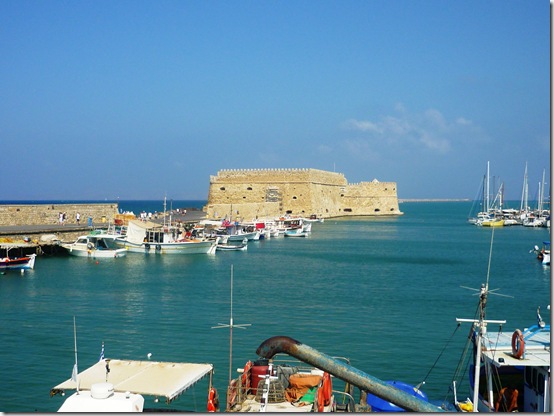 Like Rethymno, old Iraklion is visually Venetian, including its walls and forts.

Under Venetian control, the Byzantine inhabitants and Venetian arrivals melded to some degree, creating a centre of art and culture as well as commerce.

Like Rethymno, Iraklion fell to the Ottomans despite all its walls, although it took a twenty-four year siege to do it. According to Wikepedia,  70,000 Turks, 38,000 Cretans and slaves and 29,088 of the city's Christian defenders died in the last twenty-two months of the siege.

I don't know about those numbers, 29,088 is very precise, but it does give you a feel for the scale. As I said earlier, Greek history is a bloody one. The number of casualties is large by today's standards, larger still when you consider the smaller human population of that past time.

We really found our way to the old city almost by luck, just following the port signs. Once there, we found ourselves somewhat lost while we drove round looking for parking. Finally, we found parking at the port itself. We had no idea whether this was a good or bad location because we had no real feel for the geography. It proved to be a good location.

Guide books in hand, we strode off into the unknown. You can, of course, always tell we tourists by the way we carry our guide books. They are the indispensable bible of modern travel.

Mass tourism with its multiplicity of guide books is relatively recent, part of our social history. However, I was startled to discover that the first guide books apparently date to the mediaeval Arab world and were designed to assist treasure hunter 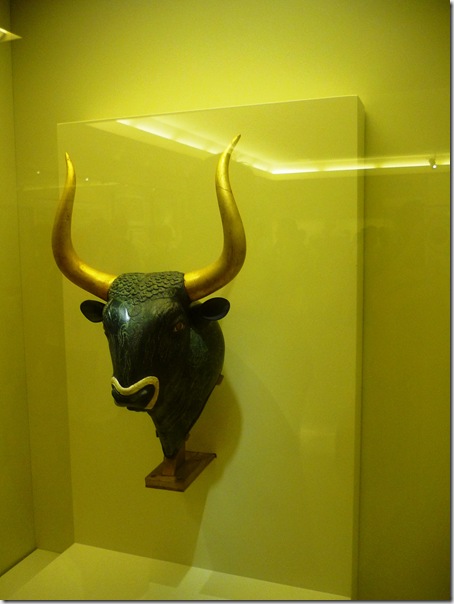 s. Substitute shopping for treasure, and not much has changed!

Our first port of call, the National Archaeological Museum, contains a wide range of Minoan artifacts. Unfortunately, much of the museum was shut for renovations, with only one wing open. Still, there was enough on display to give us a taste.

I want to talk in more detail about the Minoan period in a later post. Still, this photo by Clare will give you a feel for the visual beauty of some of the material.

One of the things about visiting museums or ancient sites in an unguided gang, I was going to say group but gang is probably more accurate, is the way everybody does their own thing. Here we fell into a pattern.

Clare, young and fit, would stride off carrying her camera with the aim of seeing as much as possible. On some sites such as Delos, she managed to complete the longest tours while the rest of us were still only part way through a much shorter route. At the other end of the spectrum, our friend Louise liked to wander and ponder, taking her time.

The rest of us fell somewhere in between depending on our interests. All this meant a big spread  in the time taken. In the end, the best way of handling this was just to go with the flow, setting hard times and meeting points when required.

From the Archaeological Museum, Clare and I visited the nearby Battle of Crete Museum, while the rest of the party adjourned for lunch. This museum was on my must-see list because of the Australian and New Zealand involvement in the battle.

The story of the Battle is well covered in the Wikipedia article. Just as it had been for the Byzantines, Venetians and Ottomans before, Crete was strategically significant. Allied control of the Island provided a base for strikes into occupied Europe.

Initially, the German army was reluctant to invade because it might interfere with preparations for the German invasion of the USSR. By contrast, the German Air Force saw it as a chance to to test their airborne capabilities, to recover pride.  On 25 April 1941, Hitler signed Directive Number 28, ordering the invasion of Crete. The battle that followed was distinctive for three reasons: it was the first major airborne invasion; the first in which intelligence was used fro 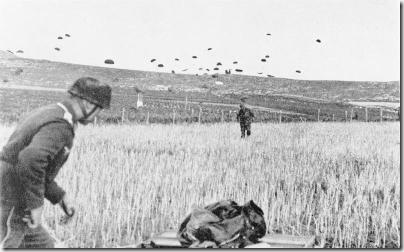 m the broken German Enigma code; and the first in which the Germans faced a mass civil uprising.

The battle began at 8am on 20 May 1941 when German paratroopers landed near Maleme airfield and Hania.

This was a battle that the Germans were, I think, very lucky to win. In the end they did, largely because of air superiority.  Commonwealth forces lost 17,773 men killed, wounded and captured. Total Greek casualties including civilian deaths are unclear. What is clear is that the Germans responded savagely against the civilian resistance. The photo shows civilians executed during the fighting. More were to die in the 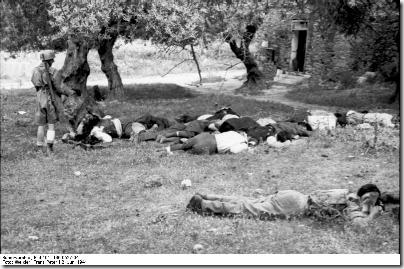 Iraklio itself was heavily bombed during the fighting, doing great damage to the historic centre.

Before going on, you have to watch the history on Wikipedia and in the guide books for bias. Often, this appears in tone, rather than facts.

The Australian written Lonely Planet guide objectively reports on all sorts of catastrophes and massacres. Yet when it comes to its description of the British Ionian Islands Protectorate, it couldn't resist a sneer at the British: "the all-powerful British couldn't resist meddling"; "British rule was oppressive, but on a more positive note...".

I had never heard of the British Ionian Islands Protectorate, nor were we visiting those islands. Still, I did look it up just to check. Considering the sweep and complexity of the history of the Greek Islands, I was left wondering just what the British had done to deserve this Australian sneer.

This case is a small example of a much bigger problem, the way in which the complex history of the region affects the writing of history itself. History is alive in the present, affecting life and attitudes. Bias is always there. The Battle of Crete Museum is a local museum, with the majority of descriptions in Greek. This made it hard to get full value. However, even at this level of understanding, it was fascinating.

Unfortunately I had run out of camera battery, so was not able to get photos. However, the exhibits include a mix of military kit, photos and documents; Greek documents, English documents, German documents. It drew out the heroism and savagery of the invasion and resistance that followed.

Earlier, I spoke of the bonds between Australia and Crete. The photo is of the Hellenic Australian war memorial in Rethymno.

The Battle of Crete Museum is full of links to Australia and New Zealand. Of course, we are only a small part of a story concerned with Crete and the Cretans. However, it is important to them and to our own collective history.

If I had a single wish from my trip, it would be that the local authorities in Iraklion would add English translations.

It's not a big museum, just a few rooms, but its focus and small scale captures a slice of shared history in a powerful if sad way.

You seems so love in any kinds of history Jim..
The Battle of Crete Museum looks interesting, as it is also provide full of links of Australia and NZ.

Good morning, Niar. I do indeed love history; I like seeing how the bits fit together.I see Merapi has erupted again. That's another thing I want to write about re Greece. Volcanoes.

I agree with Niar. I am always caught up in the infectious enthusiasm displayed here. Jim you would make a fine educator I think.

Also, I'm interested to know if these photos are from a simple point and shoot digital? There is a quality of detail which adds greatly to the journey.

Anyway, it is the absence of sarcasm, or pontification from above, which keeps me coming back - no matter what the particular subject. Thanks.

Thanks, KVD. The current photos are click and point digital. I am still learning how to use the camera properly.

Your historical writing often give me some new knowledge, it's lucky there's a person like you who aware of histories.
I think in my country the awareness of historical knowledge is seems slightly reduce in some aspect, like in school curriculum, the historical lesson is not as complete as I was. Some students event lack of knowledge of their past nations story.

I waiting for your new post regarding volcanoes =)
Yes, it's painful to see the victims and the suffer of society around mountain.

Interesting, Niar, if awareness of history is down in Indonesia too. I wonder if it is a global trend? Vocanoes will follow next week.