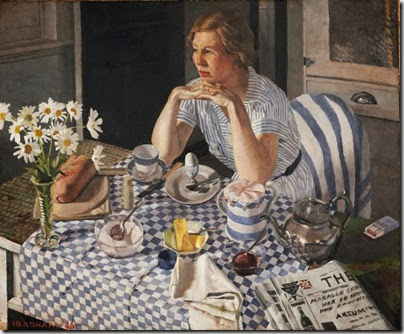 Another open forum  for people  just to chat if they want on whatever they want. A few questions to start,

This painting is a breakfast piece by Australian painter Herbert Badham. It features the painter’s wife.

I have spoken of Badham before. I wondered what your favourite art was? Why does it appeal? How do we use or interpret art?

The Indonesian elections take place this Wednesday. Early Australian voting took place this weekend. This is the Lowy Institute blog take on the elections.

I wondered what your take was on the elections. There has been more coverage this time in the Australian media, with ABC 24 running an election special Wednesday night.

AC has been visiting in Florence - I lived in a palazzo ! What’s your favourite European city? Why is there such a love affair with Europe at the present time, especially among the young?

Couldn't help thinking of LE's quite eloquent comment a couple of posts ago - and I don't find it in any way emasculating to say that I think the article is worth a read.

For mine, I somehow felt 'my future' was more reliable, secure, in my daughter's endeavours. And it has proven so. (I think there is a valid reason why young males are often referred to as 'dickheads')

First of all, kvd, this is indeed an open post!

We are all influenced by our immediate environment. I have rarely seen the behaviour talked about in that article outside certain very macho environments such as sales or some IT areas, although I know that it happens.

It would be interesting to hear from women who have experienced such behaviour to know the social context.

That was a serious question of mine. I grew up in a slightly un 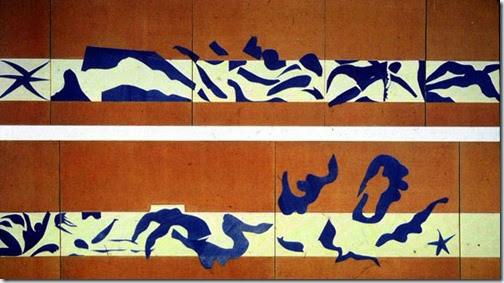 usual world, then went particular paths that did not give me a lot of exposure to this type of thing. I suspect that LE could give me examples from law. So just to educate me, what are the exact environments in which this type of thing was experienced?

Evan loves Matisse’s swimming pool. What do you think?

On Badham. Michael O’Rourke introduced us to James Mcauley’s At Rushy Lagoon because Badham was “a world of sense and use” Like the poem!

Watching television may be an effective spermicide:

Serious point though: see the Brazil stats quoted in the article - something is going on?

Couldn't help thinking of LE's quite eloquent comment a couple of posts ago - and I don't find it in any way emasculating to say that I think the article is worth a read.

For mine, I somehow felt 'my future' was more reliable, secure, in my daughter's endeavours. And it has proven so. (I think there is a valid reason why young males are often referred to as 'dickheads')

Response one: First of all, kvd, this is indeed an open post!

We are all influenced by our immediate environment. I have rarely seen the behaviour talked about in that article outside certain very macho environments such as sales or some IT areas, although I know that it happens.

It would be interesting to hear from women who have experienced such behaviour to know the social context.

On the Indian/Brazil case, I don't think that this pattern is unusual. Not sure about the TV impact, though!

On IT I agree Jim, but also lawyers come to mind from personal observation. Long gone from online I expect treatment regard accorded to a female representing barrister during the enquiry into the Sea King helo crash on Nias was quite blatant. All 4000 pages of it, by both bench and bar, it seemed to me.

I think there are different expectations about how women and men should behave at meetings as elsewhere in life. Vive la difference!

I suppose I am just being provocative, but I think it is about making allowing women and men to make an effective contribution. A man who talks over women is just being rude and should be put in his place by a good chairman. Similarly, a woman who behaves like haradin deserves to be treated as such. (Unfortunately, I can't remember the the meaning of haradin, but I don't think that affects my argument.)

Miro speaks to me in ways no one else does.
Of them all some of Matisse is probably my all time favourite (especially the swimming pool, what a work!).

I'm wondering what implications there are for us being in breach of a UN convention by sending asylum back to where they are fleeing (if any). I'm almost entirely ignorant of international law.

I have added Matisse's swimming pool to the main post, Evan. Why is it your favorite? Have I got the piece right?

On the international law issue, not a lot I fear.

Don't misunderstand me, kvd, even if I suspect deliberately! I am seeking evidence. Enjoy the TV!

I suspect you have the meaning of haradin right, Winton. But don't you think that that the question of sex is, should be, irrelevant in a meeting? Anybody who talks over anybody should be stopped or at least guided.

And why should there be different expectations as to how men and women behave at meetings? I actually suspect that the so-called gender differences are a bit of a myth in a professional situation.

More later. I have to eat.

Sadly I know all about the issues mentioned in that very interesting post KVD alerted me to.

My area of research is very male-dominated, and one sees the kind of behaviour described in that post among certain coteries of male academics. I have now developed a number of polite ways of robustly overriding such behaviour, "Excuse me, if I could get back to what I was talking about before you interrupted me...", "As I was saying..." "Returning to the argument I was making..." etc etc etc. The precise tone depends on how rude someone is being. I have shamed some men into behaving themselves in this way, although on one occasion it really didn't work. A particular man was a most unpleasant interlocutor when I gave a talk, but it backfired on the fellow very, very badly in the long run, as word got back to others.

In my view, arrogance is often directly proportional to insecurity. I have discerned in those who have treated me in this way a deep insecurity as to their own intellectual prowess and a desire to put down others and silence them. I've had the same treatment from a woman once too, although her modus operandi was totally different (smiles to my face, stabs to the back).

I think this kind of behaviour occurs when people are trying to impress others, and they don't realise that the truly impressive thing is to be open-minded to others and to listen to criticism. That is what shows true intelligence and academic prowess.

Pooh, sorry my internet is on the blink and keeps posting everything twice! I'm not saying controversial things and deleting them!!!

P.S. Here is a definition of 'harridan' - may be derived from a French word for horse?!?

Just watched Judith Sloane talking over Joseph Stiglitz on Q &A. I thought she did it rather well.

Sorry I went to bed so early, Jim! (Wasn't "back to TV" - that was a riff on the other link I posted)

The comment you provoked from LE (two in one week! A record!) illustrates exactly the sort of thing I've seen many times in meetings where women are present and, on the face of it, are of equal standing - things like partners meetings, committee meetings etc.

I think there is some of what LE says about "arrogance" in there, but I also think that men seem to wish to make a decision (any decision!) much faster than women; women seem more capable of teasing out all sides of a problem than men, I think.

A bad metaphor: men see a nail, and will vote for the immediate purchase of a large hammer; women will think of such things as the positioning of the nail, perhaps use of screws as more durable, the look of the finished process, the ease of replacement, the costs of alternatives. I could give several examples from meetings I have attended in an advisory capacity where such considerations were brushed aside, and the wrong decision was made - because the access to other considerations was being provided by "a woman".

As I said, a bad metaphor.

And Evan, I also like Miro's work - particularly the simpler ones; such bold use of colour!

Re Badham's painting. To quote McAuley's poem "At Rushy Lagoon", >>[because] It is a world of sense and use<<.

Winton, I suspect that Professor Sloan could manage that with most people!

Michael, I am bringing the poem up in the main post. Hadn't read it; liked it!

LE is striking multiple comment post problems. She wondered: 'harridan' - may be derived from a French word for horse?!? Quite!

kvd, fair point. My difficulty is that in a female majority or close to equal gender balance work situations the same rush to decision, the desire to move on.

Men and women are socialised differently I think - women more often socialised to guard the relationship; men more often to care about outcomes and have a rough and ready approach to process.

In the world outside the home I think there is a bias to the masculinist way of doing things.


i heard about this blog & get actually whatever i was finding. Nice post love to read this blog
Approved Auditor in DMCC
Virgin Linseed Oil BP