The aging of the Australian economy

Across the ditch, New Zealand's Reserve Bank has lifted interest rates for the fourth meeting in row, taking the cash rate to 3.5 per cent. Boosted by diary and construction booms, growth is forecast to hit 3.7 per cent this year.

The Australian economic outlook is far patchier. One side effect is a drop in beer sales, apparently driven in part by reactions to the recent Federal budget.  Another sign is May’s drop in retail sales. Yet apartment construction continues.

My daily trip too and from the office draws out the contrast. As the 343 bus crawls its way through Rosebery towards Green Square, the cranes are everywhere with the new apartments. Traffic is becoming a  nightmare. The road systems are simply not designed for this increase in density. By contrast, when I reach Parramatta, the big Westfield Shopping Centre has had sales signs everywhere. It is connected with the previous warm weather, this reduced clothing sales in particular, but it a little more than that. People are still cautious, reluctant to spend.

That’s not limited to consumers. Business is reluctant to invest too. The Australian economy is going through an interesting if difficult re-balancing period.  Private and business savings including the growing superannuation pool slosh around seeking opportunities. Interest rates on savings are at a level not seen since the controlled interest rates of the 1950s.

Housing and share prices are at record highs. “Give us our infrastructure projects” is the daily cry of superannuation fund managers. “Please privatise ASAP”.

I am a strong supporter of the compulsory superannuation levy, but I didn’t properly realise the extent to which the growing pool of funds would out-run the capacity of the Australian economy to provide local investment opportunities. I always saw international investment as a diversification strategy, not something that would be driven by the absence of local opportunities. To a degree, we seem to be in the Japanese position. Lots of local savings with no where to go.

I haven’t followed the stats in detail, this is not a properly informed comment, but to my mind the growth in Australia’s international investment has been quite remarkable. It began from a low base and then just grew.

The net figures concealed the growth to some degree. We were, as we had always done, drawing money in to fund particular local projects especially in mining. But we were also, and to a growing extent, sending money out from areas lacking investment opportunities.

Its an odd thing, really. I am not used to thinking of Australia as an aging, mature economy, yet that’s we seem to be becoming. As the debts incurred during the mining boom are paid off, Australia 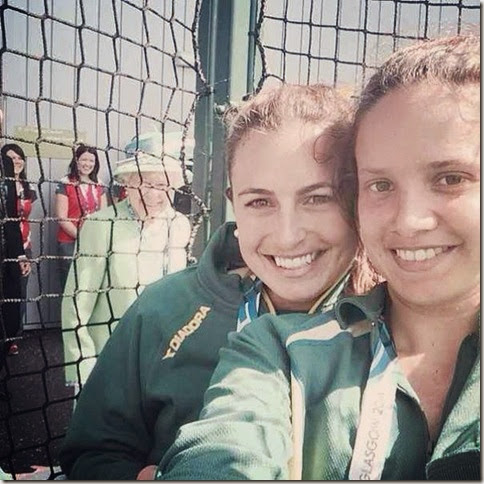 may become a net capital exporter, living off its accumulating savings.

As an aside, that has nothing to do with economics, that dratted man kvd drew my attention to the Commonwealth Games hockey.

Since youngest began playing as hockey goalie, I have spent much time watching the those remarkable hockey girls of all ages and levels.

Subtitled the Queen photo-bombed our selfie, it’s gone viral, I doubt that the Queen knew she was in the shot, but she is clearly enjoying it as much as the girls.

Oh, kvd, no scores please. I started watching the Malaysia-Australia game, I am reasonably sure Australia won, but I had to stop.

Well, I resemble that! So be advised the Malaysians won 21-14. Or was that the lawn bowls?

More importantly, I'm wondering if that photo is the first notable example of "photobomb" and "selfie" being used together?

Whatever, I think it's a great, happy pic - typical of Commonwealth Games, which are somehow more informal than the big O.

Based on later reporting, it appears that Queenie might well have known she was in the shot. Still a nice one though.

I ignore the rugby seven results.

I'm pretty ignorant of economics and even more so of business.

I'm wondering to what extent there is lack of business opportunity or whether it is a desire of business for guaranteed returns (eg. government paying infrastructure companies when the project doesn't produce the funds the companies want).

Wanting guaranteed returns I well understand (I would want this for my super - if I had any).

There does seem to be a difference in Australian business's willingness to invest compared to say the US or China. But this may just be my ignorance.

Hi Evan. If you look at this post I did last December - http://professionalservicesmanagement.blogspot.com.au/2013/12/friday-economics-economic-outlook-2014.html - you can see the decline in investment in the developed world in particular since the early seventies.

At present business is awash with cash but is not investing because it can't see the returns. Government investment is down too especially in infrastructure.

It is fairly common in history for countries to get wealthy, have surplus funds that they invest and then live off. Call it nation retirement. If the UK hadn't lost its wealth in two world wars, it and the Commonwealth would still be powerful.