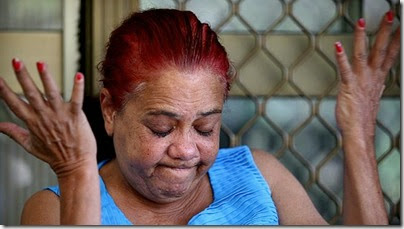 Sometimes I shake me head. This story, Cairns Grandma held in custody by police over $20 parking fine from 22 years ago, was one such.

The basis story is a simple one. Mrs Deshong was robbed. She called the police. She was arrested and held until a $22 parking fine incurred twenty two years ago could be paid. The amount with interest now totalled $131.

Mrs Deshong is an Aboriginal woman who has worked with the police and community to try to improve conditions for Aboriginal people. The story says:

Cairns Crime Prevention Sergeant Cary Coolican said executing warrants was one of a variety of jobs police faced on a daily basis.

“At the time this initial fine was issued, unpaid fines were converted into warrants,” she said, adding that once it came to the attention of the officers involved that a warrant existed, they were required to execute it.

“The officers acted lawfully and actually took steps to reduce any potential discomfort for the woman by bringing her to the main police station rather than the watch-house.”

They also quickly made arrangements for family to pay the associated fine and finalised the matter as soon as it was, she said.

Ms Deshong said she still hoped the thieves would return her handbag anonymously into her letterbox.”

Let me disentangle this story a little.

We live in a rules based society in which the range of rules has increased. We also live in a society where discretion in enforcing rules has constantly decreased. Indeed, it can be a criminal offence to do do so. Then, too, we live in a society where with time, considerable cost and through the miracles of computing, past offences of all types can be tracked. This is absolutely necessary for the rigid  application of the current rules.

It is sad but true that Governments like to enforce rules. They also like to collect cash. So they use the wonders of computing to cross-link, to enforce.

I was listening to a friend the other day on the phone. Her son had incurred a speeding fine while driving her car, but had not told her. The car had had its registration suspended for non-payment of the fine. She found out by accident. She had been driving an un-registered vehicle, a criminal offence. She could have been arrested and heavily fined. Now she was trying to pay the fine, to fix things up. She could do so, by credit card. but it would all take time to process. Meantime, she had the car at a parking station. She couldn’t leave it there.

In NSW at least, traffic offences have become a growing cause of incarceration among the young, especially the Aboriginal young. The root cause is not serious accidents or even misuse of cars in a conventional sense. It is failure to observe rules, to pay penalties.

We have made it harder and more expensive to gain driver licenses. Many Aboriginal kids live in the country. Some have been able to drive since they were very young. Cars were around, they drove. Those kids can’t necessarily get their licenses now. Just being able to drive is not enough. You have to comply with all the formal requirements. Then you can have your license suspended for ever more reasons.

Among the Australian young as a whole, the proportion with driver licenses is in decline. I think that’s a problem.

Traffic offences including non-payment of fines have been a main cause of rising prison numbers among the young, especially the Aboriginal young. It costs a lot of money to put and keep someone in jail. There they learn new things, including new ways of making cash through crime. Back to jail they go. Up go the costs.

I was at a meeting this week on a policy change. We were considering a rule change introduced in a bigger agency. There was pressure to apply it to us. I thought that this was actually crazy stuff. I first ran numbers on this last year. It did not compute then and does not compute now.

The change addresses a real problem. I don’t actually have a difficulty with introducing it in the bigger agency subject to review. I can see the argument. Let’s test the results. I can also see the argument for introducing elements of it on a carefully targeted basis in the agency I am presently supporting as a trial. No matter which way I cut the numbers, I cannot see any positive results from mandatory application. But as a trial focused on our client needs, let’s test to see what we can do.

In working on this project, I am working with two colleagues in particular. One has immense knowledge in the general subject area, the second is an Aboriginal women who knows her community and has front line experience. I respect them both.  My challenge is to find a path that meets Government needs and the incredibly complex NSW decision paths and pecking order, while also making real sense for my agency, it’s role and those it is meant to serve.

I must say I’m struggling. I have two tasks. I have to drive home what won’t work even though it is also mandated. Then I have to suggest an alternative path. It’s not easy.

Returning to Mrs Deshong. Accepting possible misreporting, accepting all the complex issues involved, what happened is just wrong. Mrs Deshong’s experience should not have happened.

Thank you for your comments. You have shown me another perspective of the situation, and that is how these minor infringements can have such a long lasting, detrimental affect on peoples lives.As for myself, I have not disputed the authenticity of the originalfine, as my memory is not amazing enough that after 22yrs I can recall where I parked on a particular day,or if there was a ticket on the car.Therefore I paid the fine. My complaint in this matter is the longevity of the fine, and most importantly the manner in which I was treated.

Hi Dorothy. That, the comment from you, was an unexpected pleasure.

I know from my own experience how easy it is to forget fines or, indeed, not realise you had been fined. I have also been writing on the consequences of blind rules applications for a while.

One of the things that made me really uncomfortable in your case was its impact on the work you have been doing. A second was the apparent unfairness.

I don't know the Queensland situation. I do know NSW. The disfunction in many Aboriginal communities places huge burdens on those within communities, men but especially older women, fighting to hold communities together, to address problems. They are quite remarkable.

I hope that you will continue your work.