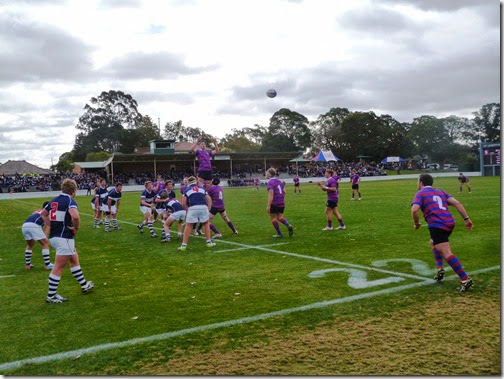 The NSW GPS (Greater Public Schools) rugby competition is on again, so I spent much of yesterday watching my old school, TAS  (The Armidale School) play St Joseph's College. TAS is in the blue and white.

It’s a big logistics exercise for the school. Every second week during the rugby season, some 150 boys board buses on the Friday afternoon for the seven hour drive to Sydney. They spend Friday night camped in school facilities such as gyms, Saturday play their games and then re-board the buses for the drive back to Armidale.

On the other weekend, a Sydney school repeats the exercise by coming to Armidale. While in Amidale, the 150 or so Sydney visitors are housed and fed at TAS, again a big logistics task. There are eight Sydney schools in the competition, so they only have to do the trek once every two years, but TAS is involved every weekend.

Why bother, one might ask? Surely the resources so involved could be put to better use?

It’s partly a matter of tradition and sentiment. TAS is a traditional rugby school, although other sports including soccer are strong and growing. The boys want it, while the parents and old boys support it. TAS is also quite important to the Australian Rugby Union.

The school competitions that act as feeders to the game at national level have become quite unbalanced. Unlike New Zealand where the sheer dominance of rugby means that every school participates so you have a wide spread of top schools, a huge gap has opened in Australia between the smaller schools and the bigger ones with their large student bases and capacity to afford professional coaching. The number of boys playing rugby has dropped as a consequence.

The NSW GPS competition can be taken as an example. There were eight teams in the Sydney competition, with TAS participating on an irregular basis, limited by distance and the unwillingness of some Sydney schools to travel. Faced with cricket score results as well as dangers to the boys from the increasing speed and physicality of the modern school boy game, first Sydney Boys High School and then Sydney Grammar school, both once big rugby schools, pulled out of the first grade competition. Even among the remaining six, differences in standards made for a potentially unbalanced competition.

I mentioned the increasing speed and physicality of the modern school boy game. While I was writing, this video came up of Saturday’s Scots (yellow) vs Shore game. Scots won 64-7. Scots is playing some very good running rugby, but look at the size and speed of the Scots’ boys.

Returning to my main theme, the NSW GPS had a problem. Would rugby survive as a core GPS sport or would it become a sport played among just six of the nine GPS schools? All this created an opportunity for TAS. First it joined with Sydney Grammar who wanted to stay in top grade, playing some TAS teams in place of Grammar in lower grades. Then when Grammar pulled out of the top two grades in the face of continuing losses, TAS supported moves to create a new official NSW GPS competition level, the thirds. This allowed the TAS, Grammar and High First Fifteens to participate by playing against the Third Fifteens of the other six schools, thus continuing the involvement of all nine schools in rugby.

I said that TAS was quite important to the Australian Rugby Union. This is true over and beyond any  involvement in the NSW GPS. The school’s numbers make it difficult for it to consistently field teams that can match the Sydney big six. the total number of boys playing Rugby at the bigger schools is larger than the total number of TAS boys, far larger than the number of TAS boys who play Rugby. However, it is a high quality rugby school with facilities and coaching staff that match those in Sydney.  Further, as a traditional boarding school its facilities allow it to host major competitions.

The TAS Rugby Carnival is, I think, the largest junior rugby carnival in the country for 11-12 year olds open to both schools and clubs. In 2013, the Carnival hosted 48 different schools and clubs with over 1,000 kids plus management staff. The school hosts visiting school teams such as the Fijian schoolboys side; it acts as a feeder for country and indigenous representative sides; its coaching staff coach a number of representative sides; while it provides facilities and personnel to support ARU development activities in Northern NSW. All this is important in keeping rugby union alive as a participation sport.

Beyond sentiment and TAS’s contribution to rugby as a sport, rugby is important to the school for economic reasons. While TAS now attracts a large number of day students from its immediate region, boarding is still very important because, among other things, it supports the physical infrastructure that allows the school to offer a wider range of facilities and services. 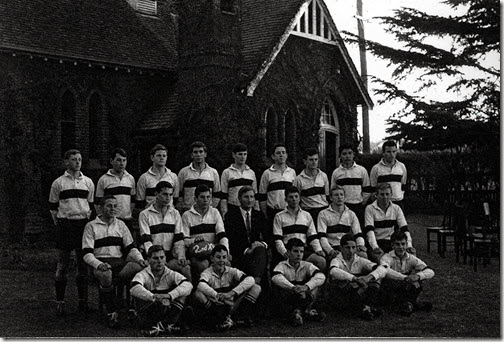 Rugby has been in decline as a school game. As someone who loves rugby, who played in the school seconds against those Sydney schools for no less than three years, I want to see the game grow. Oh, I am sitting middle row, second on the left, in this photo.

One of the things that worries me about the constant emphasis on performance is what do you do when the good starts crowding out the not so good to the point that it starts destroying the very thing that the competition is all about in the first place?

I don’t have an answer. I wish I did. Meantime, I will enjoy watching my old school play.

Nice summary of the state of play in GPS rugby.

Thanks, anon. If only I could see a solution!

Interesting. I remember the "arms race" headline in the SMH re GPS rugby and basketball, at http://www.smh.com.au/national/education/gps-competition-an-aggressive-arms-race-says-world-cup-hero-20130924-2uca7.html
Trouble with rugby and basketball is that they are both sports where particular physical traits are very important, either exceptional bulk and muscle, or exceptional height.

I'm sure that you are right re size etc. When I played rugby at school I was quite fast (a hundred yards in full kit at 11 seconds) and also biggish to the point that I was sometimes used as the battering ram. My peak weight then is now less than the half in a modern rugby team.

I really loved rugby. Because of my relative size and speed, I played lock or breakaway in my last school period. I just loved disrupting the opposition back line.

Now I despair a little. How do we get a competition that allows boys to play at an equivalent level with each other?