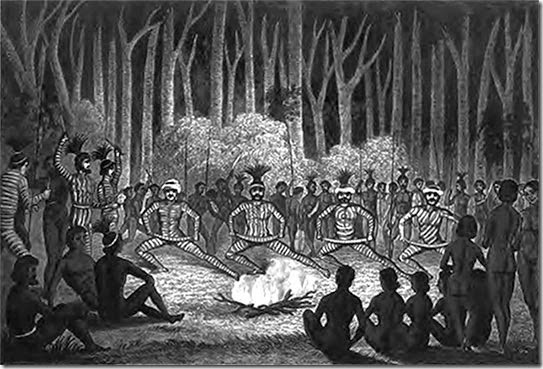 This sketch is from Clement Hodgkinson. It shows a dance (1842) in the Macleay Valley at the end of an initiation ceremony.

Hodgkinson’s book Australia from  Port Macquarie to Moreton Bay is a great travel read. Click on the link above and have some fun.

Just at the moment, my train reading is Geoffrey Blomfield’s Baal Belbora: The end of the dancing (Apcol Chippendale 1981).  This is a book written by a local grazier with a passion that has come to occupy a special niche in Australian historiography.

The book tells the story of European-Aboriginal relations, and especially the massacres in what is called the Falls Country. Located in Southern New England, this is where the watersheds of three rivers join. The name relates to the sharply falling terrain rather than water falls, although those do exist. 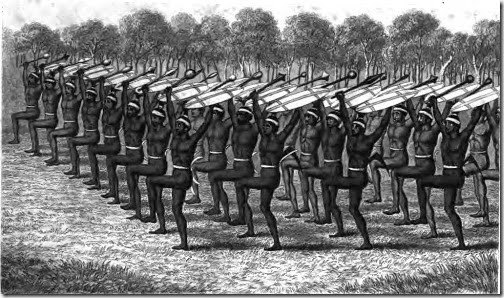 This is another drawing by Hodgkinson from the Macleay Valley called dance of defiance.

Rereading, Geoff’s book is a funny mixed up book. Part history, part polemic, part literature, it was severely criticised when it came out. I know that there were later editions. I do not know to what extent Geoff modified them to meet the criticisms.

Re-reading it now, I tune out some elements. I think that the book is simply wrong in parts.

I do accept, however, that Aboriginal society was, by the standards of this day, relatively peaceful, lacking in total war. Here I challenge that common nostrum that hunter-gather societies were somehow red of claw; civilisation came with farming. That’s stupid, to my mind. Farming was an essential pre-condition to the militarised state or empire.

If I exclude the tuned out elements in the book, it provides a sensible framework for the analysis of frontier wars in one place at one time. That’s it’s strength.The Fall Country is important, for that’s where the remnants of three or four language groups were forced too and that is where they stood and fought. They lost, but it’s important to understand what they did and why.

As an historian and story teller, it is not necessary for me to take sides. I am interested in what was, what happened and why. Here Geoff helps me, adding to my knowledge of facts but also, more importantly, the dynamics of the situation.

Geoff’s book is also very important for another immediate reason. It forms a core base for the second chapter of my New England Travels. I am basing the book around road trips. My second chapter starts with a picnic at Raymond Terrace and then follows the road up through the Falls Country.

I have been interested in the recent dispute over the use of the Liverpool Plains, an area somewhat to the east of the Three Rivers region.

The existing occupiers of the Liverpool Plains appear the inheritors of the land due to events such as the Myall Creek massacre.

Whilst I deplore coal mining in the current environment, I find my sympathy for the land-holders minimal.

I'm sorry. I missed this comment, anon. Some of the Gomeroi (Kamilaroi)traditional owners are involved the protest. But I do take the force of your comment

Hello Jim, Idle comments from non Aboriginal people who will never understand the complexities of our culture will never end. Most still do not know that in the early days in Sydney a bounty of 10 pounds was placed on their which of course led to indiscriminate killings. Also laws were passed in the early 20th century to prevent interbreeding. Dr. Thomas Smith