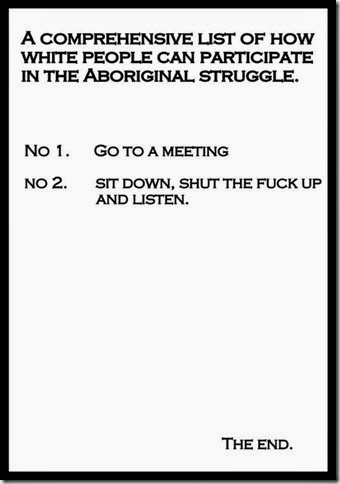 I have seen this type of message before from Aboriginal activists, but haven’t responded. I first saw it in a replication of a more detailed list originating from Canada and repeated in Australia. While there were more steps, the core of the message was the same. Sit down, shut up and do as you are told.

While I understand the point, one has to listen to learn and there is and always has been a lot of telling Aboriginal people what to do, it’s actually quite dangerous.

I am not Aboriginal. If I go to an Aboriginal meeting specifically concerned with Aboriginal issues I do shut up unless I have a specific role or am asked for advice. That’s no different from what I would do if I went to a Rotary meeting as a guest. I am not a member of the group.

I also respect the desire of Aboriginal people who wish to control  or manage the evolution of their own culture or society, although I am also very aware of the continuing divides within the Aboriginal community, including the way that activists seem to lecture or wish to dictate to their own community. In that sense, they are no different from anyone else. Activists of all stripes are always inclined to do this.

All this said, why do I think that its dangerous?

First of all, its actually very rude. My experience of Aboriginal people is that while prepared to make blunt comments, they are also naturally polite. Sometimes this impedes communication. They make blunt comments to each other afterwards, but don’t express them at the meeting. The  way the message is expressed is, to my mind, a breach of Aboriginal courtesy.

I guess that you could say that that’s a style thing. Of more importance, this type of message risks being divisive and, in the end, self defeating. The Aboriginal community is a small percentage of the Australian community. Achievement of certain Aboriginal objectives requires support from the broader Australian community. You don’t get this by ramming this type of message down non-Aboriginal throats. Oh, and by the way, a significant and growing proportion of non-Aboriginal Australia is not white. Does the message apply to Chinese Australians as well?

Beyond all this is a very particular view that only Aboriginal people are really entitled to comment on or engage in Aboriginal issues defined broadly as anything about or affecting Aboriginal people. That’s plain silly.

In the end, all this makes it hard for a non-Aboriginal person to 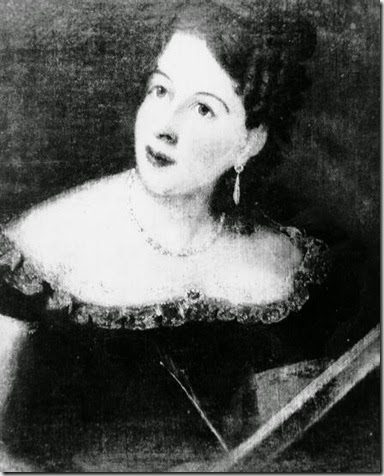 participate in the Aboriginal Struggle however defined. Why bother? I continue to try because I have defined a limited range of things that I think are important and where I can actually make a contribution. Beyond that, I tune out as (I think) do an increasing proportion of the Australian population.

Still, I do try. In this context, have you ever heard of Eliza Dunlop’s The Aboriginal Mother?  Bet not.

Published in The Australian on 13 December 1838, it was a reaction to the 1838 Myall Creek Massacre. It was then set to music by Isaac Nathan for performance at a full orchestral concert in Sydney in 1841

Eliza Dunlop was an interesting woman. A poet, she was deeply interested in the Aborigines. At Wollombi, she recorded the Aboriginal dialect and the Aboriginal songs given to her by Wallati which she translated into English. One begins:

Our home is the gibber-gunyah (cave in a rock)
Where hill joins hill on high
Where the turramu  and berambo (weapons)
Like twisted serpents lie.

I really, really, don’t want to get involved in some of the current discussions about the Aboriginal Struggle, although I retain my general policy interest in Aboriginal issues. It is far more interesting and, I think, useful to continue to focus on recording what was and what happened in the areas where I have most interest.

There was a quick and rather nice comment from Legal Eagle on this post. It’s worth reading in full, But I thought that I should bring up the last part of the comment in the main post. She wrote:

YES, it is really important to listen. And, I would suggest that before you decide to "speak for" Aboriginal people, you should at least meet some and preferably meet a variety of Aboriginal people. BUT I don't think that means I should shut up and not give my view where appropriate AFTER I've listened. Some of my own experiences may give me insight into resolving issues.

Actually the fundamental thing I learned from tutoring Aboriginal people was that you can't fix things for people: but you CAN give people tools to help themselves, and you can form a productive relationship where you learn from each other and listen to each other.

The last sentence captures something I have learned and try to practice. Even where I disagree, I do believe strongly in giving people the tools and information they need to argue their case. I am not thinking just of the Aborigines here. I also find that when I do this, it acts to temper views.

Excellent post, Jim. I suspect those kinds of notes are designed to deal with the kind of people I came across when I was in native title activism at undergrad uni. There were a few students who said things like, "I don't know any aboriginal people, but what I think they should do is..." or "Are you in Free Tibet, Free Somewhere or other else, Save the Rainforests as well?" The latter person had taken on a suite of "left-wing" causes of which Aboriginal activism was only one, and again without necessarily knowing that much about it.

The reason why I was into native title activism was (a) I knew the law and I knew there was absolutely NO threat to anyone's back garden - fee simple title extinguishes native title and (b) I had tutored a number of indigenous students. Tutoring those students was very interesting. They were not activists, and at least two of my former students disagreed fundamentally with the prominent Aboriginal activists who were advising our native title group. Their views were really different to the views of the activists and from each other's views. Then I was thinking: you can't just take the views of the prominent activists as reflective either.

YES, it is really important to listen. And, I would suggest that before you decide to "speak for" Aboriginal people, you should at least meet some and preferably meet a variety of Aboriginal people. BUT I don't think that means I should shut up and not give my view where appropriate AFTER I've listened. Some of my own experiences may give me insight into resolving issues.

Actually the fundamental thing I learned from tutoring Aborginal people was that you can't fix things for people: but you CAN give people tools to help themselves, and you can form a productive relationship where you learn from each other and listen to each other.

To be less polite than LE.

Your comment, "Sit down, shut up and do as you are told." is not what the 'meme' says. It does not speak of doing what you are told but of listening.

I do think this kind of thing is not directed to someone with your skills and politeness. More to the kind of people that LE spoke of - and who I think we have all encountered much more often than we would like.

Thanks Jim, I'm so glad you found the comment helpful.

I think it is listening before you speak which is the key, and as you say, this is something which can work well in all advisory contexts, not just in advising Aboriginal people. When I think of the things which most irritate me in a friend or family member who is otherwise a nice person, it is usually that someone doesn't listen to me.

I was reading it in a context, Evan, set by some previous stuff I have seen.

Everybody's talking at me; can't hear a word they're sayin'; only the echoes of my mind

I think you are lost as soon as you accept a label not of your choosing, just imposed for arguement's sake - always by others.

Obtuse as always. I think I'm asking why you allow yourself to be defined by (who?) somebody as a "white" Australian.

Sort of mitigates at the outset against any discussion amongst equals - no?

I rather liked that comment by the young Canberra tennis player the other day: "between us we have won 14 Grand Slams, so it should be an interesting match".

This over-polite, tentative acknowledgement of one Australian by another only reinforces, emphasises, difference. In this context I don't know any other term than 'racist' for that sort of attitude.

Good morning, kvd. Allowing oneself to be defined by another can certainly be an indicator of and response to prejudice.

Interestingly, I first came across this at uni when I read a study in Oceania examining the way in which prejudices about Aborigines in the non-Aboriginal community negatively affected Aboriginal perceptions of themselves. I have never forgotten the message, although I can't remember all the details of the study.

Not quite sure of your point on our friendly young Canberra. Impressive bloke.

Jim, I'm not surprised that you failed to understand my point - which is something like this:

The language we use to engage with policy discussion on anything Indigenous is not necessarily appropriate for discussions between individuals.

In the latter case it can be off-putting, not to say condescending. I believe we are better served as individuals treating with each other as equals, never mind unequal dis/abilities - my reference to the tennis player here.

But the same level-eyed gaze between equals doesn't translate to discussion of (hopefully) useful policy directions. In that arena there are always competing, most times even more important, priorities.

This is just an observation; not in particular disagreement with your own views.

Accept those points, kvd. The language one is actually interesting at an official level because it highlights the difficulties in language.

Many Aboriginal people at least in NSW do not like the word indigenous. The word is used because Australia has both Aborigines and Torres Strait Islanders. The official formulation used in legislation is Aboriginal and Torres Strait Islanders with a similar but different definition attached to both. The difference is recognised in the flying of both flags on some official occasions.

It can all become a bit of a minefield!

Oh dear
A 'breech' is referring to one's nether regions, as in breeches, ie a covering for one's (usually male) bum, a breech presentation is a birth position in which the bum preceeds the head. I'm sure you meant 'breach', as in 'once more unto the breach, dear friends' etc, where the word means a breakthrough. you have inadvertently actually been quite rude!

Oh dear, anon. And I claim to b a writer! Stll, I don't claim to be speller. Correction made.