Monday Morning Forum – what do you like, dislike about Australian architecture?

I guess that this forum has an Australian focus. But if you are outside Australia, feel free to join in re the architecture of your own country.

What do you especially hate/like about current architecture, w 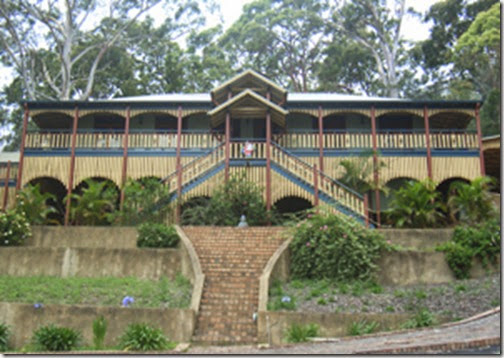 hat architecture from the past especially appeals to you?  Now to make my own position clear, I love verandahs. They are a very Australian thing. I also love internal court yards/gardens that you found in some Roman houses.

To my mind, the house should flow into the garden. This is an example of what is known as a Queenslander.   Actually, it too ornate for my taste. I love the lower verandahs that flow out into the garden. You can sit there in the still warm air of evening and look at through the trees, across tye beds.

For some reason, a lit of modern styles in industrial parks seem to go with an off-centre rectangle at the entrance. To my mind, that’s blood ugly!

What do you think?

In comments, kvd was not impressed by the above photo.

Well, someone has to say it: that picture is quite possibly the ugliest,least representative, example of "a Queenslander" that I've ever seen. And if there was an architect involved (and I suspect there was, because it lacks taste), all I can suggest is that he should have been put down at birth.

"McMansion" is the now-old term of contempt in NSW; that pic must qualify as the Queensland version.

So please - anyone reading from out-of-Australia - we are not actually as crass as that. (Mostly, sometimes)

Instead, he put forward this picture. Further comments follow the photo. 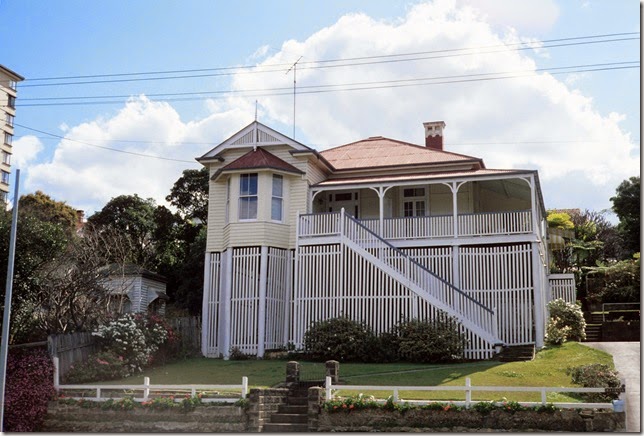 The Queenslander was designed for a hot climate when wood was the main building material. The downstairs area was open to the winds and mainly used for storage. Still, I do think that the top is an example of the more ornate style.

I hadn’t heard of architect Christopher Wolfgang Alexander until Evan mentioned him in a comment. You will find his Wikipedia entry here. This link will give you access to photos of some of his buildings, While this piece gives access to more set in a context. There is some really nice stuff there. He strikes me as my kind of architect!

Well, someone has to say it: that picture is quite possibly the ugliest,least representative, example of "a Queenslander" that I've ever seen. And if there was an architect involved (and I suspect there was, because it lacks taste), all I can suggest is that he should have been put down at birth.

"McMansion" is the now-old term of contempt in NSW; that pic must qualify as the Queensland version.

So please - anyone reading from out-of-Australia - we are not actually as crass as that. (Mostly, sometimes)

To add to your list, the terms Italian modern and Yugoslav gothic were used in Canberra to describe certain house varieties.

And some of Harry Seidler's stuff was pretty dreadful.

Jim, this is a more typical Brisbane version of a "Queenslander":

I have spent a dismaying hour Google-Street-Viewing my late Aunt's environment - Real Avenue, Norman Park, Brisbane - to find you a more authentic example - but alas, the street has been almost completely vandalised - possibly by the tosser who built that thing you posted.

The thing is, the lower story was just breeze and storeage - not ever habitation. Geckos, possums, and old uncle's fishing tackle - but not ever a place an aunt would use for more than gardening tools, or an occasional glance, to see it was tidy :)

kvd, you are being provocative, I think. However, it seems to me there is a problem with the steps in the garden. A bit too grand for the style of house, perhaps.

When I look again, you are right Jim. The steps in the garden are not aligned properly. But even if they were perfectly aligned, they would still look anomalous in my view.
The house looks good, whether or not it Is typical of any style. It is probably well situated to catch a breeze.

Winton - provocative moi? I accept I lack your gentle "a bit too grand for the style" ability - but you do put the problem well: these were "working houses" - i.e. practical, not particularly for show.

And the thing is, they were each enclosed by well maintained picket fences; not great swathes of imported pomp. But perhaps I digress :)

It is possible for modern architecture to be beautiful - check out Chris Alexander.

The problem is modernism I think - it's mass production, love of regular forms and concrete, its devaluing of craft and much else.

And as for climatically inappropriate - houses without eaves in Cairns!

Evan, do you have any links to buildings by Chris Anderson? And I agree with you re Cairns and eaves.

I don't know if this was Jim source, but I see that his picture is being used as an example of Queenslander style in this article -

http://www.natureoforder.com/ (a site for a series of books by him)

Hi Evan and thanks. You will see that I have carried these links through into the main post. I must go back to him at some point.

Thanks Jim. Glad you liked them.

This one has a certain panache:

A decidedly critical look at the influence of the modernists on cities
http://iview.abc.net.au/programs/human-scale-in-five-chapters/ZX9994A001S00

Evan, for time reasons, I didn't watch all of this.

I spent the first twenty one years of my life in a city of less than 15,000 people with close country connections. Then I lived in Canberra and then back to my first city with a population now about 20,000. During that time, I loved the bigger cities and especially the inner city areas. Then, in 96 for the first time, I moved to live in Sydney for family reasons. So I have been a big city resident for perhaps eighteen years, but have known and loved aspects of the big city throughout my life.

Living in Sydney has been a culture shock that I have struggled with. I seem to have lost both that closeness of my past and indeed the sense of what I valued in the big city.

When we talk about architecture, and I think that that was the point of the piece, we have to think about the patterns of life. It doesn't matter what the built environment is like if we have lost the closeness of life.

I don't enjoy diversity in my daily life. That, the daily life, incredibly pedestrian. Get up, travel for an hour-half, try to make that time productive, return in the same time frame, do the same thing. Now I live n Sydney, my experience of the diversity of Sydney life is greatly diminished.

I am on a diatribe. I will stop there.