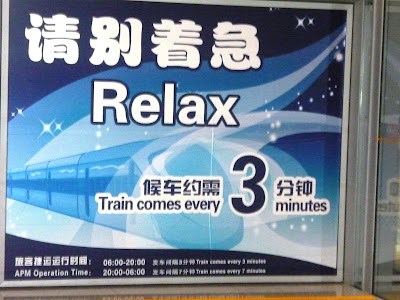 In a passing reference in a comment, Neil wrote:

At the same time, I couldn't help having the irreverent thought that at least Mussolini had the trains running on time.

Neil was, of course, referring to Sydney's train problems. He is not, of course, a supporter of the former Italian dictator, simply making an ironic comment.

I could not resist! The photo on the left is of a sign on the Beijing metro. I will say no more.

One thing that is nice about blogging is the way my fellow bloggers bring corrections and additions.

In a comment on this post, Winton Bates kindly pointed out that the story about Mussolini and trains was almost certainly a myth, pointing me to the following link.

Winton and I were once co-editors of Neucleus, the student newspaper at the University of New England. Later Winton, an economist too, was (among other things) a senior official with what is now the Productivity Commission. Now we are fellow bloggers!

The Wikipedia article on Neucleus is very much a stub. At some point I must write something about the Neucleus days, another world. As I remember it, Soo Khoo was editor before us, while Bob Graham (later a Tasmanian Cabinet Minister and also a former duty master with me at The Armidale School) replaced us in something of a student coup.

Soo Khoo was probably the first Chinese bloke to edit an Australian student newspaper (this was 1962). Our cartoonist was Indonesian.

I wonder how much Winton remembers from those days.

There is apparently some doubt as to whether Mussolini did manage to get the trains to run on time.

I know you can't believe everything you read on the internet, or anywhere else, but this account looks authoritative:
http://au.answers.yahoo.com/question/index?qid=20080629145945AAqQ46j

I have fond memories about Neucleus, Jim.

But I had forgotten how to spell the word, until I saw it again on your blog.
Cheers
Winton

Should write your memories up at some point, Winton. Do you remember the name of our Indonesian cartoonist? Rosidi Hendranto comes to mind, but I dont have any past copies to check.

I managed to find a few old issues of Neucleus, including March 1964.

Our cartoonist at that time was Adhi Hendranto.

I also managed to get side-tracked while searching for that bit of information. Among the headlines that caught my attention was the following: "Water situation serious". That was in April 1965. The article suggests that there was a possibility that the university would have to be closed down within a few weeks because of the depletion of town water supplies.

Thanks, Winton. March 1964. It woulnd't be Bed, Bool and Gardeners by any chance?