Sunday Essay - Musings on Australian foreign policy (among other things)

After this post, I am going to take a break in posting on this blog for a few days because I need to do some other reading and writi 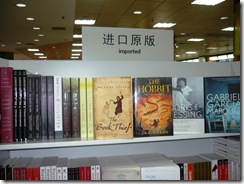 I took this photo in Beijing at the Foreign Language book store for youngest daughter because it displays the Australian writer Markus Zusak's The Book Thief in very good company indeed. This was a remarkable store especially in its English language stock selections - all sorts of older titles that I like that have simply vanished from Australian book shops as fashions change.

Why for Clare? Well, she went to a writer's course run by Markus and really likes him. This was her second writer's course - the first was a children's writer's camp run by another popular Australian author, John Marsden. I like Marsden's writing, he tells a ripping yarn, but the popularity of his main series says something about modern Australia.

The series is set in country Australia and begins with an invasion by an unspecified Asian power headed by a dictator. The invasion succeeds in occupying half the country. The Australian kids find themselves on the front line and fight back, wreaking great damage. 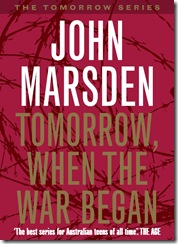 ent. The fear that we might lose our home - to be dispossessed as we had dispossessed the Aborigines - was very real.

Modern Australia is very different in its ethnic mix, yet the fear remains. You have to remember our history if you are to understand our national reactions to issues. I find it sad but not unremarkable that Marsden's books play to two central themes in Australian life - to fear, plus the nation's sense of nationalism centred on war. As other unifying national symbols have declined, been rejected, our military tradition has come to occupy central stage as the official central unifying element in a way that I for one did not foresee.

In our sister country of Canada, peace keeping has been central in recent years to that country's international military involvements. This is true of Australia too. However, there is a much harder edge in Australia in that we are prepared to use military force to directly defend our strategic objectives. If you look at the official messages, you will see that the need for the country to defend itself, the prowess of our military forces, the value of Australians sacrificing for their country, are central.

I do not want to be misunderstood here. I find it inconceivable that Australia would ever invade another country just to gain territory. But our willingness to use force in defence should never be under-estimated. We are being trained for it. Just as happened in the two previous world wars, Australians of all ethnic groups would rush recruiting stations should full war break out.

One thing that few Australians realise is just how complex and sophisticated Australian foreign policy is. Some Australians would laugh at me for saying this, yet it's true.

In military and economic terms, we are presently a mid power facing inevitable relative decline. We have done much better than many expected to this point - remember, twenty years ago many in Asia saw Australia as the soft and lethargic sick man of Asia, some still do. Still, the facts of economics and demography are working against us.

Fortress Australian has been one option much canvassed in the past. Keep within our walls, make the pain of action against us so great that no-one will try. The problem with this approach, although it remains one element in official thinking, is that we depend on one side upon sea lanes that could be easily cut, on the other on the import of key products and equipment to maintain our defence. To go this route would required us to re-build domestic capabilities at considerable cost, protection in the face of a globalising world.

Having studied elements of the Australian response to the Second World War, at the way in which national policy was slow to respond, I think that we could do more to maintain strategic capabilities. However, I do support the core of the alternative approach.

The first element in this is trade policy. Here Australia is building a network of free trade agreements designed to integrate the Australian economy into our key trading partners of the future. We hope to gain in economic terms. However, we are also aiming to become economically important to those countries as suppliers. More trade. less threat.

One of our problems here is the potential of conflict among trading partners. Here ASEAN is a key. In total, ASEAN is a critical trading partner. More importantly, ASEAN countries form a military buffer, while many of our most vulnerable trade routes run through ASEAN waters.

There have been problems in the Australian relations with ASEAN, including especially the attitudes of Malaysia's Mr Mahartir as well as Indonesia and East Timor. Yet when you look at our foreign and trade policy towards ASEAN, it has been both persistent and consistent. We are working to build relationships.

The longer term advantage that Australia and New Zealand ( I group the two countries together in this context because of the linkages between them) have in ASEAN is that our combined economic size, while declining in relative terms, is still very high. We offer a largish market, we can supply food, commodities and technology.

My personal view is that ANZ and ASEAN will inevitably move towards a more integrated economy. In this, our relations with Indonesia will be of particular importance.

Indonesia are Australia are very close in geographic terms. They are in fact next door neighbours. To put this in perspective, Indonesia is closer to Darwin than Sydney is to Brisbane. However, border myopia creates a problem - most Australians see Indonesia as a bit distant.

It will not be easy to build closer integration with Indonesia. As a simple example, the Indonesian population is now projected at 300 million plus. This dwarfs the equivalent Australian projections. Free movement of people could swamp Australia. Yet closer integration including people movement will come. We have to decide how to manage this.

Again, my personal view is that it is going to come in small incremental bits. Only looking back will we be able to see the changes.

Indonesia must succeed in developing. The implications for Australia as well as the Indonesians themselves are just too dire to contemplate. Yet the more Indonesia succeeds, the more unbalanced the relationship may become. Imagine an Indonesia with two times the population, six times the GDP.

Just at present, Australia's GDP is roughly three times that of Indonesia. We are talking of a world in which the Indonesian economy is twice as large as Australia's with the gap growing. Yes, this is good for Australia, but it does change things.

I am nor sure how things will work out. What I am sure is that we should be aiming to build as many links with Indonesia in particular as we can.

I was amazed with your view and the way how you presenting this issue elegantly.

I thought, the citizen of both countries ought to remove negative feelings for a better relationship.

By the way, I'm choosing your blog at my latest post.

I am glad that you enjoyed the post, Tikno. Thank you for selecting this blog for inclusion in your list.

Hi Jim.I am a chinese reader.I get your blog from Niar's blog.Your post was great.I like your post and It's worth taking me lot time to understand.
I had add you to my friend's blog.Pls let me know if you don't like it so I will delete from the list.

Keep writing and keep your passion.

Hi Ben. I have left a comment on your personal blog - http://ramboblogger.blogspot.com/.

I look forward to more posts that will educate me about China.