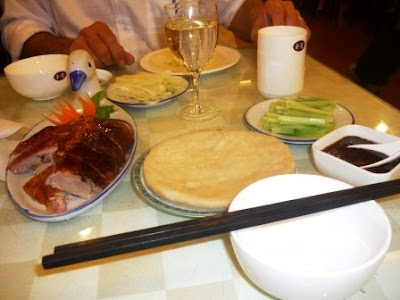 Back in March in Problems with Peking Duck I vented my anger over what I saw as the diminished quality of Australian Peking Duck. So while in Beijing we obviously had to try Peking Duck.

I must say that I did think it nice, although not the best I had ever had. That was in Canberra.

Our food experiences on the trip (I will talk about this at some point) drew out just how mixed and eclectic my tastes in food had become, with a whole variety of influences merged together in my mind and my cooking.

The real trigger was my attempt in Beijing to get a dip of soy plus one a chopped up fresh chili. I like this as a dip, especially with greens. I made three attempts at different places - it simply could not be done.

This created confusion in my mind because I thought of this as Chinese, and indeed most Chinese restaurants in Australia will provide it. That was not the case when I first started asking for it. Then I realised that the confusion came about because I did have so many influences merged together, distinguished only by very general labels.

A little while ago I ran a short series of posts on the topic of what would you describe as Australian cooking. For the benefit of international readers I have listed the posts at the end.

One of the key issues in the discussion lay in the question: is there such a thing as an Australian cuisine? My answer was yes, simply because our cuisine is what we eat. At the same time, I have to admit that it has become a strange mixture.

Thinking about all this, I thought that it might help me and be of interest to international readers if I looked at some of the influences on my own cooking. You will see that it really is a strange mixture.

Steamboat is one of my favourite meals, although I have done this very little in recent times because steam boat is a sociable meal suited to a group. My family likes to eat in front of the TV on those now few occasions when everybody is home together!

With steamboat you start with a pot in the centre of the table with a bubbling broth - I use chicken stock. In the beginning I used a charcoal burner, but an electric wok is now easier.

You cut up meat and fish and a variety of suitable vegetables, place a mixture in a small long stemmed holder and place them in the bubbling stock. When cooked, you place them in a bowl with rice and use chopsticks to dip them in various sauces. The broth itself is drunk at the end of the meal.

Steamboat itself is, I think, Vietnamese. Certainly I acquired the habit from a group that included a number of Vietnamese girls with Australian boy friends who had fallen in love with Asia. This was a fun group whose members went everywhere, including a later Deputy Governor of the Reserve Bank.

If Steamboat is Vietnamese, the dipping sauces were more varied. In My case they included the required soy with chili, soy plus vinegar (Japanese I think, acquired from Japanese BBQs at the Shogun in Sydney - but that's another story), sambals (South East Asian) as well as things like Hoi Sin.

Steamboats contrast with roasts, a traditional English stream that my family likes. And so do I. I cook a roast at least once a week. Roast chicken on Sunday is one of the few real combined family meals.

Even here other influences come in. I marinate the chicken with lemon steeped with oregano (Italian, I think), the stuff it (English) and rub it with olive olive (Italian), before placing it on a drip tray in the pan.

The use of olive oil has been one of the big changes in Australian cooking. Olive trees were planted soon after the Europeans arrived, but for much of the period since olive oil was seen as medicinal. I now use olive oil all the time, as well as sesame oil (South East Asian, I think). I very rarely use vegetable oils.

The first curries I ate were a mild English variant using curry powder imported from the Indian raj. Cooked by my mother, this was the only time we ate rice apart from sweetened rice deserts (rice with prunes comes to mind) that I thought were dreadful. At University, my friends cooked me real sub-continent curries, hot and very spicy. I turned red, sweated, but gobbled them up.

When I came to Canberra I taught myself to cook a variety of curries, using original ingredients. I have forgotten now how to do this. In addition, I can no longer eat such hot curries without discomfort.

If alone, I love a moist curry (if you are broke, a potato curry gives cheap bulk) with lots of juice, My wife is a better curry cook now, although her curries are drier than mine. Still, lamb with spinach is to die for.

The Europeans brought chilies from the Americas to Asia. There it was incorporated in South East Asian cooking, among others.

I learned about chilies in Canberra, one of the first Vietnamese influences on Australia.

As an aside, I don't think that I have ever seen a proper article on the Vietnamese influence on Australia. To my mind, it was quite important.

My family does not share my love of chilies. Unlike the Americas, and here I express a prejudice, the South East Asian use of chilies is more subtle, far less like that episode of the Simpsons. My youngest will laugh at Homer, but not eat a chili. In fairness, I should add that she blames this on me because I gave her a very hot chili to eat!

A salad in a bowl with a little bit of fish sauce (something else I always have now) and chili makes a great lunch.

Good heavens, look at the time. I have become completely distracted!

My thanks to Neil Whitfield for pointing me to this Wikipedia article on steamboat. I do love the way in which our blogging community constantly extends our collective thinking!

"It originated in northern China and spread to the south during the Tang Dynasty (A.D. 618–906). Over time it was enhanced with different kinds of meat, and in the south with seafood. By the Qing Dynasty, the hot pot became popular throughout most of China." -- Wikipedia, which confirms what M says.

M discovered that my old Sunbeam electric frypan, with the water just simmering, made a perfect steam boat. The most memorable one was when he dropped whole frogs into it... They looked disturbingly human, but tasted good.

Now that's an interesting one, Neil. I always thought that a hot pot was more liek a stew. A steam boat is very different.

Frogs. In Canberra I went to a function at the French embassy. I likkes this chicken stuff and went back for more. The sign that siad Frogs Leg, previously fallen over, had been set back up. There was a sharp drop off in those eating!

"Chinese steamboats are known as hot pot, or sometimes Chinese Fondue." And this time I have given the link.

I'm not talking about frog's legs there, but the whole frog -- minus the head. They were a frozen item available in Chinatown. Not something I have ever bought for myself, but M bought them for some special dinner we once had. He'd enjoyed them in Shanghai. Otherwise, we had thinly cut lamb, pork and beef -- he froze the meat and then virtually shaved it -- plus various Chinese greens, such as bok choi, and garlic chives and chilli... Very tasty.

Neil, I have put up a postscript on the steamboat link. Yes, i did not fully focus on full frogs vs legs.

I suppose the thing that surprised me about frogs legs was the size of the darn things. I had no idea that frogs grew that large!

As a Chinese reader.I must say I love stream boat.It's hot and smell good.

When I enjoy the pickle&fish stream boat with my friend we usually take some "yā bó"（Chinese pinyin）here is the pic of yabo link:http://images.busytrade.com/upload/images/2007-03/11752964716.GIF

When I wirte here that making me mouth water.That's also make me remember my friends in Huanggang city,Hubei province,China.

Here is a post about hot pot is another kind.it's not fish filet and pickled cabbagehot pot
the link url:http://imneverfull.blogspot.com/2008/08/sichuan-hot-pot.html

Thanks for this, Ben. I could not get the images for some reason, but did get to the blog post. Mouth watering.