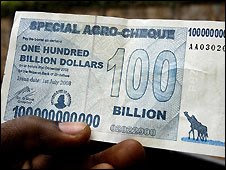 I was struck by this photo from the BBC. I have never seen a 100 billion dollar note before. I note (no pun intended) that it's called a special agro-cheque. Very agro I'm sure.

I was in Shanghai when the power-sharing deal was signed. I watched it live on TV with a feeling of hope, although the body language was not always encouraging.

If you want to get a daily report or reports on Zimbabwe try the Zimbabwe Situation. The Zimbabwe Government's official web site can be found here. It has even been updated - that's not always been the case.

One of the thing that adds a strange and sad Kafka element to the world that Zimbabwe has become is that some of the elements of a civil society still struggle to survive.

Just think. In a couple of years you may be amazed at the 1 billion US dollar note!

Hi David. I can only say, I hope not!