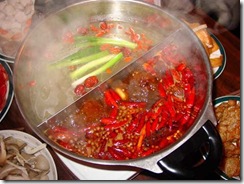 Neil and Ben kindly left some informative and mouth watering comments on my post Personal confusions over Australian food. I did not realise either the variety or long history of steamboat or hotpot. This photo shows the Sichuan Hotpot.

Still on China and food, Yawning Bread had a fascinating post, Cantonese Sydney, that provides a picture of life in one part of Sydney from a visitor perspective. This got me thinking about some of the confusions in my reactions to China including food.

Before going on, one small correction to the history in Yawning Bread's post - the Chinese who came to Australia to mine gold and other mi

nerals including tin did not go just to Victoria. There were, for example, relatively large Chinese populations in the mineral provinces along the New England Tablelands. The photo shows Wing Hing Long & Co letterhead from Tingha, 1927. The big general stores in Tingha, Inverell and Glen Innes were all Chinese owned.

We all use labels - Chinese, Indian, Indonesian, Australian are examples - to describe things. We then attach meanings to those labels, bundles of attributes. This helps us simplify and understand the world, but it can lead to confusions and misunderstandings.

My first intense exposure to Asia came when I was twenty when brother David and I stayed for a week with an Indian family in Singapore, then for another week with a Chinese family in Taiping (Malayasia), before going onto Bangkok where our father was working for the UN. Upon our arrival in Bangkok the first thing we asked for was a steak!

Living in Canberra gave me a different exposure. I added other Chinese dishes, acquiring a taste for Sichuan food. One of my main friendship groups were Asiaphiles,far more knowledgeable than I about Asian - especially Chinese and Vietnamese cooking. Richard was very friendly with the owners of the Golden Phoenix restaurant at Dickson. We used to go there a lot, coming in through the kitchen, trying special things. This remains some of the best Chinese food I have ever eaten.

Yet again, we have the Cantonese flavour, the Cantonese language. I now ate many types of Chinese food, but the rise and fall of Cantonese - something that I tried to imitate, although I am dreadful at tonal languages as I had found when I tried to learn Thai - was central to my mental label "Chinese". 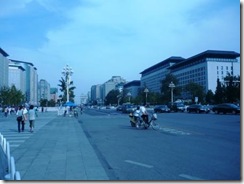 Arriving in China, I found Shanghai a Chinese city, Beijing not. This was partly a matter of cityscape - as indicated by the photo, Beijing is recognisably an imperial capital city along lines that Europeans would find familiar. However, it was also true that the mental label "Chinese" that I had in my mind with its Cantonese flavour was more attuned to Shanghai.

My confusion was compounded by the fact that after eating so much Chinese food of different types over such a long period, the label "Chinese cooking" had become an absolute pot pouri in my mind, a mixture of styles that had come together to be Chinese. I expected this to be the reality, and (of course) it was not.

One of the issues that I have explored from time to time on this blog is the way our perceptions of the world, the labels we use, are affected by our personal history. Here I have pointed to what I see as a fact, that current cultures and attitudes are like an archaeological site, combining things from different stages in the past.

The migrants who came to Australia brought with them all the mental mud-maps formed from their experiences. Upon arrival in a new land with its different experiences, those mud-maps became frozen in time. Still there, still important, yet no longer refreshed.

To say that the world changes is an obvious truism. Yet we do not properly relate this to our own experiences and those of others.

I do not think that I am mis-quoting Yawning Bread if I say that he found Cantonese Sydney somewhat alien, almost a time warp as compared to the modern Mandarin China and Chinese.

In Saturday Morning Musings - ethnicity and change in Australia I noted in passing that Sydney's China Town - the area that Yawning Bread comments on in particular - was only one of Sydney's Chinese areas. Now in Australia we have multiple groups of Chinese ancestry. The differences between those groups are as wide as any other part of the Australian community. The simple label "Chinese" is of no help in identifying and understanding these groups.

More broadly, and I will finish on this point, I think that we Australians are not good at understanding the archaeology, the derivation, of the labels that we use. We need different perspectives to draw them out.

"Chinese" as a label is in some ways analogous to "European". Yes, there are many traditions and cultural things that unite Chinese, not least the writing system which allows communication across dialects which in Europe would be separate languages. Spoken Cantonese and spoken Mandarin are mutually incomprehensible, the difference being analogous to Portuguese and English, say. Shanghainese (or Wu) and Mandarin, on the other hand, are a bit more like Dutch and German, or maybe even Dutch and Flemish. Yet written Chinese can be read by speakers of all of them -- I guess much as number symbols are read across all European languages with different realisations but the same meanings.

In cuisine China has quite a variety, all entitled to be called Chinese, and many Chinese enjoy the variety, which we now see better represented in Australia than it used to be where bastardised Cantonese cooking once ruled. I find it a good rule never to order "sweet and sour" anything, or fried rice... Both are rather down the pecking order in Chinese cuisine.

That's an interesting comparison, Neil, and one that in many ways draws out the difficulties involved with labels.

What does European mean? It may mean someone from Europe. It may refer to culture, as in when I say that Melbourne is a more European city than Sydney. It is also used to mean simply white, another difficult label, equivalent to the caucasian.

The use of the term European has, I think, also shifted meaning in Australia. The way we use the term now is different from sixty years ago.

The thing I found really interesting, the reason why I wrote in the way that I did, is that the China trip drew out the tensions between my mental mud-map of "Chinese" and the varying reality.

Now I already knew some history of the Chinese Empire and of the variety in China. However, the meaning I attached to the label was conditioned by my own experiences in ways that I had not quite realised.

Because of time, I did not explore the archaeology point in the way I had intended to. I have still to work out the best way of doing this. There are ambiguities, lack of clarity.

If we think of the way Australians think now, and still using the label concept, we have hundreds of thousands, perhaps multiple millions (billions), of labels in current use, all linked back to the past.

I was going to use the expatriat case to tease this out. Perhaps still will!

By the way, I am no longer sure that either sweet and sour or fried rice are as Australian as I thought. Sweet and sour would fit with Northern Chinese cooking - itself another label - while fried rice was served in China!

I may be wrong, but I think fried rice is roughly the same as bubble and squeak, a way of using up scraps. Our sweet and sour I thought of as Cantonese, but in a rather crude form here at times in the past. There are many much more interesting Chinese flavours.

That was my impression re fried rice, too, Neil. I still think that its the case. I liked fried rice as a kid and still do, but it is one thing that I have never been able to cook properly.

I have not eaten Australian Cantonese sweet and sour since I was a kid. I wasn't very keen on it then, so we are in complete agreement! I did find the sweet-sour emohasis interesting, though.

This can be true of all great countries. India for instance is a country by colonial accident. There are more states and languages and cuisines than you will find in Europe of even in China. Similarly, Britain has the English, the Scots, the Wales, the Irish, and other minor variations within each sub-sect too! Another country will be Pakistan with many different peoples, as the Indonesians. The old USSR was a classic and they are still to tackle the problem of disintegration successfully.

Ramana, India is a classic case of the problems with labels. Prior to 1949,the term Indian applied to anyone from the sub continent or any body descended from them.Fiji Indians, for example, now quite a large group in Australia because of Fiji's troubles.

With partition, and ignoring the very peculiar English use of the term, we had Pakistanis and then Bangladeshis. So we have to watch the use of the labels - they have different validity depending on the period.

As I said in a comment to Neil,my interest lay in the sometimes unseen ways labels affect us. The broader point you raise also goes back to an earlier conversation, the integration of different groups and the relationship of that to institutional structures.

Thinking about it,and I stand to be corrected by those whose knowledge of Asian history is better than mine, the only global empire that I can think of that really integrated very different peoples over an extended period was the Roman Empire.

Ah, but they ruled with the sword and did not last very long did they? The same with all other empires, including the greatest of them all, the British!

On the other hand, religions have done a better job of it, have they not?

That's an interesting one, Ramana. Visiting Britian for the first time I was struck by the similarities between the inscriptions in St Paul's (British Empire)and Bath (Roman Empire).

It's true that the Roman Empire was established by force, but that's not the end of the story.

The Roman Republic lasted some 500 years, although its territory was limited for much of the period. Depending on the start date you use, the Imperial period lasted from c27BC to 476 in the West, 1453in the East. See http://belshaw.blogspot.com/2008/03/saturday-morning-musings-elizabeth.html for my comments on the east.

In the West there were various successor claims, including the Roman Catholic Church and the Holy Roman Empire. Described as neither holy nor Roman, this finally became the Austro-Hungarian Empire collapsing in 1918.

I think that you can argue that religious traditions have great longevity, but the length of Rome was not to be sneezed at.

When I studied the history of the Roman Empire, we focused on the west and on military and institutional factors. There was less focus on the way the Empire operated as an entity from the viewpoint of the ordinary citizen or subject.