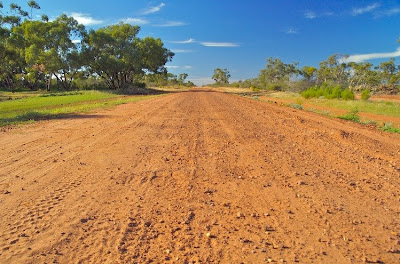 I am writing a new post looking at some of the hints about changing patterns of Australian thought revealed by our recent conversation on In defence of the Lord's Prayer in the Australian Parliament. This will take time. A few random thoughts in the meantime.

This photo by Gordon Smith shows the main road heading towards Hungerford on the NSW/Queensland border.

Traditionally Australians, especially country Australians, spend a lot of time on the road. We have to - the distances are so large.

My memory is littered with the roads that I drove on a regular basis. Particular curves, the way the road unfolded in front of me, the changes to the country, the little towns and regular stop points.

This can be real distance driving. In one thirteen week period I drove 52,000 miles.

My daughters' old school has recently abolished muck-up day, to the fury of both girls (and their father!), on the apparent grounds of risk. Yesterday, youngest SMS'd us to say what a buzz she got from sky diving on her first independent trip in New Zealand. Bungie jumping is next.

At sixteen, I hitch-hiked on my own through Tasmania. I ran out of money and did a three day perish with no food. At twenty, our family along with another drove from Bangkok to Seam Reap in Cambodia. We drove against the advice of the local CIA Station Chief - the Vietnam war was raging - in cars with UN plates and UN flags. We saw Angkor Wat and many other temples just before the Khmer Rouge came to power.

My step-grandmother was a UN worker in Korea and China at the end of the Second World War. She was there during the Communist Revolution, the invasion of Korea. My aunt was a Red Cross nurse in Malaya during the Emergency. Driving alone in unarmed vehicles, her job was to bring medical support to the kampongs.

In Beijing in 2008, our hosts were organised for us by Joan Rowlands. Her book, Voluntary Exiles, is the story of missionary families from Madagascar to North China at the time of Japanese invasion. One of those who were in the book featured as a main protagonist in Chariots of Fire, the Scottish boy who refused to run at the Paris Olympics because his race was on a Sunday.

One cousin, an anthropologist, lived with local families in New Guinea while writing his PhD. His brother, also an anthropologist, focused on Central America and the Caribbean and is now best know for his role in re-introducing wolves to North America.

My grandfather and mother visited Europe on an official mission in 1936. Convinced that war was inevitable, he returned to campaign to re-build Australia's industrial capability. Combining with Mick Bruxner, they put NSW onto something approaching a war footing while the national Government was still temporising.

My point with these apparently disconnected meanderings is that I sometimes find modern Australia a much diminished place.

I have done some stupid things in my time. In fact, I have been lucky to survive and am still embarrassed by things in my past. I am also naturally cautious, conformist and even a bit of a coward. I am also stubborn when it comes to certain things.

A number of years ago, a swimmer got into trouble in a rip at Tuross on the South Coast. He was calling for help. I looked around, and the small number of people on the beach were just watching.

I am not a strong surf swimmer and so I hesitated. Finally I went in. As it happened, we sort of rescued ourselves in combination.

I still remember being in the water. There was a pine tree on the headlands. It went backwards and forwards as I struggled to get back to the beach. I was getting tired, and began to wonder if I should simply give up.

I take pride in this episode because I overcame my fear. There was another that I was not so proud of.

I had been staying in Kings Cross and was on my way to an important meeting. A policeman was chasing someone. The man kept hitting the policeman and then running on. The young officer called for help.

I was in a hurry, and did not know what to do. If I stopped I would miss my meeting, something that was important to my company. I was also worried about losing my briefcase with its papers. Finally, and to my eternal regret, I went on.

The things that I take most pride in in my life are those where I have somehow managed to hold the line against pressure to conform or against my own fear.

My willingness to reject the school cadet corp even if it meant my expulsion. My stand as a conscientious objector during the Vietnam War. My willingness to stand and fight in a Country Party pre-selection campaign where my Vietnam views had become a central element in the campaign. My support for a staff member against John Stone as acting head of Treasury. My willingness to go into the surf at Tuross.

The things that I take least pride in are my failures, the cases where I have broken my own principles.

I cannot give my girls the personal freedoms I had. This is no longer possible in modern Australia. I can try to give them the freedom to make their own decisions, to try new things.

One area in which modern Australia has advanced is in the relationships between parents and kids This is a whole new topic in its own right, one that I do not want to debate. In simple terms, a closeness is now possible in a way that was nor possible in a more formalised past.

The Road Stories continue. Their form has changed.

My compliments on a post that, I bet, has come straight from the heart. It is beautiful. I enjoyed reading it.

Thank you Ramana. As you say, it did focus on personal feelings and experience. I am never sure with purely personal posts, so its nice to know that someone enjoyed it.