Sunday Essay - the myths and realities of Northern Development

Neil's shared items drew me to a post by Bob Gosford on his the Northern Myth blog. This dealt with the prospects for development in tropical Australia based on water. Bob is something of a sceptic, quoting from Bruce Davidson’s 1965 book, The Northern Myth.

Bob was looking for comments from people who actually knew something about the topic from an on-ground perspective. I do not. However, I do remember clearly the earlier debates on Northern Development.

By way of background especially for international readers, there has been a long fascination with the prospects for development in Northern Australia. This interest was heightened by the Second World War, leading to strong pushes to subsidise or fund agricultural development in the North, including especially the Ord River Scheme in the Kimberley region of WA.

Preliminary work on the Ord River Irrigation Area (ORIA) Project had begun in 1941 when the WA Government established a small experimental farm. In 1945 the Kimberley Research Station was established on Ivanhoe Plain, as a joint Commonwealth/State venture.

By 1958 the WA Government was convinced of the viability of an irrigation scheme and the initial development was completed in 1963 at a cost of around $20 million, of which the Commonwealth contributed $12 million. By 1966, 31 farms irrigated from the Diversion Dam had been allocated.

Construction of the Ord River Dam followed to provide the major storage reservoir called Lake Argyle at a cost of $22 million. This was officially opened in June 1972.

Bruce Davidson wrote his book as a debunker in the middle of the Ord River debate. This was a hot political topic, with strong opposition to the scheme especially from the Commonwealth Treasury. This argued on cost/benefit grounds that the scheme could never be viable.

Interest then died down, but has recently re-surfaced in a large way because of the climate change debate. Proponents of Northern development argue, among other things, that agriculture must move north to take advantage of Northern Australia's water resources. This led to the establishment by the Howard Government of a Northern Australia Land and Water Taskforce. The map below shows the area covered by the Task Force. 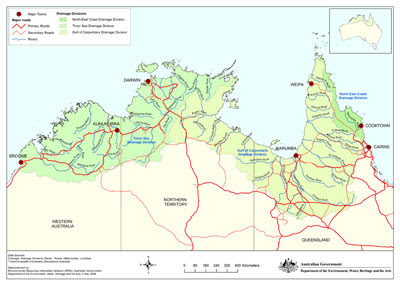 When I first looked at Northern Development all those years ago as part of the school geography course, there were clear problems in terms of seasonality of rainfall and of sometimes poor soil. But by far the most obvious problems were small local markets, lack of infrastructure and high transport costs.

Given the renewed interest in, even obsession with, Northern Development, I wondered just how much things had changed. The answer is I don't know. I am in fact frustrated by my own lack of knowledge. Here I found the Task Force web site itself frustrating - the submissions and so far released analysis is fragmented, lacking in the detail required to give me the information I need.

Given this, what can we say?

The first thing brought out clearly by the submissions, and this has always been a problem with discussions about Northern Development, is the variation across Tropical Australia. It's actually hard to generalise - analysis needs to be carried out at regional level. Mind you, this should come as no surprise, since the need for regional level analysis to properly inform public policy discussions is, after all, one of my constant themes.

The second thing is the bias in the submissions towards water as such. There appears to be very limited economic and geographical analysis so far, little about the changes that have taken place since the previous debate. These are substantial.

To begin with, there has been substantial economic and population growth in Tropical Australia, far more in fact than was predicted even forty years ago. Mining, tourism and Government (especially Defence related) have all grown substantially. As an example, the rise of tourism and mining has been transforming the Kimberley Region. Ignoring everything else, this should have encouraged horticultural production just to serve the local market.

Broad acre farming is still important, but the overall pattern is far more varied. Further, the huge rise in irrigation based production has changed industry knowledge as well as its dynamics.

I make these points because I think that there is now both more knowledge of irrigated and tropical agriculture and a better fit with Australian consumption patterns. So this should provide a better base for agricultural expansion than existed when Dr Davidson wrote his book.

There have been two further changes as well. The first, more immediate, change is the rise of Asia. I would have expected this to increase markets for Northern Australian products. The second, longer term development, is the rise in the importance of bio-fuels.

This is all working from first principles. However, if I am right then I think that the world is very different from that of 1965.

I have not had time to validate my conclusions beyond a quick, superficial, scan. This is broadly supportive - a quick scan of the relevant section of the NT Department of Primary Industry, Fisheries and Mines web site shows at least some of the features that I am talking about.

None of this means that Bob Gosford is wrong to be sceptical. Quite the contrary. It is one thing to suggest that things may be better than they were, quite another to suggest that the type of quantum leap implied by the new Northern Development proponents is either desirable or possible.

The short answer on the second is that I just do not know. However, I am sceptical.

In all this, though, there was one thing during the week that pulled me up. Looking at the ABS population projections, I was astonished by the low projections for the future NT population - from memory it was about 460,000.

These projections are based on a series of current assumptions. I don't believe them. There comes a point in change processes where previous developments force a quantum shift. While I am sceptical about the current Northern Development hype, I think that we are at this shift point. But that's a story for another post.

Since I prepared this post, the Australian Bureau of Statistics has released new agricultural state profile for the Northern Territory.

At 30 June 2007, there were an estimated 640 agricultural businesses in the Northern Territory. This is not a large number.

In a recent post, Bob Gosford has returned to the Northern Myth theme in the first of a series of irregular posts. The link is here.