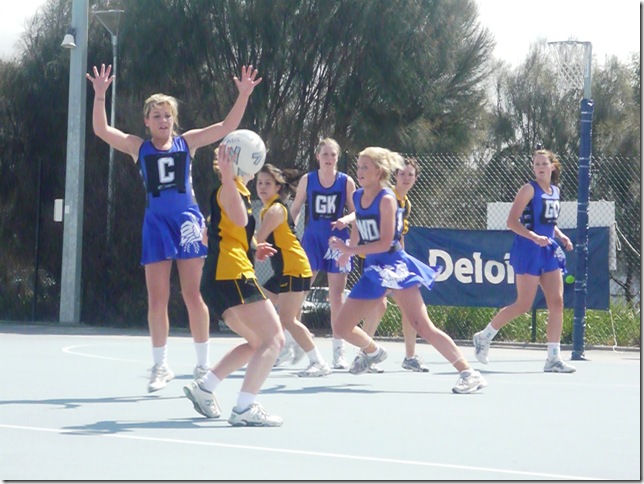 Hasty correction: I showed this post to Helen who pointed out two errors. The team is the women's team, not the mixed one (ouch!). It follows that the girl with the ball is not Helen (double ouch, damn!), although she does play centre from time to time. I have let the photo and story stand with corrections despite my blushes because I still think it illustrates my points.

This photo is from the recent university games in Melbourne, eldest (incorrect) with the ball. As centre in this case, Helen's (the centre's) task is to get the ball clear to one of her players so that they can shoot. Centres are not allowed into the forward part of the court.

It's quite cerebral, something that Helen enjoys. The rival centre has already jumped to try to block a shot. You can see Helen (the centre) swivelling to to try and find a clear path. The UNSW player in the centre left is moving to the left followed by the rival wing defence. Helen may shoot to the left, or straight forward since the wing defence's left move is opening up a path to the UNSW player at the back.

Netball is Australia's largest women's sport.In this case, although no boys are in the photo, the team is mixed sex, adding to the enjoyment. These were Helen's first university games and she had a fantastic time.

This post is in fact about the usual end month navel gazing. However, I thought that I would throw something in for variety.

Total visitor numbers on my various blogs to end October follow. I came closer than expected to cracking the 100,000 mark and will certainly do so in the next two weeks.

Looking at patterns, the table below sets out total visitor numbers by month. October was a record month. I have clearly reversed the mid year slump associated with low posting.

Total page views follow. These are not directly comparable with visitor numbers because they come from a different system. However, they do indicate trends.

This was another heavy posting month during which I made further progress in reducing the posting backlog. However, the plans I set at the end of the last month for the development of my Cinderella blogs were swept away by the global financial crisis.

Still, I shouldn't complain too much. It is a long while since I have written so many economics posts, and it's certainly refreshed my economics! It's also had the side effect of energising the Management Perspectives blog, previously something of a Cinderella in its own right.

Yes, I know that I have too many blogs. My continuing rationalisation is that each serves a different purpose, forcing me to write across my areas of interest.

There is obviously a quality/quantity issue in writing as many posts as I do, as well as a time issue. What I do find, however, is that the blogs have become my main store of my own intellectual capital, replacing material that I used to write but then store on the hard drive.

Given my somewhat peculiar interests, I find this interesting in its own right. With cloud computing much in discussion just at present, I seem to have morphed into a cloud computing person. Good to know that am still up with the trends!

Congratulations to you.
I see that this blog's birthday were on March 19 (according to your first post).