The following map shows the average number of days across Australia recording more than 1mm of rain. While the colouring may be a little hard to read, I thought that showed one aspect of Australia's climate in a rather useful way. 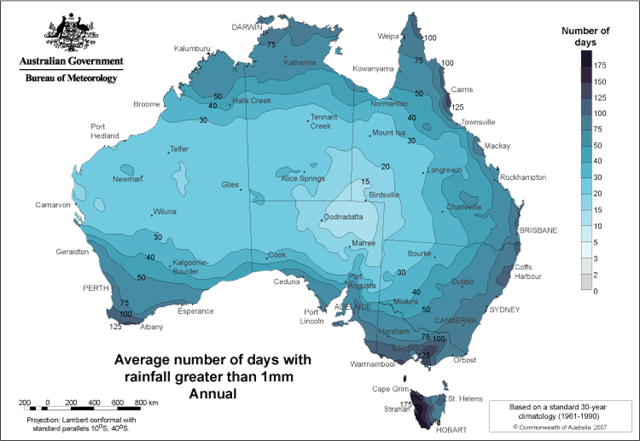 Australia is a dry continent, the driest after Antarctica. If you look at the map, you can see how rainfall increases in rings from the very dry centre of the continent, with the wetter areas forming a semicircle towards the coast in the north, east and south.

During droughts, the pale blue area expands, the darker blue areas contract. As you might expect given Australia's size, the country is affected by different weather systems.

The map also suggests why Australians may be so sport mad, still so outdoors. A fair bit of space with lots of sunshine encourages outdoors activities.

The map tells us a lot more as well. For that reason, I will repeat it with other material from time to time to help discussion on different aspects of Australia.

Lexcen kindly pointed me to this article in The Age (Melbourne) by Kenneth Davidson, Water waste of our dam money. The article bears directly upon some of the points I made in Saturday Morning Musings - why environmentalists (and other enthusiasts) are sometimes bad for the planet.

At this point I have not attempted a critical evaluation of Mr Davidson's views. However, they do point to the importance of balance and evidence in making assessments about perceived problems in regard to water supply.

so, I think our climate today is get much of changing. Is it similar with my country. yesterday we can predict what month of rainy season, and the time of dry season. but now, I get unsteady condition of weather, which in one day I get very hot temperature, and really cold at night, and sometimes the rain falls unpredictable.
And now Australia spend many of days with rain. May be is it because of the effect of global warming and climate change

This was a helpful comment, Niar. I simply do not know enough about Indonesia to be able to comment on climate there. But if Australia is experiencing new climatic variations, so will Indonesia.

I think that you are right about global climatic change,although I have been sceptical about some of the arguments. Can you spell out for me a little more just how Indonesia's climate might have changed?

I tend to think of Indonesia as just hot and wet.

Check out this article Jim http://business.theage.com.au/business/water-waste-of-our-dam-money-20081116-685h.html

Thank you Lexcen. I read with fascination. I do not know whether the facts are correct, but on the surface it seems to prevent a powerful case.