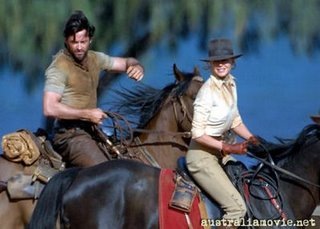 I am sitting here frustrated. Like many Australians, our internet connection allows for a certain monthly download. Exceed that, and the system slows to a crawl.

This month we ran over our limit early. My fault. I live streamed NZ TV to watch the election. Now the system's crawl is simply awful. Add to this the slowness on this box because all the software alterations have chewed up memory, and I have a real problem. I have just spent forty minutes trying to download a few emails.

I am writing this post on Livewriter. Hopefully I will be able to load it. However, I will not be able to provide the links that I wanted.

There were two major Australian film events this week.

The first was the highly promoted ABC production on the Howard Years. I will write a critical evaluation of the content later. However, just focusing on the filmic aspects, this was gripping TV for anybody with a little background. While I do not think that anyone in Australia can yet do a West Wing, an often re-watched almost cult classic in this household, the Howard Years shows how far local production has come.

The second event was the release of Baz Lurmann's Australia. This release, one I had been waiting for and had written on, is far more problematic. To my mind, the reasons for this go to the heart of some of the problems that Australia, and its film industry, face.

Just to set a context, the share of the local box office held by locally produced films has dropped to around 5 per cent. Australians are staying away in droves. Yet when we come to look at TV ratings, Australian made product still holds its ratings on free to air. However, this household rarely watches it, although I might like to.

Lurhmann's film is a blockbuster - it cost $A120 million to produce - set in Northern Australia. The film centres on an English aristocrat in the 1930s, played by Nicole Kidman, who comes to northern Australia to sell a cattle property the size of Belgium. After an epic journey across the country with a rough-hewn drover, Hugh Jackman, they are caught in the bombing of Darwin during World War II.

At this level, the film has everything. It is by all accounts visually quite striking. Yet I was worried about its local appeal because it seemed to be playing to images that had, to my mind wrongly, receded into our past. When I looked at my own now city family I found that there was very little interest in the film, I think because it dealt with images that are now alien.

Then listening to the discussion about the film, I suddenly found that I was reluctant to go as well for very different reasons. I thought that this was a story, yet somehow it becomes a film in part about the stolen generations, Aboriginal children removed from their parents, and attitudes to race.

Don't get me wrong. These are important issues. Yet when they start being presented as a key element, the story ceases to be a story and becomes instead a politically correct statement.

Media people constantly talk about the demographics, the audience to which a production or a network appeals. When we look at demographics in this sense, Australia has always been divided into multiple audiences based not just on things such as age and education, but importantly too on geography. Melbourne viewers, as an example, often do not like the same things as Sydney viewers.

If you look at successful Australian films or TV productions, you find that they have at least one of, more often a combination of, two things.

Number one is a strong story line. The most successful productions in international terms are those that present what is in some ways a universal story. Baz Lurmann's early film Strictly Ballroom is an example. This relatively low budget has achieved continued success because it is a good story. The Australian elements are there, but they do not intrude.

Number two is that they play to specific popular local images, both seriously and in a comedic fashion. In dollar terms, Crocodile Dundee remains (I think) the highest grossing specifically Australian film. It was a huge success locally because it appealed to Australians images of themselves. It was a massive success internationally because it was visually funny, appealed to international images of Australia and also presented a universal story.

For a number of reasons, over the last thirty years we have constantly hacked away at many traditional Australian images. This has happened at a time when the Australian population itself has become more diverse. As a consequence, the local audience has fragmented.

Many Australians will not go to Australia because they perceive it as playing to past images that have been persistently and consistently attacked as no longer relevant or, worse, wrong. Now others who might be attracted to those past images may not go because they perceive it as in some ways politically correct. All this provides an over-burden that can make it hard for a film to survive.

We saw a similar problem with Ten Canoes. This was an interesting film that deserved a better box office outcome. Looking at it just as a film, while it was not a cinematic masterpiece it was also a fascinating entry point into a different world. Yet once it became embroiled in the discussion about indigenous issues, once it was presented as something that Australians should attend, the point was lost.

I have just been reading at youngest's suggestion a Terry Pratchett Diskworld novel that in fact centres on Australia. This novel is full of local allusions including drop bears, something that comes from Bundaberg Rum ads.

Youngest loves this book because of its localisms, something that I enjoy too. Youngest also likes Crocodile Dundee. She is, in fact, a rampant Australian nationalist, although she might not like me saying so. Yet she has no desire to go to Australia because, I think, she sees it in some ways as old fashioned, discredited.

There is to my mind an awful irony here. The core culture is very powerful and goes on, but has become disconnected from its past. Our cultural elites who have created the disconnect now find themselves in a strange desert, one where they seem to have won so many things. yet struggle to understand why the things that they stand for are not better accepted.

I was mulling this post over because I wasn't quite sure that I had it right. I did draw a comment from Neil on his Google Reader series. The comment is repeated in full below because the GR series posts are deleted after a period.

"Much here I agree with, some I don't. After all, "Rabbit Proof Fence" was a very successful movie commercially as well as artistically. I think one problem is that Baz Luhrmann's vulgarity has betrayed him rather in this one. I liked "Strictly Ballroom" and "Moulin Rouge" as musical and visual entertainments, have little time really for his "Romeo and Juliet" ("West Side Story" did it better) and fear this one has a heavy dose of "Thorn Birds" about it -- one of the most ridiculous novels I have ever read, albeit popular. Not that I have seen "Australia" yet. I am glad to see the Darwin air raids highlighted -- an episode much minimised at the time. Otherwise he seems to have a bit of a Chips Rafferty complex, from what I gather... Maybe I'll do my own post, but I'd rather see the movie first. Like Jim I hope it does the Oz industry good.”

Neil's comment raises a number of issues, some of which link to personal taste, as most of these things do in some way. To provide a basis for later discussion, I thought that should add some strictly factual material.

Neil referred to Rabbit Proof Fence (2002) as a commercial as well as artistic success. In fact, according to Mojo the global box office for this film was $US16.2 million. This means that this film, while one of the best known Australian movies because of its subject matter (the stolen generation) as well as its quality, was at best a modest commercial success.

Certainly it was a commercial success by comparison with recent Australian films. I am not sure that any Australian film made in the last two years has got to $US10 million box office, let alone $US16 million. Ten Canoes, a movie that really deserved a better fate and might have achieved it with different promotion, achieved a global box office according to Mojo of $US3.4 million.

Now compare this with Australian movies that have been commercially succesful.

This is by no means a full list and excludes Australian made movies that are not identifiedly Australian like Babe.

To really make my case, I would have to go back and check every film in detail. However, my impression is that over the last fifteen years, and with a few exceptions, the Australian film industry has progressively lost its local audience without really adding international reach.

It no longer makes films that Australians want to watch to the point that to call a film Australian made is now a kiss of death. Perhaps the most damning criticism that I have heard is that the industry now really makes art house films and is a failure at that.

Contrast this to TV where Australian content is still in demand. TV has to make product that people want. There is almost no correlation between Australian TV and Australian film in terms of content.

The Yanks will flock to it, Jim. After all - Oprah has endorsed it!

I really liked this comment, Mike. A welcome breath of humour on a topic that I am in danger of becoming far too serious about!

I don't like many Australian movies because many are depressing and miserable. No, I don't want some Hollywood ending, but I don't really enjoy watching terrible stories of drug addiction, mental illness, domestic violence etc. It just really gets me down.

There was also a stage where Australian films were seriously overdoing the "quirky" thing too.

Just in terms of my own reactions, LE, I would agree on both points. It would be interesting to see, it may have been done, a sociological study of the Australian film industry. Film is entertainment. My feeling is that the industry has become increasingly divorced from the rest of the country.