Sunday Essay - the strange case of Australia and New Zealand 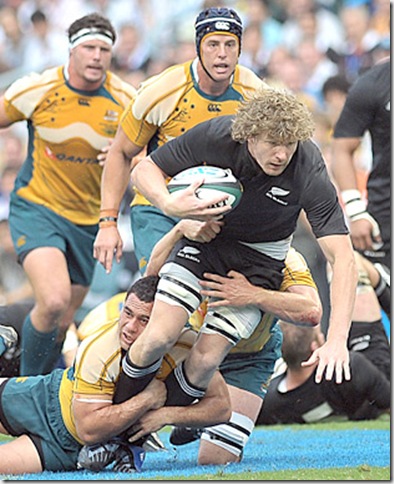 Last night Australia and New Zealand played one of their Rugby Union stoushes in Hong Kong in front of a mixed crowd of Kiwis and Aussies as well as probably somewhat bemused locals.

Baa baa black sheep
have you got the ball?
No sir, no sir
the Aussies have it all
Clare SMS

The Hong Kong game began well for Australia with a quick trie. Clare, watching from Picton in New Zealand sent a triumphant SMS. In fact, she rarely watches Rugby, but travelling in New Zealand she had no choice for there the game is a national passion.

With the assistance of some very dubious decisions by the referee, the game was being played under "experimental" rules, New Zealand kept in touch.

I won't even attempt to explain the Rugby Union approach to experimental rules, I don't properly understand it myself, except to note that it is both very British and very modern. Very British because it appears to involve a degree of eccentricity. Very modern because in the now commercial game, they bring in experimental rules to fix something, then test them in practice like a modern management pilot.

For someone like me who played the game all those years ago, it is in fact very confusing. There is a fascinating dynamic here. These are generally big men who can also run very fast, getting bigger and faster through a sort of process of Darwinian self-selection. Each time they change the rules, players and coaches respond by changing play to get best results under the new rules. In turn, this leads to more rule changes.

In this case, it appears that NZ had the rules down pat, Australia did not. With penalties running strongly in their favour, New Zealand kept in the game, finally winning 19-14.

As Union players from the two countries headed north for their European tours, several thousand miles further south in another variant of the Rugby Game, the Rugby League World cup, a relieved New Zealand broke their d 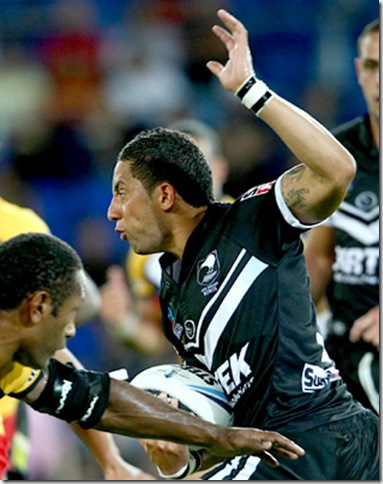 This victory was very important to the Kiwis. Rugby League is a PNG national game, and the PNG side had already given England a bad scare. New Zealand had to win to keep alive their chances of meeting Australia in the finals.

The differences between the two Rugby codes are also difficult to explain simply to outsiders, in part because they date back to the industrial age and the differences built into the English class system. In a very class-laden comment, someone once described Rugby Union as a thugs game played by gentlemen, League as a gentleman's game played by thugs. Both games are now fully professional sports, both are played at a very high level, but it remains true in Australia that Union still draws heavily from private schools (here for example), League from the public school system.

If all this is not enough, in the last week New Zealand defeated Australia in 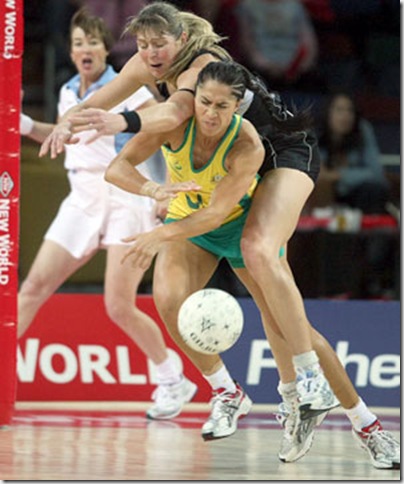 Netball is the biggest women's sport in the two countries, and (as the photograph of an earlier test shows) the rivalry is intense. Netball, by the way, is meant to be a non-contact sport!

It will be clear from these three examples that both Australia and New Zealand are somewhat sports mad, and also quite obsessive about beating each other.

I am a little odd here, because with a father born in New Zealand and with New Zealand family, I retain the right to cheer for whichever country I choose at the time. In SMSing us from Picton, youngest was in fact having a go at her father, thinking I might be cheering for the All-Blacks. In fact, I always cheer for the Wallabies in the Union, but for New Zealand in the League.

To further complicate matters, eldest and I support Canberra in the Super-14 (the Southern Hemisphere tri-nation club competition), but then go for Christchurch where Dad was born. This is a good stir (to use an Australian phrase) because Sydneysiders get upset because we don't support the Tahs, the Sydney team.

The complexities in sport and sporting rivalries are only one dimension of the complicated dynamic between the two countries.

A number of years ago, the Australian Government chose to dismantle a variety of arrangements that had effectively given residents of other dominions in the Commonwealth a degree of preference in Australia. This was done partly on nationalistic grounds, partly on the grounds of non-discrimination between national groups. The effects were quite profound, because (among other things) they affected the status of more than a million people living in Australia.

The changes were deeply resented by many Australians, but accepted up to the point that the Government proposed alterations to the status of New Zealanders, replacing the previous free-entry for New Zealanders into Australia with proposed passport and entry controls.

This was a step too far and the Government was forced to back-off. Regardless of the arguments for non-discrimination, New Zealand was different and was to be treated so. This remains true today.

Australia and New Zealand are very different and in so many ways.

The physical landscape is one dynamic. Those who have seen Lord of the Rings will know that New Zealand is one of the most physically beautiful countries in the world.

Unlike the sometimes rugged but rounded and ancient Australian red and olive-gray landscape, New Zealand as part of the Asian rim of fire is a place where the sharp edges of high young fold mountains with their white and gray contrast with the brown of tussock grass and the green of the beech forests or the the North Island farm lands.

New Zealanders still have a closeness to their land that modern urban Australians have largely lost. In Australia, bush walking is very much a minority activity. In New Zealand, tramping is still a national past time. The average New Zealander has more, and a more intense, interaction with country than most Australian will ever know.

New Zealand has turned this to real advantage. To many young Australians, Clare is a current example, New Zealand is the land of adventure sports.

Constrained at home in a world of growing regulations, controls and social restrictions, young Australians flock to New Zealand to experience adventure in what is, in fact, a very safe environment. There are dangers in the New Zealand bush and mountains, a number of Australians do die each year, but these are known dangers that can be managed.

A second difference lies in population.

Australia is five times New Zealand's size in population and the economy. This gives rise to a dynamic that would be familiar to Canadians, a sometimes resentment of a bigger neighbour that ignores or condescends to them, that attracts New Zealand migrants to the detriment of the home country.

This effect should not be understated. On my visits to New Zealand I found a marked change in attitudes during the 1970s, the development of a hard edged resentment driven by Australia's greater opportunities, by the way that Australians and the Australian Government appeared to be trampling on New Zealand. I think that this has died down somewhat, but it is still there.

There are also differences in language and politics.

The rise of the distinctive New Zealand English dialect with its thuck vowels is quite recent. It was not really there when I went to New Zealand as a child or young adult. Then, suddenly, over a few trips spanning perhaps ten years, it became obvious, replacing the previous more English pronunciation.

In political terms, New Zealand is both more conservative and more left wing than Australia. In particular, and notwithstanding the revolution in public administration associated with the development of the New Zealand model, New Zealand retains, I think, a more collectivist ethos than Australia.

I doubt that the provision in the Australian constitution that allows New Zealand to join the Federation will ever be exercised nor in fact, wearing my Kiwi hat, would I want to see it exercised. Yet shared history and shared people - the constant exchange of people between the two countries - create enduring bonds.

In simple terms, while sometimes fighting like Kilkenny cats, Australians and New Zealanders understand each other. Put them together in another country, and they tend to gravitate to each other because of common understandings, a shared sense of humour.

I cannot see this breaking down. The only risk that I see lies on the Australian side, in the sometimes arrogance that comes both from size and the Australian tendency to see itself as necessarily right. Sometimes a little humility and self-awareness is a good thing.

In the meantime, may the sporting sibling rivalry continue to the mutual enjoyment of both sides.

It is disappointing that you have omitted another great sports rivalry, cricket. A series between the two countries bring out the best in both of them.