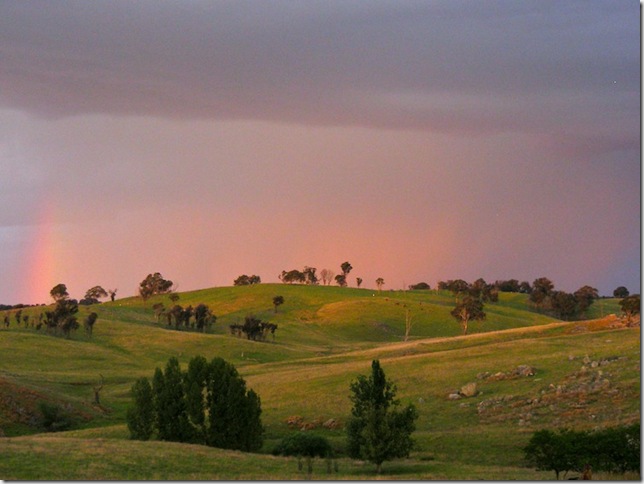 This rather wonderful photo from Gordon Smith is pretty typical of the countryside I grew up in.

The late afternoons were often one of my favourite times of day because of the light. Even in drought times the colour changed and the country softened, angles blurring. Marvelous, really.

Reading some of the commentary on the economic downturn is a bit like taking part in an Armageddon movie. The first bits of the asteroid are hitting the earth, getting bigger all the time while we wait for the main strike.

I am still working my way through the issues, most recently in Scoping the global downturn - a few numbers. In this case I decided to start by looking at the share of global gross domestic product held by the twenty largest economies to see what this told me. I will leave it to those who are interested to read the full post, but a few comments just for a heads-up.

Further, as a very rough back-of-envelope calculation, countries representing something over 55 per cent of the world economy are already in or are about to enter recession. China, even China or India in combination, cannot offset this. They are just not big enough. As a rough rule of thumb, the Chinese economy has to grow by an extra four per cent to offset a one per cent decline in US GDP.

I am more pessimistic about the short term outlook than I was. But for reasons set out in the post, I have not altered my longer term outlook. Nor, for that matter, have I changed my view on the Australian outlook.

I have been doing a little checking and updating on past posts.

In Sunday Essay - the myths and realities of Northern Development I have added the latest statistical data on Northern Territory agricultural production, as well as a link to Bob Gosford's latest post on the subject, The Northern Myth - Chapter 1.

I have also added a postscript to Bridging the gap between indigenous Australia and the broader community - a methodological note pointing to new new research using census data to compare indigenous conditions in Maningrida, Dubbo and Perth with each other and the non-indigenous community in those communities. I will try to do another post pointing to some of the conclusions that I drew from the analysis, given my own perspective. In the meantime, the paper is worth a read for those with an interest in the topic.

Looking at my rolling blog publishing plan, I now have a backlog of some twelve posts that I wanted to write on this blog alone. However, I also want to keep updating past posts, while pointing to interesting writing done by others.

I suppose that this is a long-winded way of saying that posts here are likely to be a bit bitsy over the next week.