The Howard Years - Indonesia and Australia

The second episode last night of the ABC TV documentary, the Howard Years, was again fascinating viewing. Those who are interested can find the program site here.

You can watch past screened episodes, read the transcripts, watch extended interviews and access some resource material including a detailed and very useful chronology of the Howard years.

To some degree, reactions to the program depend on where you stand or stood on issues. Regardless of position, this is remarkably ambitious TV in terms of its scope.

Last night's episode drew out some of the complexities in the Indonesian-Australian relationship. I was interested in this because I have been jotting down some thoughts on a possible series of posts on Australia and Indonesia.

The program showed just how great the risk was of some form of armed conflict between the two neighbours over East Timor, an issue that engaged popular opinion on both sides. The chance of error leading to conflict was considerable.

Knowledge in Australia, and probably Indonesia too, about the complex history of the relationship i 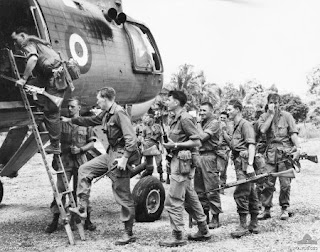 Few Australians know, for example, about Confrontation, the undeclared war between Indonesia and Malaysia during which a number of Australian soldiers were killed on active service as part of Commonwealth forces. The photo shows Australian troops boarding a Belevedere helicopter on their way to a mission.

I think this lack of knowledge is a pity, because the future of the Indonesian-Australian relationship is a key strategic issue, especially for Australia. Both sides, and especially Australians, need to understand the way that relationship has eveolved.

The Asian financial crisis was one of the challenges faced by the Howard Government in its first term. Australia's role in extending over $4 billion in financial support to its Asian neighbours including Indonesia was important in helping stabilise the situation.

I do not think that this crisis was really discussed in the program. I suspect that it would have been had production occured now. You see, in checking the background I found that I had forgotten a few key facts about the crisis.

In July this year, some six weeks before the global financial crisis, the Governor of the Australian Reserve Bank delivered a speech looking back at the Asian financial crisis. Reading the speech and then checking it against other material (here for example) reminded me just how bad the crisis had been. I was also struck by the similarities to the present crisis. While this is being wise in retrospect, there were lessons here that we could have learned.

Australia's willingness to help its Asian neighbours was important in building bridges. Timor tore those bridges down so far as Indonesia was concerned. 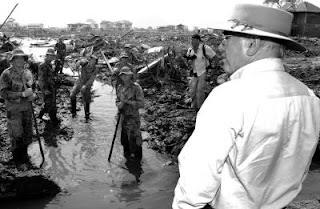 In saying this, I am not making any comments about the issues themselves, simply the results. I think that it took our wholehearted involvement in Aceh following the Tsunami to largely complete the rebuilding process. Here the photo shows Prime Minister Howard talking to Australian troops helping in Tsunami relief.

The announcement at APEC by Prime Minister Kevin Rudd and Indonesian President Susilo Yudhoyono that Australia will spend $67 million over the next five years to establish a joint disaster coordination centre in Indonesia is an example of engagement. It is also an example of the changing nature of the relationship.

Early Australian aid to Indonesia was driven in part by strategic considerations, but it was also set in an aid context. Increasingly, our support is driven by the need to achieve shared benefits.

We offer the things that we can provide such as money and expertise, but we now also look for gains and contributions on the Indonesian side. While still early days, the relationship is moving to a shared benefits arrangement.

To my mind, this is a much healthier relationship. Indonesia and Australia must cooperate. We have no choice. Here I think that the scope for cooperation is enormous. I also think that this can only grow with time.

Habibie did catch Australia off-guard when, in January 1999, brandishing Howard's letter, he said East Timor would be given a choice between independence and autonomy. Before this, Habibie had been promoting "special status" for East Timor code for autonomy within Indonesia.
----------------
adolfo
SEO

That's absolutely right, Adolpho, and it comes through in the TV program.

I absolutely agree with your last point. It's not just that we should cooperate as neighbouring countries, although that's important. I actually think that the relationship is critical to both if we are to achieve eaxch countries' objectives.

Change is rarely if ever voluntarily
accepted. If I read you correctly, change is being thrust on a lot of us at a pace never been seen before. Old foes are becoming friendly, poor are getting richer, rich are getting poorer and to top it all, the climate is also changing very rapidly.

I suspect that events are overtaking us.

I am not sure, Ramana,that the pace of change is in fact any faster. Modern media means that we are simply more aware of it.

One of the things that I am trying to achieve in my writing is to get us all to slow down a bit, to think longer term. My feeling is that we now have official systems that are constantly trying to respond to immediate events. This creates instability.

We cannot control change. We can only control our reactions to change. If we always respond just to the immediate, events will always overtake us.

I agree with you, Indonesia and Australia must cooperate. Upheavals that occurred in Indonesia or Australia, at least will bring an effect for both, because we are neighbors.

It's important to build understanding between both countries. Although have different culture but geographically Indonesia and Australia have the same interests and responsibility to keep their regional stability.

I think other countries out there also have small disputes in the past. The important matter is the spirit of cooperation and build better future together not extinguished.

Let it be the business of government and the people remain as usual.

I thought that you put that well, Tikno.