The photo is from Beijing and shows me trying - very badly, I might add - a tai chi exercise. Some of the locals could not help smiling at this somewhat stooped, tall and ungainly visitor. 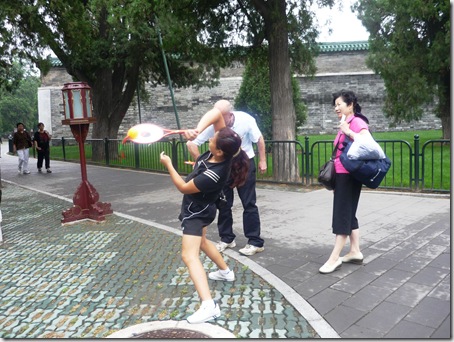 ew things, finding out about new things. When I arrive in a new place, the first thing I generally do is to buy a local newspaper. My family laughs at me some times because of the way I seem to localise. I can't help it. It's both a matter of personality and of training.

Once I have read the paper, it usually gives me something to talk about or ask questions about. This adds to my knowledge, so I can ask further questions.

I also try to watch the way people behave, interact. Sometimes people do laugh at me because I might look very silly when I try something, but you will be surprised at how often it leads people to open up.

Mind you, there are some things I cannot do. I cannot haggle properly, something that can be a very real weakness. I am too busy listening to the patter, watching the whole thing. 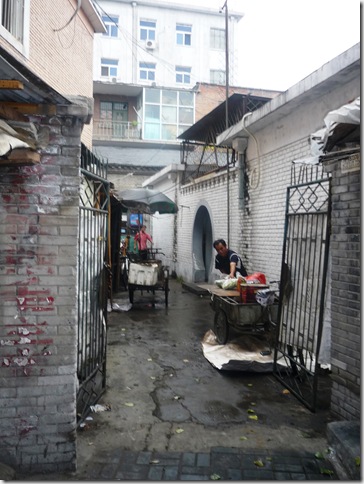 "You come with me to see warehouse" led down this fascinating Beijing back ally. Having done this, it becomes very hard to refuse to buy anything!

To the Chinese, bargaining is a very stylised sport, but one that I would have to consciously learn how to do. It's on my list!

Part of the reason for this introduction, beyond the indulgence of talking about myself, is to make the point that the on-line media can never replace the print version when it comes to getting a context.

It's partly a matter of content - on-line editions just have less content. But its more the paper as a whole including ads and story snippets. These may be small, simple details of local life, but can also be substantial.

It took me less that twenty four hours in Shanghai, for example, to realise that key elements of Australian economic reporting on China were incorrect, that the high prices being charged for our coal and iron-ore were unsustainable. The clue here were newspaper reports on the adverse flow-on effects of downstream price increases on demand for things like cars.

As it happened, the global financial crisis was just breaking, but even without that it was clear that there was a local economic problem.

Turning to other matters, visitor 100,000 to my blogs arrived sometime in the last twenty four hours. I do not know who she or he was, but welcome!

As Tikno pointed out to me in a comment, my first post was back in March 2006. That's a long time ago. It took me a while to get going in terms of regular posts, longer to sort out where my blogging niches might be. Even now my focus continues to shift in light not just of my own writing, but of the conversations between blogs and in comments.

I am actually very lucky in my commentators. Including my own responses, there have been around 164 comments over the last month, mainly on this blog. I also get a range of emails. While this is not large compared to some blogs, it's still a reasonable number.

Importantly, I find the comments very helpful in informing my own writing and thinking.

It's not only the big comments. A short comment by Lexcen led to a total restructuring of my thinking on Australia's so-called culture wars. I had just written a carefully argued post looking at the differences between the US and Australia,a triggered by a post on another blog.

In our discussions I sometimes get tired and no longer want to play. Poor Arthur copped this one recently in the discussion about the role of religion in Australia. Arthur has strong views that he expressed cogently but in a civilised fashion. It had been an interesting discussion that had teased out a number of issues.

I ended up putting a line under the discussion when I found that instead of discussing with Arthur I wanted to argue with him and that, as a consequence, my own position was becoming more rigid. As I said at the time, this was totally a matter of my own responses. I just thought it better to give myself a break, time to think further about the issues involved.

Looking back to March 2006, I find that my views are no longer the same. Of course there are continuities, but there are also substantial differences. I think that's a good thing.

In some cases I have simply worked through issues and, in the absence of reason to the contrary, no longer feel obliged to discuss them. In others, the issues have largely lost their relevance. In a very small number of cases, indigenous issues are the key example, I have simply withdrawn from discussion on current issues because I feel that I can no longer make a useful contribution.

This is an area where I have written perhaps 100 posts across several blogs with a special focus on history and public policy. The views I have developed are just too left field, too far outside the frameworks that dominate current discussion, to be relevant. I cannot see this changing. So in this case, I decided to limit future posts to a small number of areas where I feel that I can still make a useful contribution.

In all this, new issues and ideas keep emerging to stimulate and interest me.

Just at present, I am having a fair bit of fun dusting off my economics. Economics has always been part of my personal tool kit, but it is in fact some years since I worked as a full time professional economist.

At a personal level, the current global economic crisis has its nerve wracking aspects. I did not foresee global economic turmoil at the time I decided to change work directions! Still, I am really enjoying not just trying to understand developments, but also in trying to explain issues and challenges in a way that non-economists might understand.

Enough for this morning. I have some gardening to do.

Thanks, Ramana. I am sure that I will get to 200,000 a little faster. If I maintain last month's stats, perhaps eighteen months as compared to thirty one months. That's actually a lot faster!