It turns out that the latest Australian soldier killed in Afghanistan, Michael Fussell, came from my old school, TAS (The Armidale School). I did not know Michael, he was well after my time, but his death brought very mixed emotions.

TAS has a proud military tradition.

The school was founded as an Anglican boarding school along English lines. As such, it was expected to reflect the philosophy and style of the English public schools of the time. An Englishman, the Rev. William Fisher was appointed as first head.

The school accepted its first pupils in February 1894 in new buildings designed by the architect John Sulman built in paddocks on the eastern edge of Armidale. Sulman had been instructed to allow for 70 boarders, with scope to expand to twice that number. The photo shows the main school building in 1905. 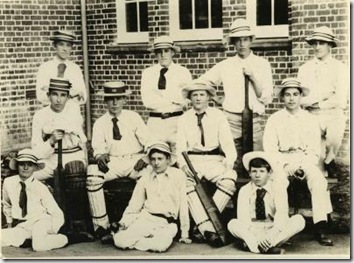 ils and continued to make good progress. A prefectorial system was introduced, sporting teams established who played against local and Sydney Schools and dramatic and musical entertainments produced. The photo shows the School first eleven in 1895.

In 1897 TAS joined the Athletic Association of the Great Public Schools of NSW (GPS) and has remained a member since. In 1899,the Old Boys' Union was established.

Despite the increase in numbers, TAS was still a small school at the outbreak of War in 1914. Most of the boys were country boys were already very good shots, most were good riders, while a cadet unit had been established in 1898. The photo shows the unit on biv 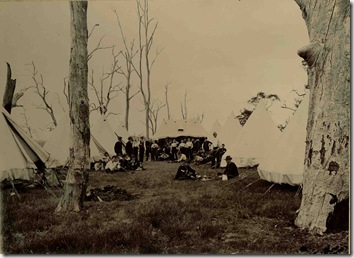 Enlistments were heavy from the start of the War. By the end, TAS had lost 44 old boys and two staff to the carnage. I do not know the total number of Old Boys by then, but this was a high death rate for a small cohort.

After the War, student numbers increased steadily, reaching 140 in 1926. Then came the depression. Numbers plunged to a low of 110. Loans arranged to fund new buildings were now a crippling burden. Staff salaries were slashed, allowing the school to just limp through.

While numbers stabilised, the school still had only 113 pupils in 1940. You can get a feel for the small size of the school from the photo below of the school cadet corp in 1941 being inspected by a visitor accompanied by Gordon Fisher (GAF). GAF had been appointed Head the previous year. 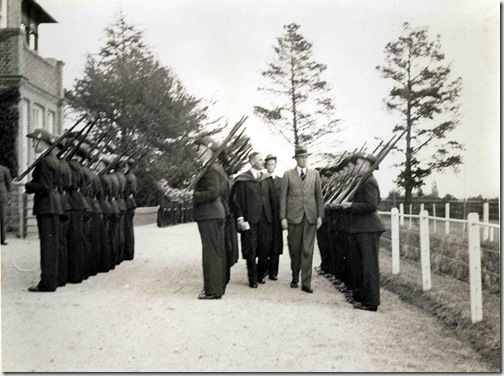 Numbers then grew rapidly to 250 in 1942 as parents shifted children away from capital cities in face of possible military threats. The school itself suffered more casualties. Four Hundred and fifty seven served during the Second World War, with 49 old boys and two staff killed.

When I arrived at the school as a pupil, reminders of the school's military past were ever-present.

It was only eleven years since the Second World War had finished, to be followed by the Malayan Emergency and the Korean War. War books were still very popular among the boys, while war films and documentaries were popular, including the Saturday evening film showing for the boarders.

The buildings themselves were a constant reminder. The Maxwell Library (1924) was named after Lt C F Maxwell killed on the Western Front in 1916 at he age of 24. The school magazine recorded his death in this way:

“His regiment went over the parapet 1100 strong, and that night 98 answered the roll call. Of his company only 20 were left, all ranks. He was wounded early in the engagement, and had he given up and been cared for might have been living to-day but he fought on, taking prisoners and organising bombing for more than three hours At last he was seen to be so weak from loss of blood that he could no longer speak, and kept constantly falling down. He picked himself up each time and still tried to lead, and then even to follow his men. The regiment had to go on and they were finally forced to leave him alone, to die. He had a deep wound near the temple and was rapidly bleeding to death. The body was never found and it is thought that when he could no longer rise, he crawled into a dug-out, which was afterwards blown in by a shell. The trench in which they left him was completely wrecked."

Dangar House (1924) was named after Captain C C Dangar who had first served in the Boer War and then 1n 1917 was wounded while acting as Brigade Major for the Australian Light Horse in Palestine, wounds that he died from the following year. As you might expect given the number of boys who could ride and shoot, the Light Horse was a popular choice.

The school sergeant wore military style dress. Every weekday during the term time, the mid and senior schools formed up by dormitory on front field. The small group of day boys of which I was one counted as a dormitory for parade purposes. Under instructions from the prefects and monitors, the school parade was ordered and the roll called. Once this had been done, the Head would appear. The school then marched to daily chapel.

My own ambivalent attitudes towards the school's military record dates from this period. While I had some country connections, I was bookish, a townie and the son of an academic and did not quite fit in. My first three years at the place were awful, the last three some of the best of my life.

At the mid-point, I rebelled against elements of the school's military flavour, a rebellion that would carry through into university when I registered as a conscientious objector following the start of the Vietnam War and the introduction of the draft.

At school, the deciding moment came when I withdrew from compulsory cadets, prepared to leave the school if required. Despite great pressure, I maintained my position. Finally, Gordon Fisher as head backed my stand. I will always be grateful to Mr Fisher, nor was this the only time that he tried to help me, educate me, give me responsibility.

I have introduced this autobiographical note for a number of reasons.

I hope that it helps gives a feel for elements of the school's past.

Further, I do not want to appear hypocritical in writing to those who have known me from past periods. My views have changed, although my past explains my ambivalence on some matters. I still cannot share in the current Australian interest in, celebration of, military matters. I am too conscious of all those who have died, of the names with the crosses or who were read out in assembly. 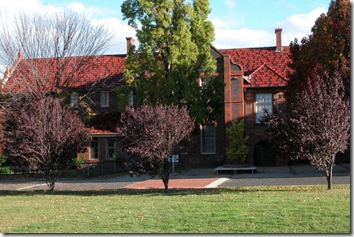 Part of the changes are physical. It is a bigger school in both numbers and buildings. The facilities that students now have would have seemed unbelievable to those who knew the school in the past. It is also a very attractive school in visual terms.

Part of the changes are cultural. As with many aspects of Australian life, the seventies marked a major change decade. The students themselves during that period forced change because they were no longer prepared to accept certain past disciplines. Further, while the school is still major boarding school, day boys now outnumber boarders, changing the school feel to some degree. The junior school is also co-educational.

Like many other Australian schools, the school today is both freer and more rigid than in the past. While pre-seventies students lived under what was a formally strict regime, in practice students had a fair bit of freedom. Some of the things we did would make a modern head's head go white quite quickly!

When I learned about Michael Fussell's death, my first reaction was sadness for he and his family. However, I also felt a sense of pride that TAS and TAS old boys had continued the tradition of service that began all those years ago.

No matter what I may have thought at times in the past, we still need to be able to defend ourselves in a sometimes dangerous world.

To my mind, the school has done a remarkably good job here, progressively adding material. Obviously the material is of most interest to those with connections to TAS. However, it is actually a very useful resource for those with an interest in social history.

There have been a fair number of searches on Michael that have brought people to this or the other post I wrote. For those that are interested, I understand that his funeral will be held in Armidale next Thursday. I am sure that the Armidale Express will carry some details, although its publication cycle means that nothing is on-line yet.

TAS Head Murray Guest has advised that Michael's funeral will be held at Armidale's Old Teachers' College at 10:00am on Saturday 6 December.

For those who do not know Armidale, the TC stands in a prominent position on South Hill. There is plenty of parking around it.

"Michael's body arrives at Richmond at 11.30am Wed (today) where there will be a Ramp Ceremony for family only. There will be a Military Service at the 4 RAR Barracks on Thursday in Sydney. His funeral in Armidale is at 10.00am on Saturday at the Old Teachers College Auditorium."

dear Jim,
I am so sorry to hear about the killed of TAS old boy in Afghanistan. and your story about TAS is impression for me.
I also say a big thanks for your graduation greetings to me. I have read your written in your posting below..and I thank you so much for a lot of your attention and many advices.
it's right Jim that studying is a something that I have emphasized in my life. and I want to continue my study to get master degree.
I also want to work at NGO. it's my ideals. and I feel that it's suitable with my personality. But I am aware so much that it's not as easier as we thought. to get master degree needs much cost. and I endeavor to follow a fellowship, although I know that the conditions is also not easy. It's same with working at NGO or UN. They really need qualified person who have much experience, high education, the ability of language beside English. and I think that it's not easy and it's really need much preparation..so I have to prepare this, as much as I can.
once again I thank you so much for your support, it can killed my pessimistic...