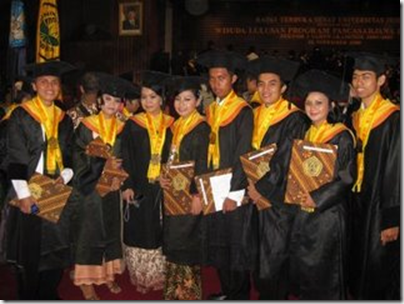 I know that all in our blogging community will join with me in congratulating Niar on her graduation (here and here). Niar is, I think, second on the left in this photo.

I am a fair bit older than Niar, probably older than her father (!), but our discussions have been a pleasure.

Niar now wants to work as a journalist and then do her Masters. After that, she would like to work for an NGO in a third world country.

Niar, no less than six members of my family have worked for the League of Nations, the UN or an international NGO. So that's a great ambition, although I would not rule out studying in Australia even though we speak English!

Niar, just speaking as a dad with girls not much younger than you, keep the dream. As part of this, do keep blogging. The loose blogging network that you are now part of is reasonably high-powered, although some of its members may blink at this description. Yet it's true.

I say this for two reasons. First, the intellectual content is quite high. Second, the network spans countries and occupations. So there are people who can at least give you advice a little bit down track.

There are some issues here that I have been meaning to pick up in a post, perhaps several posts.

As I have said before, I actually think that we have begun to build so 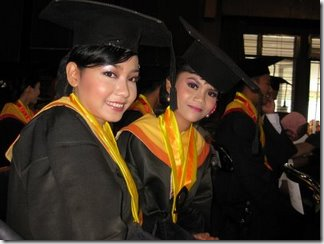 mething unique in our network. I spend a lot of time in the blogosphere. I know lots of communities built around individual sites or causes. So far, I have found very few communities who span sites in a loosely knit overlapping set of communities that hold independent of age, country or ethnicity.

I stand to be corrected here, but I think that its is true.

Finishing, the next photo of Niar again has her second on the left.

Thanks for this posting. Hopefully, one of your reader will find Niar goal, especially from NGO.

Niar, congratulation to you. May God give you the best way.

Down track we might be able to at least suss things out (Australian for find out)for her, Tikno.

While I don't work for an NGO (although that may be subject to change as well), I could certainly give you some perspectives on the role and function of NGOs in developing countries. I am coming to the end of some work that I've been undertaking for the past few years in a Pacific Island Country and could probably at least give you some pointers.

I feel more than a little inclined to do so right now, as today my son completed the qualifications for his degree and will graduate next month - so some fellowship there!

Thanks, Bob. If Niar does not spot the comment, I will leave a comment on her blog.

Very true indeed about blogging.
I also just have a thought if blogging has a nation-border like in the real world. It's not! And I'm so happy about it!

Reach your dream and blog about it, Niar!

I wish all the best to her for taking up NGO as a career. I've read about NGOs in Asia who were working for the benefit of the underprivileged. True spirit they tender.