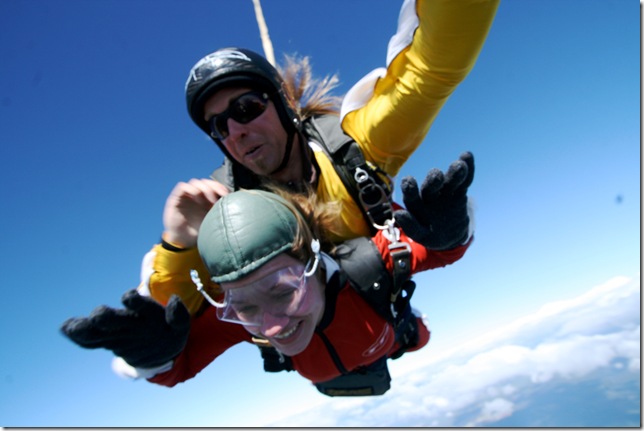 To the airport yesterday evening to pick up youngest on her return from New Zealand. She had a fantastic time.

This photo shows Clare a bit below 15,000 feet. As a parent I bit my tongue a little on sky diving, a little less so on bunge jumping.

It was, to use an Australianism, bloody freezing coming down. Hence the somewhat blue face.

Clare was the only Australian with her tour group. The rest came from Europe, the US and Canada. Clare, as she always does, enjoyed the company.

All parents worry about their children. We have given our girls lots of love, an education and a structured if somewhat chaotic life style. We have also tried to give them the freedom within some limits to take risks, to make their own mistakes. I think that is about all we could have done.

Both girls have worked since they were about 15. Clare largely paid for the trip herself, if with a little borrowing from her mother. We pay rent and most food costs, but beyond that the girls are now largely financially self-supporting. I regret this a little because I feel that the need to work has limited other things that they might do. Still, it is no small thing at present to have good part time jobs and stable work records.

Twelve years ago I made the decision to be the primary child carer. For a major part of that time I have worked from home. There have been very substantial professional and financial costs in terms of opportunity and income foregone. There have also been great personal gains that I would not have missed.

I think that one of the greatest things my girls have given me beyond their love and friendship is that they have kept me in touch. By this I mean simply that I do know something of their generation.

My paternal grandfather was born in 1867, my maternal grandfather in 1890. Both left school at twelve. While I never knew grandfather Belshaw, the world that my various grandparents and their children knew is still very real to me from direct contact and family stories.

Now I live in Australia of 2008. There is an enormous gap between this world and that of my grandparents.

I have no desire for my children to directly experience what it was like to live in working class Lancashire when pit (grandfather Belshaw) or mill (grandmother Belshaw) were the natural end points for a twelve year old. I do not want them to know what it was like in the case of grandfather Drummond to lose first a mother and then a father and to become a ward of the state at twelve.

I would like them to understand how and why it was that in the first part of the twentieth century all the children of poor Lancashire industrial workers came to acquire tertiary education qualifications. I would also like them to understand how the troubled child who became a ward of the state at twelve should become one of the outstanding Australian education ministers of the twentieth century.

When I look at the history of my own family and. more broadly, at history in general, I see how the present stands on the shoulders of the past.

Often in writing about history we look at broad sweeps, at cause and effect. Often we generalise. Always we are attracted by the grand, the apparently big decisions or great men. Yet when I come to look at the detail, I find that many of the most important things came about because individual people tried to do things often over extended periods.

This is, I think, the most important thing that I have learned about history, that is all about individuals doing the best and worst of things for a whole variety of reasons. Further, in the broad sweep of history it is the collective impact of individual decisions that counts.

I wish for her what I always wish for my own daughter Jenny:

That she knows a better life, and that she lives in a better world.

And that she realises her parents really tried to make that happen.

That is a beautiful post Jim. I wish that I could write as well as this about my life!

What a nice thing to say, Ramana. As you know, I do try to write as well as I can, even when under pressure. It's nice to have the effort appreciated.