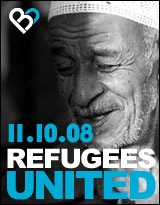 loggers from around the world might combine on 10 November to draw attention to the plight of refugees, as well as to the work of Refugees United in helping re-unite separated families.

My problem in thinking about this was simply to find something useful that I might say. Sometimes the problems seem so great, the solutions so distant, that it all becomes just too difficult.

Natural calamities can force people to flee. More often, it is man's inhumanity to man. Refugees are a reflection of the dark side of the human spirit that still dogs us and may ultimately destroy us.

Yet despite all the problems, I think that humanity has actually made progress at two levels.

At the first level, we are simply better at handling natural calamities. This may sound hard to believe, but I think that it's clearly true. If you look back into the past, famines and other natural disasters went un-checked, even un-noticed.

At a second level, we may not be able to remove the dark side of the human spirit, but we have been slowly introducing mechanisms to at least exercise a measure of control over it. The evolution of the international structures created in the chaos that followed the end of the Second World may have been slow and imperfect, but there has been progress.

I make the point about progress because it counters our human tendency to give up in the face of what seem to be continuing insuperable difficulties.

From a purely Australian perspective, I also think it helpful to remember just how important refugees have been to the development of this country. While most Australians don't think of it in these terms, nearly every Australian has a refugee somewhere in their lineage, or at least knows a present or past refugee.

A very large number of Australians of Irish ancestry have one or more ancestors who were forced to leave Ireland by the potato famine when many Irish simply starved to death. Then, at the end of the Second World War as part of the mass migration program, we admitted hundreds of thousands of refugees, displaced persons they were called, from the chaos of Europe.

These are big examples, but over more than two centuries there has in fact been group after group of refugees, decade after decade, each contributing to the evolving texture of Australian life.

In saying this, I am not saying that Australia can simply admit all refugees regardless. We cannot. I am saying that we should remember our own past in forming our views about refugees.

Looking back over this post, I suppose that there are two key messages in it.

Are you believe that human's compassion will develop in line with the development of the modern world which more individualist.

That's a difficult one, Tikno. Of its self, individualism says nothing for or against compassion. A collectivist society can be just as harsh as an individualistic one when it comes to outsiders.

I think that all people have to fight to maintain compassion in the face of fear and self-interest. I personally believe that as a species we have made some progress over the last few centuries in overcomming our demons.

The subject cannot be handled by individuals except to try and alleviate problems at the micro level.

Political leadership at local levels fails and this is the single greatest cause for refugees seeking refuge elsewhere.

I have blogged about your post in my blog http://rummuser.com/?p=398

RM, while I agree that state or institutional failures are a major problem, I am more confident than you are about the importance of individual action. Will respond on your blog.

HI Jim, you wrote this first.
I also want to write it. Tikno has give me inspiration to write it.
I have known from my Friends thesis about the implementation of refugee law in ILO convention in Aussie.
She argue that the implementation of this regulation cant be go well, because Australia got difficulties to replace refugee from Afghanistan in Australia. Australia get a difficulties because this country is a partner of US. and US is very against with Afghanistan
Is it true sir. thank you very much
nice to read your article about agriculture in Australia.

This is a fairly difficult issue, Niar.

Refugees from Afghanistan rank around third in terms of national numbers. If we look just at religion, those of Muslim faith are over half.

That's fine, but then we have the problems created by the Howard Government.

In recent years Australia has had a problem with people smugglers bringing people, not all refugees in the true sense, into Australian waters largely from Indonesia.

The Howard Government took the view that this must be stopped. The mechanisms they used were harsh and arguably in breech of UN conventions. Many of the boat people were Afghanis, but the policy had nothing to do with national groups nor with Australia's military involvements as such.

Hi, Niar. Re-reading my comment, it could be misleading because I have left a date out.

I wrote:
"Refugees from Afghanistan rank around third in terms of national numbers. If we look just at religion, those of Muslim faith are over half."

In this case, I was referring to the most recent year's data that I had, I think that it was 06-07, not the total refugee intake over time.