Back in January 2007 in Australia and its People - a funny upside down land I reflected on the Australian spirit. The volunteer ethos, mucking in, was one element of this. I have just been reminded of it.

South Eastern Queensland has been struck by severe storms, in some cases the worst since 1974. SES (State Emergency Service) volunteers have been struggling to cope. Yet the Australian spirit still shines through.

When things happen, people just muck in to help. I have seen this in my own life. I can see it again in Queensland. I am not saying that this is uniquely Australian, far from it. But it is certainly Australian.

A story in the Brisbane Times illustrated this. Many people h 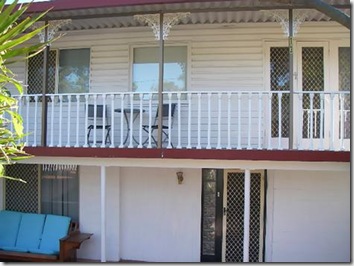 ave tried to help, one offering a rent free house for a period (photo). But I was really struck by the story of a local pub (hotel) manager.

In this case, he and two friends went driving through Brisbane's storm ravaged suburbs in a ute with a tray-full of beer handing out free beer.

Normamby Hotel manager Mark "Trunk" Lassman said it was his was of helping out the victims of the storm.

"I've never done anything like this, before but I have to do something to help people out."

He said it hoped it would bring a smile to their face.

"People are still trying to get electricity and water on, so they're not even thinking about a luxury like alcohol," he said.

"Yeah, I could be handing out soft drink, but I'm a pubbie."

I suspect that the beer was a very welcome relief.

I really touch when I hear the story about volunteer. they can spend their times just to return the spirit of people, and help them whenever they get a trouble. and many Australian do it like in your story...

Thank you, Niar, and many Indonesians too I am sure. Except the beer!