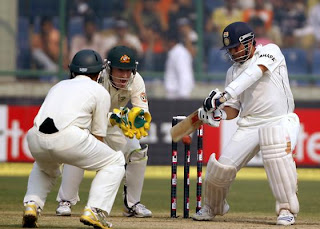 In a comment on Sunday Essay - the strange case of Australia and New Zealand, Ramana suggested that I should have mentioned cricket as another example of a sporting rivalry between the two countries.

Now this is actually an odd one, because the rivalry between the two countries in cricket has been much more muted. The rivalries that dominate Australian commentary on cricket are with England (the Ashes), for a period the West Indies and now Ramana's home country, India.

This photo from the Sydney Morning Herald shows Indian batsman Sachin Tendulkar, right, taking position to play a square cut in the just completed second test, a draw. Like Rugby, cricket is one of those sometimes strange and mysterious games largely but not exclusively played between Commonwealth countries. An artifact of our shared past.

The very language of cricket creates a barrier to understanding. You try explaining that a silly mid-on is not in fact silly, while cricket fields do not really have gullies. And why do so many men stand around in slips, more usually a piece of female clothing?

This US presidential election has really attracted quite remarkable interest, in part because it has been such a history making event. I have not commented to this point, there has really been an awful lot of coverage, so I leave comments to people like Thomas in our immediate blogging environment.

As an aside, Thomas has not been blogging much recently because of other pressures. However, I was pleased to note that he does plan to continue our conversation on the state of the blogosphere.

While I have not commented, I have been watching quite closely. There is great support in Australia for Mr Obama. In fact, It is hard to find anyone supporting Mr McCain. I can understand this. Mr Obama has an almost mesmeric style and his call for change resonates.

In all this, I think that it is important to be realistic. From my viewpoint, the critical issue lies not so much in domestic US issues (that is a matter for the US), but in the implications for the rest of the world. And here I simply do not know.

The new US President will inherit both the US Government system with its divided powers and all the difficult issues - domestic and international - that the US is struggling with. There are no simple answers, so we need to be realistic about what can be achieved. It would take an omnipotent and omniscient being to deliver on some of the expectations that I have heard.

There have been a number of education related issues in the news recently.

One is the impact of the recession on private school numbers.

Recent years have seen something of a flight from public to private education. The reasons for this are quite complex, including the desire of some parents to see their children receive an education more closely aligned to their religion and values.

The funding model introduced by the Howard Government made this flight easier because it introduced a bias in favour of private education. Many schools responded by combining this Government funding with continuing fee increases well in advance of increases in the consumer price index.

This placed increasing strain on parents. In our case, we would never have sent our girls to the school we did if we had known how much fees would increase. Once there, we more or less coped with increasing fees by reducing spend on other things because we did not want to change educational arrangements in the later stages of the girls' education. However, it was a real battle.

There are early signs that the economic downturn may lead to something of a flight back to public education. This puts the advantages of the previous funding model into reverse. Non-government schools are being forced to review fees and cost structures in order to try to hold students.

Public education is meant to be open and accessible to all. That's fine, but the system simply does not have the capacity to cope with a large shift should it occur.

In response to Mr Rudd's call for the state to pick up its game, Premier Reese has promised to do so. However, now we have a potential blow-out in education costs coming on top of the previous blow-out in health costs, and this at a time when revenue has dropped.

One issue that the state is considering is the abolition of the now very expensive free public transport for school students.

There is a case for reform here. It is not clear to me why parents should receive a subsidy to send their child to school independent of location. If parents want to send their child to a more distant school instead of the most convenient one in geographic terms, then one can argue that they should pay the difference. However, complete abolition would add greatly to the cost involved for all parents.

Still on education matters, I have mused on the impact of global recession on overseas full fee paying university students, suggesting that this could have a major impact on Australian universities now dependant on those fees.

Chatting at a function a day or so ago with a senior academic from one of Sydney's universities, I asked about the impact so far on student numbers. The view was that the fall in overseas currency costs because of the depreciation of the Australian dollar provided a very real buffer. However, what I had failed to realise was just how important mainland Chinese students were in the mix, yet another link between Australia and the Chinese economy.

Finally, the first volume of a new biography on former Australian Labor Party PM Gough Whitlam has just been released. I will write a proper commentary later, but I just wanted to note a link with some of the things that I often talk about.

For the benefit of international readers, the Country (now National) Party represents Australia's rural and regional areas and has traditionally been in coalition with the Liberal Party or its predecessors. So there is a political divide. Further, my grandfather was so much older than Mr Whitlam.

While I do not know at this point if the new biography refers to my grandfather or to the relations with Mr Whitlam, it does provide an important insight into the reasons why the two men were friends. In particular, it points to the importance of the Joint Parliamentary Committee on Constitutional Review in helping form Mr Whitlam's views, in energising his belief that change was possible. This is where the link comes in.

In various posts I have discussed Drummond's constitutional views, about the linkages between those views and New England politics and especially the New State Movement, the Movement seeking self government for New England. I have also suggested that the Movement and its sister movements were key drivers in Australian discussions on constitutional matters because they needed constitutional change to facilitate the sub-division of Australia into new entities.

Three years later, in 1956, following constant pressure from Drummond, the Constitutional Review Committee was established. Drummond and Whitlam were members. Unusually, the Committee's recommendations were unanimous across party lines. There were recommended changes to make the creation of new states easier, but the recommendations went well beyond this. Despite the political divides, strong personal links were forged between the older Drummond and the much younger Whitlam.

As so often happens with difficult issues, the Committee's recommendations were largely ignored at the time. However, listening to the radio discussion on the new biography it appears that the impact on Mr Whitlam was far greater than I had realised, extending beyond the personal into the political.

Thank you for responding so fast! Yes, the cricket rivalry between NZ and Australia is much lower than that of the rivalry for the Ashes and now what is between Australia and India. For all that, the Kiwis produce their best cricket when they play Australia.

Beating India is triumphing over your much admired next door neighbour.

Beating New Zealand is just making sure your younger brother knows, and keeps, his place.

Just as it should always be.

Losing to any of the three would be intolerable.

Said with (gentle but competitive) smiles.

Ramana, I did laugh at KVD's comment in the context of yours. Younger brothers indeed, although that would explain why they play their best cricket!

There is still rivalry between the Aussies and the Kiwis when it comes to cricket. Both sides hate losing.

Too right, SBQ. Interesting forum, by the way, for cricket lovers. Click on SBQ's link and you will see what I mean!