On the road to Iraklion

Continuing the story of our Greek trip from Rethymno and the complicated history of Crete, on our second day in Rethymno we drove east to Iraklion (Heraklion). This was a much easier drive than that first drive from Hania to Rethymno. We were much fresher and knew what we were doing. 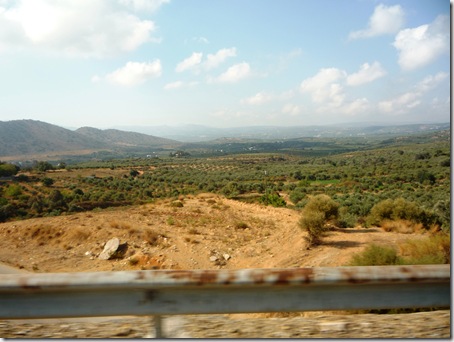 This was my first exposure to the Cretan countryside. Crete has quite a big farming community, although we mainly ate local cheeses, olives, tomatoes and fruit, and drank local wine.

I enjoyed Cretan wine, although my plans to write notes on it were lost in the midst of conversation and the enjoyment itself.

To Australian eyes, the Cretan country was dry, rugged and very rocky. In parts, the hillsides were terraced, I wondered what the living was like. I also wondered just how hard it would be to harvest some of those steeply sloping olive groves.

With so much of the Greek Islands built on hills and cliff tops, we got quite fit. I didn't see many fat Greeks. Most were quite slim, not surprising given the walking. They were also shorter than the average Australian is now.

Growing up, I was tall by Australian standards, six feet, then I seemed to shrink in relative size. It wasn't just a factor of age. The Australian young are much bigger and bulkier than they were. In Greece, I felt tall again!

A fair bit of the road to Iraklion ran near the sea, then plunged inland through the mountains before returning to the sea again. There were some spectacular views. There were also a whole series of not very attractive resort developments.

I did  wonder at spots just who lived in some of the new houses that spotted the hillsides in place. I didn't get photos, but should have, for there were some interesting combinations. The view is obviously important, but there is still something odd to my eyes about a big house or a villa development perched on a rugged hill side, treeless and exposed to the baking sun.

Much Greek construction is in concrete, and then painted. Flat straight lines are interposed with curves and domes. The more utilitarian the building, the straighter the lines. Often, and I am sure that there is a reason for this, the steel rods used for reinforcement in pillars or walls are left poking through the top in clumps.  In places, partially completed and/or abandoned building shells just sit there, minus the walls.

I should qualify baking in the sun a little.

Much of Crete has a Mediterranean climate, North African in the south. During the main tourist season, it is hot and dry. During the winter it is cool/cold and wet, with snow on the higher peaks. Those villas overlooking the sea now baking in the sun are likely to swept by rain and mist, exposed to the storms sweeping in from the sea.

I guess I shouldn't be too surprised at the building.

Greece and the Greek isles have wrapped around them, like Italy and Tuscany, a whole cascading set of images and pictures that gives them an existential reality that can be far removed from on-ground realities. We see the lure in Australia. Just think how much more powerful it must be to those from gloomier climes.