My last post, Journey to Santorini, finished with the bags dropped off at the hotel and us in search of lunch.

Before going on, I should say a little about our hotel, the Kavalari. This was the third time my mother-in-law had stayed there, the second time for my wife. 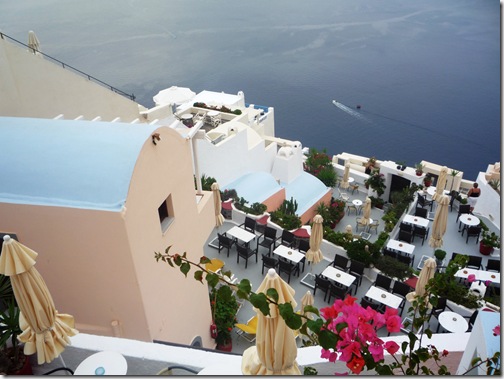 Originally a captain's house, it is partially built into the side of the cliff 300 metres above sea level, with a series of terraces all facing west over the caldera.  The view really is quite spectacular, although the terraces get quite hot in the late afternoon sun.

The photo shows our room (left with rounded roof) with the terraces. The room was pretty, but quite small. It really was a pocket handkerchief!

At the start of my last post I said that we were heading north into the jaws of the tiger that may have closed on the Minoan civilisation, bringing it to an end. Santorini is that tiger.

A volcanic island, it is the most active volcanic centre in what is called the South Aegean Volcanic Arc.  We may call New Zealand the shaky isles, but Santorini rivals it.

Around 3,600 years ago, the Island exploded in one of the largest known eruptions of the more recent past. The eruption left a giant caldera. Around 61 cubic kilometres of magna and rock were expelled into the atmosphere, laying down a layer of volcanic ash up to sixty meters thick. A huge tsunami swept across the western Mediterranean.

This eruption has become the stuff of legend, variously linked to the legend of Atlantis, the parting of the Red Sea and the destruction of the Minoan civilisation.

Whether it did cause the last is in fact uncertain. However, it doesn't take much imagination to understand the devastating impact on the island civilisations of the time. It wasn't just the tsunami itself, but also the immediate loss of shipping and of the trade that was so important to individual communities. Santorini lay unoccupied for the rest of the Bronze Age, during which time the Mycenaeans gained control of Crete.

There have been further eruptions and major earthquakes since then, most recently in 1956 when a devastating earthquake destroyed many of the buildings on the island. The volcano is largely dormant at the present time, but the jaws of the tiger are still there. 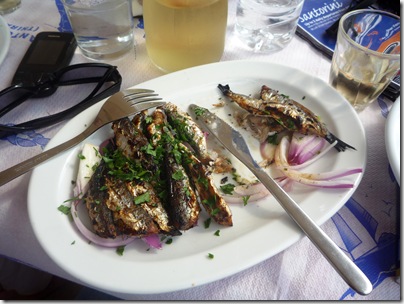 Over lunch at nearby restaurant where I had some of the best sardines I have tasted, we looked at the guidebooks. We all wanted to see the remains of the buried Minoan city of Akrotiri, as well as Ancient Thera.

Now here I need to talk about names. Like many Greek places, Santorini has two names.

The name Santorini (Saint Irene)dates from the Venetian period. Prior to that, it was called Thera. Both names are in use today.

The guidebooks didn't give us enough information on either Akrotiri or Ancient Thera, so we went searching for more, thinking about a possible guided tour.

"No, No", we were told at the first place. "Akrotiri is closed, and there is not much to see at Ancient Thera. Come on our evening boat tour instead." We knew that the tour was popular, eldest went on it when she was staying on Santorini, but were left unconvinced on the other two. We continued investigating.

We found that the Akrotiri site was indeed closed. Here I quote from the Wikipedia entry on Akrotiri:

An ambitious modern roof structure, meant to protect the site, collapsed just prior to its completion in 2005, killing one visitor. No damages were recorded to the antiquities. As a result of this, the site is currently closed to visitors. It was announced in June 2008 that it could remain closed until 2010, at least.

While our friendly tour operator was clearly right on the first, we remained unconvinced with his argument 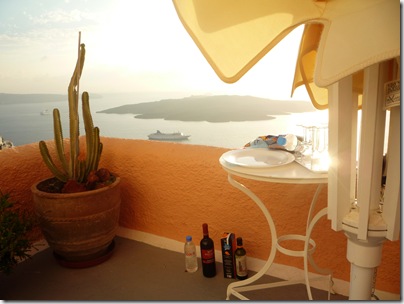 on the second. We decided to go by bus in the morning to Kamari to see if we could get a guided tour of Ancient Thera from there.

After the usual street wander to find a supermarket and buy supplies, we returned to the hotel to gather on one of the terraces for a late afternoon drink. Boy was it hot!

I really hadn't comprehended just how popular a tourist destination Santorini was until then.

In Sydney, people get excited if two or three tour boats are in town at the one time. Santorini was coming to the end of the tourist season. Even so, up to four boats arrived every day. The pattern was always the same.

There was considerable jockeying for the best place to park. I know park is the wrong word, but I can't use anchor since some of the ships didn't seem to anchor at all.

While in port, passengers went ashore in clumps, all  wearing tags. It was a bit like watching sheep being herded, with the drover at the front carrying a stick with a number above his or her head while constantly monitoring the flock for strays.

We got to know those ships pretty w 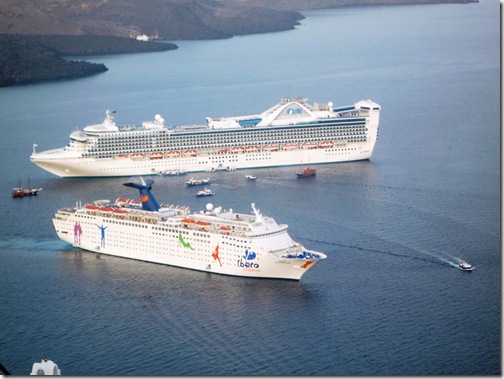 ell from our cliff top retreat.

The Ibero cruise ship in the front was one of the most tightly controlled I saw.

You got them out of the ship, up the cliff, round the town, down the cliff, back into the ship and then off. The poor sheep really didn't have time to do anything. All this meant that the streets crowded and then cleared and then crowded again.

What I hadn't expected was that we would see the same ships again and again. I don't know why I was surprised. After all, they were going to the same destinations that we were, but I was. So we saw the same patterns repeated.

On Rhodes, our hotel owner complained: "They crowd the streets for other visitors, but don't buy anything." I could see her point, but the cruises are still very important to the economies of the Greek Islands.

Dinner and then to bed. Tomorrow Kamari and Ancient Thera.

Jim, being boring again I guess, but this is really very interesting. Can I quote something please:

According to Herodotus, following a drought of seven years, Thera sent out colonists who founded a number of cities in northern Africa, including Cyrene.

In the 5th century BC, Dorian Thera did not join the Delian League with Athens; and during the Peloponnesian War, Thera sided with Dorian Sparta, against Athens.

Probably it is just my junior school history of Egypt, Greece, Rome, England (never mind the rest, and forget the gaps!) poking its head out - but I am enjoying your "walk with the ancients".

I should have added for comparison that while I enjoyed your China impressions, I struggled to identify with the people and the places. Just my personal baggage I suppose.

We all carry our baggage with us, KVD. I enjoyed China because it was different. I enjoyed Greece in part because I knew so much about it.

Well, tomorrow you will see the remains of the small city that Herodotus spoke about. I had already mentioned water, but will come back to that.