Ruins, hats and forts in Iraklion

On leaving Iraklion's Battle of Crete Museum (Arrival in Iraklion) I found my way to the place where the rest had gathered for lunch. This proved to be the place where all the bus drivers bringing tours to the Archeological Museum gathered. Not posh, but quite cheap.

From here we struck of through town looking for a place to check ferry tickets, but also on our way to the Venetian fort. Here I need to introduce you to another feature of the trip, ruins. Not great 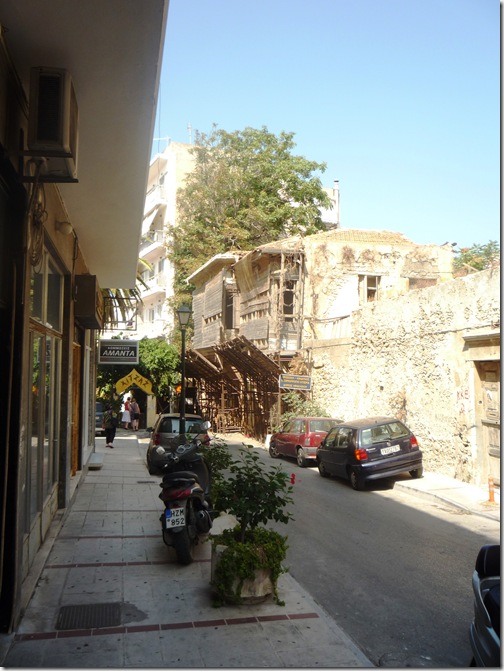 archaeological sites, but ruined houses. This one shows one such in Iraklion.

Why ruined houses? Surely a strange thing to look at?

Well, there were a number of reasons for this obsession.

To begin with, it gave us a feel for different types of construction, including thick dry stone walls that were then thinly rendered and covered with some form of wash.

Fellow blogger Helen Webberley had a fascinating post, Colourful islands and coastal cities, showing the way in which variations in colour gave different places their character. This is certainly true of Greece; colour gives often similar constructions a different look and feel.

Its something that Australian towns could learn, but that's another story.

I found it interesting, too, that older buildings were fixed up, real ruins that in Australia we would condemn. Again, that's something that Australian towns could learn.

We kept walking past the now being rebuilt ruined building towards the port. Near the port we stopped so that Dee could check ferry tickets. Here we waited and waited. I did not begrudge the time.

I am reasonably organised, but Dee makes me look like a pussy cat. By the time she was finished, everything was organised. We had our on-line bookings already, but now we had all the paper work we required to board. This type of th 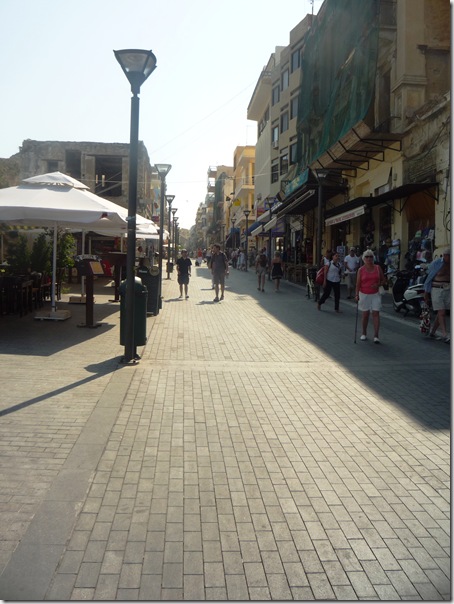 ing really eases all the stress and uncertainty of departure.

As we waited, I did my usual trick of wandering around.This photo shows the view up Iraklion's main drag. You can see all the square concrete buildings that I talked about in an earlier post plus some of the colours.

I had arrived in Crete without a hat and only one pair of shorts. Getting away had been chaotic and I really hadn't focused on the weather. It was hot. Now, ferry tickets in hand, I was marched off to get a new hat; sandals and a pair of shorts would be added a little later.

From here we walked down to look at the Venetian fort guarding the entrance to the old port.

Venetian Iraklion, Candia it was then called, must have been quite a considerable place.

Under Venetian rule, it became the seat of the Duke of Candia. As a result, the whole Venetian administrative district of Crete became known in Italian as "Regno di Candia" (Kingdom of Candia).The Venetians built huge walls to guard the city, along with the fort and other military buildings including large arsenals.

The walk to the fort took us down past the old harbour and along a breakwater past fishing boats. One surprise in the Greek Islands was the absence of fish. I had expected there to be lots of fish based meals. This proved not to be the case. Further, some of the fish that was on sale was in fact apparently imported from China.

Iraklion itself is still a working if small scale fishing port. The fishing b 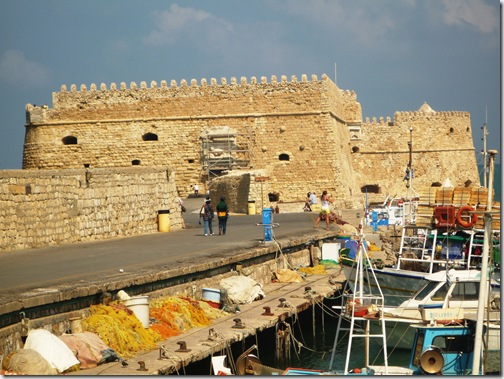 oats tied up on the right of the photo were all small, some very small, but came in a variety of shapes and size.

Unfortunately, I didn't take any photos. After running out of battery, I had put another battery in the camera, but it too needed charging, so I was guarding my shots. I say unfortunately, because there were some good shots of fishermen mending their nets or simply smoking while they hard a yarn.

As an aside, modern travellers carry so much battery or electric operated kit now that charging or connection is an an issue. In our case, there were five mobile phones, two digital cameras plus two lap tops. Even though we had some cables and converters with us, simple things like re-charge were a constant problem.

Returning to the fort, as you can see from the photo, it is a well preserved and visually attractive building. The lower floor contained barracks and storage areas. Youngest who is into things goth, immediately saw the party possibilities. My immediate reaction to this suggestion was more prosaic. Shuddering at the thought of cleaning up broken glass, I immediately advised plastic cups! Guess I'm getting old.

The interior was pleasantly cool on a 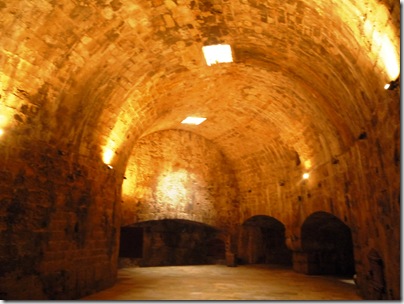 hot day. It would have been very different during the winter wet season.

Water is a problem in forts. You need water supplies, but you also need to be able to get rid of water. I wondered what the place would have been like on a cold wet day with moisture running down the walls, cold damp rusting armor, moldering food. Quite unpleasant, I suspect.

I also wondered about gunpowder. Visiting Europe a few years ago, we saw displays of changing military weaponry at St Marks in Venice and then Castel Sant'Angelo in Rome. Gunpowder changed the military equation, reducing the value of heavy fortifications.

Walking around, I couldn't remember dates, so had to look them up later. Gunpowder had yet to reach Europe in 1204 when Venice purchased Crete. By 1669 when the city fell to the Ottomans, gunpowder was widely used. Even so, you can see how strong the fortifications were when you consider that it took a twenty two year siege before the city fell. 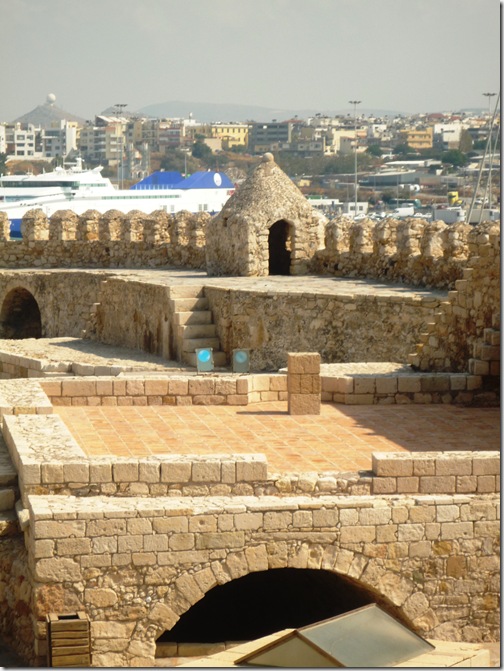 The last photo shows a view of the fort from the top. It also captures the juxtaposition of new and old that marks Iraklion and so much of the Greek Islands.

From the Venetian fort, the eyes move across the modern ferry boats through modern Iraklion's cement buildings to the radome perched on the ancient hills beyond.

It was now time to leave to visit the Minoan ruins at Knossos.

Leaving the fort, we walked back along the waterfront to the Ferry Terminal where the car was parked.

It was again time to brave the city traffic on another venture into the unknown.

Fish 'imported from China'. Seems as though this part of the Mediterranean has been a little overfished.

I wondered about this one, Russell. You may well be right. I will try to find out at some point. Or someone else may know and tell us in the meantime.

I hope that this email finds you well.

I recently came across belshaw.blogspot.com whilst researching the Travel and Vacation sector and would like to discuss the possibility of paying you to display an advertisement on the site.

We have a large customer base of clients prepared to pay to display discrete adverts, contextually matched to the content of the page on high quality sites like yours, and this can be a great way to generate an income without compromising your website.

Please email me back if you would be interested in finding out more and I will send you a follow-up email outlining the opportunity in more detail.

I look forward to hearing from you shortly.

Hi Jacqueline. Happy to discuss. Suggest that you email me direct ndarala(at)optusnet(dot)com(dot)as