I deliberately left my last post, Knossos and the Minoans, up in the air with the Minoans riding high. I will return to the story when we get to Santorini. You see, there was arguably something rather volcanic about the fall of Knossos.

By the time we got back our friendly Hotel Leo from Iraklion the night before, I was very tired. All the travel was catching up with me. We gathered for snacks and a drink from our own supplies, and then went out to dinner. It was quite a nice restaurant in the usual narrow alley way. I lasted just the first course, and retired to bed.

Day 5 dawned warm and bright. This was our last day in Rethymno.

We had breakfast in our hotel alleyway to discuss the day. Each day, the hotel served a different breakfast for its small number of guests. There was always freshly squeezed orange juice and Greek yogurt, but beyond that it varied. 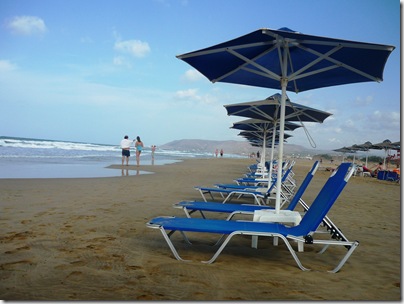 As always, shopping was on the girl's itinerary for the morning, and then wife, daughter and mother-in-law decided to go the beach, one that we had seen on the trip to Iraklion. This is the beach in question;  pretty enough, but not enough to make we want to stir. Call that sand?

Wandering down the stairs on our first day in Rethymno, I had found a strange sight on the first floor lounge: an ice bucket filled with a champagne bottle, a plate of fruit in cellophane, plus sitting neatly beside them a copy of John Marsden's Tomorrow When the War began. It was a strange combination, for this is a very Australian book.

The morning of day 5 I found the book sitting in the hotel's book box. Since  had just seen the movie, I  promptly borrowed it. I decided to spend the rest of the day just pottering and reading, something I really enjoyed. 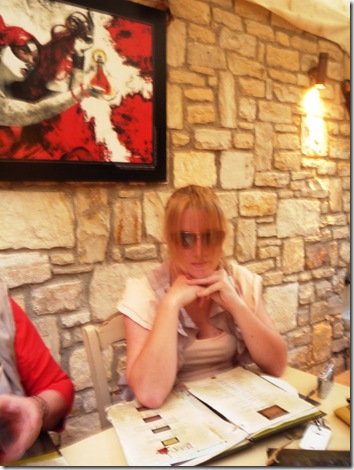 That night we went out to dinner at yet another restaurant.

Before going on, this is a rare photo of youngest in demure pose. It's a bit blurred, I accept, but demure? Compare it with this shot!

I haven't spoken yet about Greek food. in my guise as a travel writer, I was going to take detailed notes on food and wine. In practice, other things kept intervening.

I also thought that a lot of Greek food was very ordinary indeed. I really don't want to write something that focuses on the ordinary.

There were exceptions, and this night was one. I did promise the owner that I would write a story and will do so. However, I am going to do so as a short separate post so that the search engines will pick it up.

As we walked back to the hotel through the still crowded alley ways, I thought that I like Crete, I like Rethymno. We had barely touched the surface, and now we had to move on.

This view grew as we travelled through Greece. I really would like to return to Crete, with Rethymno as base. This next time, I will see if I can really dig into ordinary Cretan life.