Fair crack of the whip

Fair crack of the whip is an Australian phrase meaning give everybody a fair go. If used in a particular tone, it means that the other person has not done this.

I had thought that fair crack of the whip was just an Australian phrase. Searching around, I could not find out when it was first used, but it does seem to have been British as well, if not first.

I mention all this because the other night I learned something about the actual crack of a whip that I had not known. 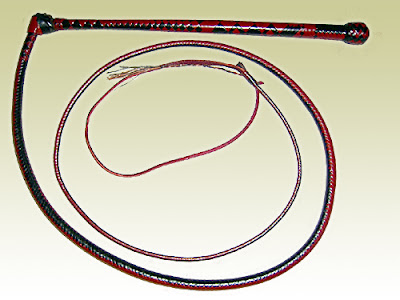 The Australian stock whip is made up of a handle with a long leather tail split at the end.

The tail could be pretty long. A bullock driver, for example, needed a long whip to reach the front bullocks. Experts could crack the whip so that the split at the end reached an exact spot on the leading bullocks.

The term crack came from the sound, a cracking noise.

My brother and I were townies, town dwellers. Still, the whips were around and we tried them.

It's actually very hard to make the whip crack. You are likely to get it tangled around yourself or anything else in the neighbourhood. Still, I did get it right sometimes.

I was fascinated to learn the other night from a British TV show that the actual crack is, apparently, a mini-sonic boom brought about by the speed of the split end.

I am not sure about this because you can get something of the same effect by cracking a beach towel. This can be quite painful properly applied! I very much doubt the towel gets to the required speed. Still, it's interesting.
Posted by Jim Belshaw at 6:36 am

Yes, well here I am, bags packed, standing on the dock at Rethymno, waiting to journey on...

It seems cousin Jamie has cracked the whip in a different direction for the moment, but I for one hope he will relent at some stage, and allow a little more of your Grecian meanderings to be published.

I will move you on, although if you are standing at the docks at Rethymno you may miss the ferry! If you can get to Iraklion, the ferry will leave either tomorrow or Sunday.

I will finish the series, because I was finding it personally fun!

I believe it might actually have been Australian before it traveled to Britain. I remember when I first came to Australia for a holiday, we visited a ranch for sheep and cattle and watched a show where a man used a whip and cracked it many times with differing levels of sound at an ease I didn't think possible. Though it may, as you have said, travelled from Britain to Australia, I find it hard to picture a cultivated British person or a Cockney speaking Brit to say 'fair crack of the whip' :P

That's very interesting, anon. You are actually lucky to have seen/heard that. It's much rarer now. I, too, find it hard to imagine a British person actually using the phrase. I must do some more digging!