The remarkable story of Arthur Evans

My last post on out Greek trip, Mad, bad and dangerous to know, finished with the observation that my interest in Minoan Crete lay not just the sense of discovery going back to Ceram's Gods, Graves and Scholars. More importantly, here was a civilisation that did not quite fit in, that pre-dated the historical models that I had absorbed. Greece was 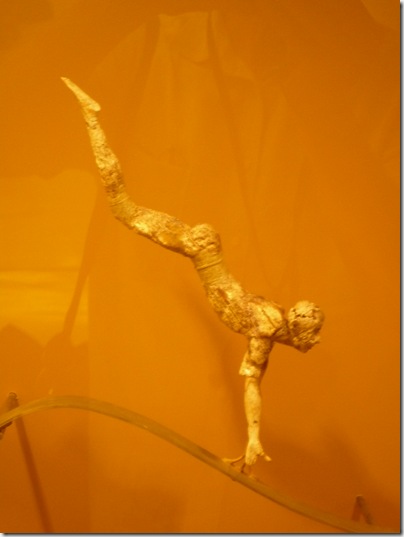 more than just Athens or Sparta.

There is always an issue in visiting ancient sites whether to go to the site first or to the museum. In our case (Arrival in Iraklion), circumstances dictated museum first. I actually think that's better. A ruin is a ruin. It becomes more as you add life, populating the buildings with the people who used to live there; how they slept, how they dressed, what they did, what happened to them.

Where, as in my case, you have wanted to visit for a long time, there is also a risk that reality may disappoint. This actually happened on this trip at spots, but not at Knossos. The Minoans really were a remarkable people whose life displayed grace and complexity.

The site at Knossos lies on the outskirts of modern Iraklion. As we drove through the crowded streets full of people busy with their daily concerns, I mused on the remarkable story of Sir Arthur Evans. You see, we don't know what the Minoans called themselves. It was Evans who named the civilisation after King Minos because the structure of the palace at Knossos reminded him of the famed labyrinth.

There appear to be two different versions of the Minos story.

In the first version, Minos reigned over Crete and the islands of the Aegean Sea three generations before the Trojan War. He lived at Knossos for periods of nine years, where he received instruction from Zeus in the legislation which he gave to the island. He was the author of the Cretan constitution and the founder of its naval supremacy.

The view from Athens is very different. In Attic tradition and on the Athenian stage, Minos is a cruel tyrant who exacts tributes of Athenian youths to feed the fabled Minotaur.

This second tradition forms the base of part of Mary Renault's The King Must Die, the story of the early life of Greek hero Theseus. 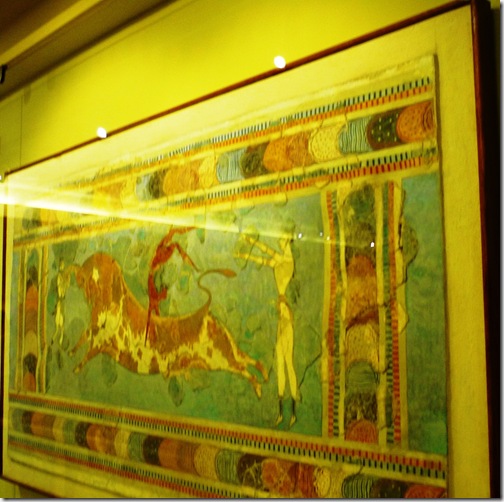 Renault takes the mythical stories and turns them into the type of historical story that might have formed the base for the later myths.

As part of this, the Minotaur turns into the Minoan bull dance in which dancers have to catapult themselves across the bull's back. It looks all very graceful in the fresco, but must have been quite difficult and dangerous. A new extreme adventure sport for New Zealand perhaps?

Arthur Evans (also here) was born in England in 1851. This was a very particular time in English history when a passion for the past combined with an interest in collecting was transforming antiquarianism into the new disciplines of archeology and philology. It was also a time of growing wealth flowing from the industrial revolution.

John Evans, Arthur's father, was a business man with a share in a paper mill. This was important, for money from the business would ultimately help fund excavations at Knossos. John Evans was also an antiquary, numismatist, geologist and archaeologist, publishing works on all these topics. Arthur inherited these interests from his father.

To my mind, Arthur Evans was something of a restless soul. He had a good education, but was more interested in adventuring into the wilder parts of Europe. In company with his younger brother or a friend, he visited Lapland and explored through the Balkans, sometimes with gun in hand. Between Between 1877 and 1882 he was Balkans correspondent of the Manchester Guardian, reporting on a revolt of the Serbs against the Ottoman Empire. He became an expert in what was called the Eastern Question, the issues and problems created by the d 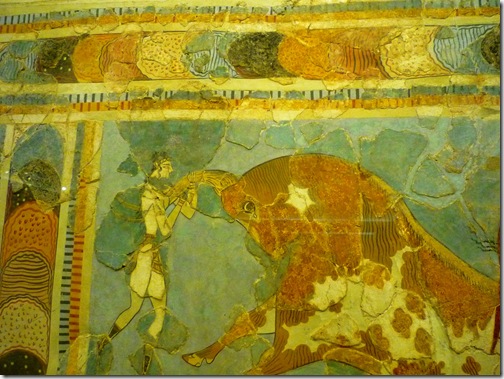 From the beginning, Arthur Evans kept detailed notes, along with drawings and maps. He also collected historic gem stones, an interest that finally led him to the site at Knossos.

Evans did not discover the site. That honour belongs to  Minos Kalokairinos, a Cretan merchant and antiquarian who found the site in 1878. Kalokairinos conducted the first excavations. However, the difficulty that he and others faced at the time was the refusal of the Ottoman authorities to grant the necessary excavation approvals.

Excavations began in 1900. Assisted by Dr. Duncan Mackenzie, who had already distinguished himself by his excavations on the island of Melos, and Mr. Fyfe, the British School at Athens architect, Evans employed a large staff of local labourers as excavators; within a few months the team uncovered a substantial portion of what Evans named the Palace of Minos. The results were 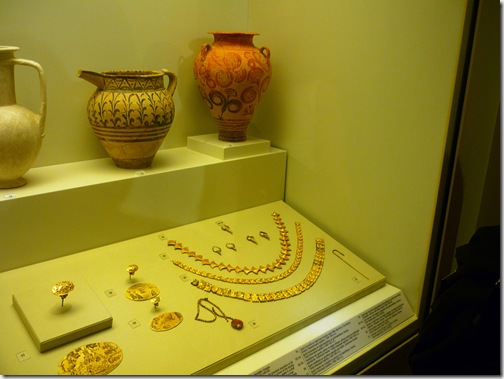 a treasure trove of buildings  and artifacts.

There is considerable controversy about certain aspects of Evan's work, something that I will talk about in my next post. For the moment, you can see why I found the story of Knossos so fascinating as a child. It, along with the parallel stories of Mycenae and Troy, had everything that a boy could want. Adventure, the lure of the unknown, buried treasure.

We can see this today in Indiana Jones, Lara Croft or the books of Andy McDermott. It's odd, actually, for these books or films are also wrapped in their own mythology. There seems to be a need in our modern secular society for something that will take us out of the mundane into a world that's just as strange and complicated as the original Greek myths!

In my case, the childhood fascination took me on a journey that almost, not quite, ended in me becoming a professional archaeologist, if with a specialisation in Australian prehistory rather than Europe or the Middle East. Had I been less interested in other things, had I got the marks that would have allowed me to go straight to a PhD, then the world would have been different. The need to do a masters first was just too much of a hurdle. So events shape us. 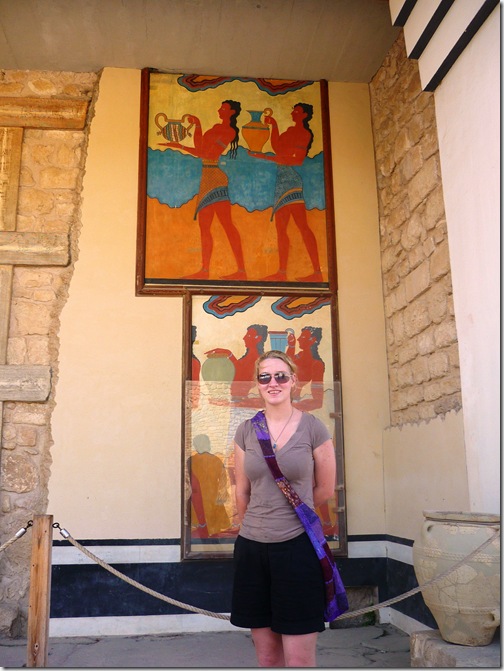 Now, all these years later, Clare (youngest) is doing Ancient History at Macquarie University and talking about becoming an archeologist. As part of this, she is planning her exchange at a Greek University.

I don't know whether this will in fact happen. Like her father before her, Clare has many interests, including a passion for writing and for all the possibilities opened up by the new media.  Like her father before her, she has too many interests and a tendency to go all over the place. What I am sure, is that he interests will take her in directions that none of us can forsee.

In Arthur Evan's case, Knossos became the defining moment of his life. He became a rampant Cretanphile, spending the rest of his life focused on Knossos and the Minoans.

Evans and Knossos are inseparable. It's not just the academic interest in the Minoans, but the millions of tourists who visit. The Minoans are alive in the present because of Evans. His contribution to the modern Cretan economy is huge. It's not a bad end result for a man who failed to get an Oxford fellowship!

Great post Jim. Shame in some ways that we ever let you leave the Med! And once again the photos are great.

btw, tv on in background watching the golf, and there's a very good UNE advert being given a run.

Thanks, KVD. These posts have become a real indulgence. Here I am still on the third day of the trip!

It's a luxury to let my mind wander, following up leads to explain things, to try to make the story personalised and interesting.

I am glad you continue to like the photos. Between us, Clare and I have more than a thousand shots all sorted by location. Many are very bad! The challenge is to find the photo that while not the best actually best brings the story alive.

If you look at the detail of the bull's head, you can see just how bloody dangerous bull dancing was!

Glad you liked the UNE ad. As you know, I get very frustrated at the failure of metro students to see what is on offer there.